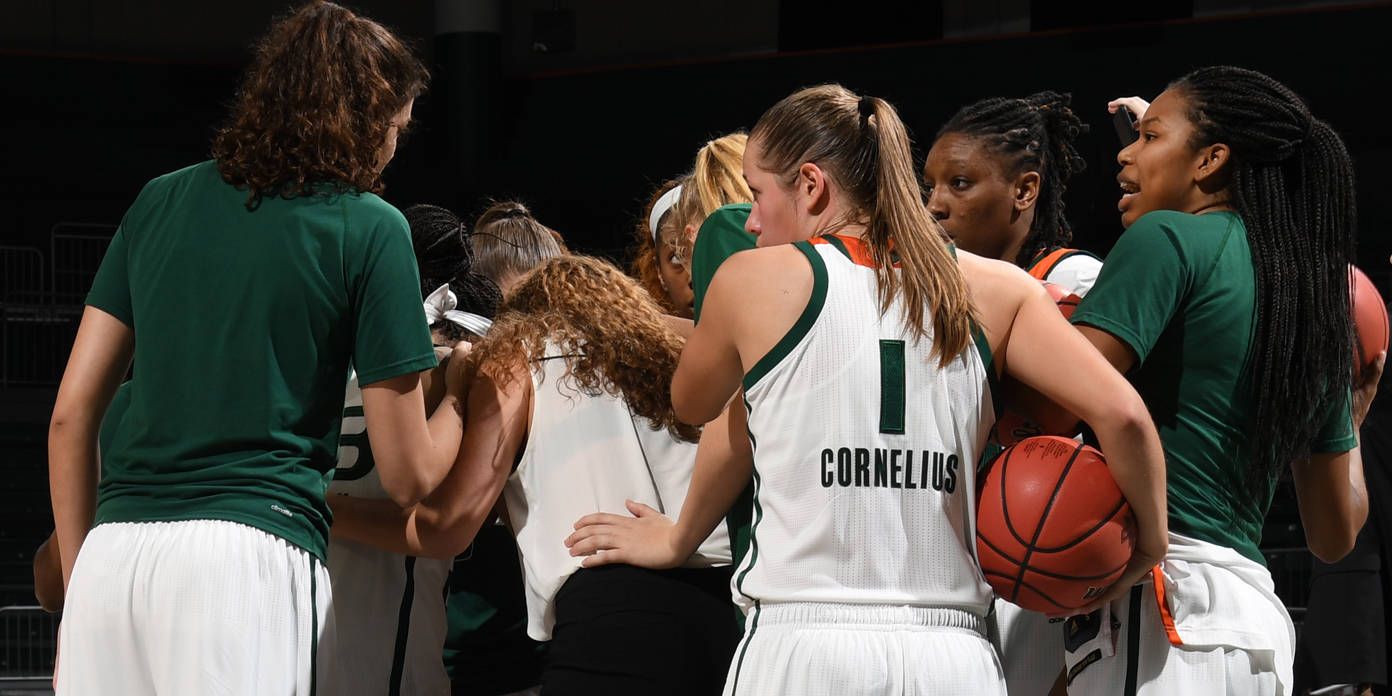 @CanesWBB Falls to Quinnipiac in NCAA Round of 32

CORAL GABLES, Fla. – The University of Miami women’s basketball team saw its stellar 2016-17 campaign come to an end Monday night at the Watsco Center in the second round of the NCAA Tournament.

“That was just a great performance by Quinnipiac, just phenomenal,” Miami head coach Katie Meier said. “The assisted field goals [for them was] 24-for-28, but that was the one thing I was concerned about, and the one thing we tried to disrupt. And, boy, did they find and hit. It wasn’t lack of effort.”

Sophomore forward Keyanna Harris and senior guard Jessica Thomas both connected on a pair of 3-pointers and scored 10 points for Miami in the opening quarter.  Harris did so in the game’s first six minutes, giving her double figures in a contest for the sixth time in her career.

The Bobcats finished the first half shooting 9-of-15 from 3-point range. Meanwhile, Thomas had 17 of her career-high 25 points at the intermission, the second-most by a Hurricane before the break this season.

The Hurricanes pulled within one point, 71-70, with 3:22 left in the game, but were unable to tie the score or take the lead, as the Bobcats held on to earn the narrow victory.

Along with Thomas, Hayes also finished with greater than 20 points, pouring in 21 on 8-of-12 shooting to go along with a season-high-tying four assists. It was the eighth 20-point game of Thomas’ career and her fifth of 2016-17, while it was the seventh of Hayes’ career and her third this year.

Harris, with 10 points, tied for the third-most in her career, was the third Hurricane to finish with double-digit points.

This served as the final game as Hurricanes for Thomas, Hayes, guard Adrienne Motley and guard Nigia Greene.

“They carried the banner, and they did everything I needed from them,” Meier said of her senior class. “So, I love them and we’re going to be in each other’s lives forever. This isn’t the end of our journey together, but it’s the last time I got the honor and pleasure to coach them and that hurts a lot, too.”

In addition, Harris’ 2-of-2 mark from 3-point range—the second time in her career she has made multiple 3-pointers—places her second on the 3-point percentage list and Motley’s two blocked shots tied for fifth place.

The Bobcats’ 15 3-pointers set a season high and were one shy of the most in program history. Prior to Washington connecting on 18 3-pointers in its win Monday, the 15 would have been one shy of an NCAA Tournament record and would have set a second-round record.

The Hurricanes, playing in front of a program record crowd for student attendance, entered the game third in the ACC in 3-point percentage defense (.284) and had not allowed greater than nine 3-pointers in a contest this season.

“I just want to say thank you for the administration and the community and all the support we got because I’ll never forget that,” Meier said. “It really meant a lot. Thank you.”

·         Thomas’ 17 first-half points marked the fifth time this season a Hurricane has reached at least that many in a half, including the fourth time she has done so.

·         Thomas made her 100th start as a collegian, Hayes eclipsed 750 rebounds in her career and junior forward/center Erykah Davenport surpassed 450 rebounds at Miami.