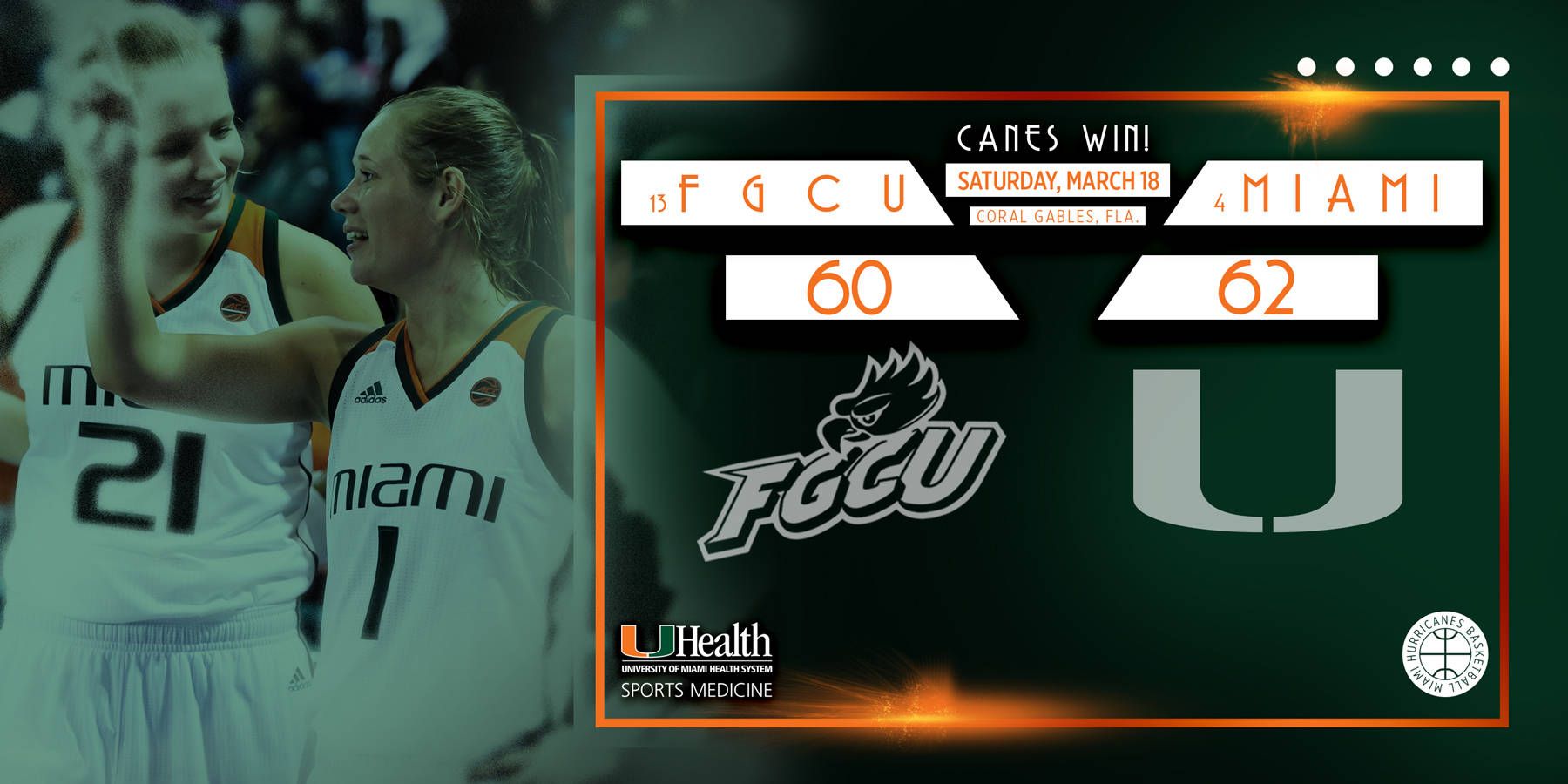 CORAL GABLES, Fla. – Playing an NCAA Tournament game on its home court for the first time in 24 years, the University of Miami women’s basketball team earned a thrilling 62-60 victory over FGCU Saturday evening at the Watsco Center.

“Faith,” Miami head coach Katie Meier said of how the Hurricanes were able to pull out the victory. “We talked about it before, during pregame . . . Faith is confidence with a little bit of patience, and I said we are going to need patience. It’s not enough just to be confident, there has got to be some trust and some confidence to that patience.”

After FGCU (26-9, 12-2 ASUN) jumped out to an 11-8 advantage at the first media timeout, Miami countered with a 6-0 run to go in front by three. The Eagles scored the final basket of the period and the Hurricanes led by one, 14-13, through 10 minutes of action.

Miami did not allow a point in the second period until there was 5:38 on the clock, making it a stretch of five minutes and 49 seconds during which it did not concede a point. The Hurricanes would go on to push their lead to 13, 28-15, with 3:30 to go before the break. FGCU closed the frame on a 7-0 run and Miami held a 28-22 edge entering the locker room.

Miami scored the first six points of the second half to stretch its lead back to 12, while holding FGCU scoreless for the first three minutes and two seconds of the session. The Eagles finished the period on a 9-4 run in the final two-and-a-half minutes and the Hurricanes’ cushion sat at four, 43-39, entering the last 10 minutes of action.

FGCU tied the game at 51 with 4:22 remaining and then took its first lead since 11-10 with 1:53 to go, grabbing a 54-53 advantage. After the teams exchanged baskets, sophomore forward/center Emese Hof converted on a three-point play with 49.4 second left to put Miami up by two.

Following a free throw by the Eagles, sophomore forward Keyanna Harris, who played a career-high 29 minutes, gave Miami a 60-57 edge with 16.1 by connecting on a pair from the line. Redshirt junior guard Taylor Gradinjan evened the score on a 3-pointer with 8.6 ticks left.

Miami then went back to Hayes, who logged the 14th double-double of her career, on its final offensive play, and she converted down low in the closing seconds. A stellar defensive play at the other end by Harris sealed the scintillating win for the Hurricanes, who are headed to the second round of the NCAA Tournament for the second time in three years.

Along with leading all scorers, Hayes’ 10 rebounds also paced all players, as she tallied her fifth double-double of the year. Hof finished with a co-season-high 14 points, while senior guard Jessica Thomas had nine points and sophomore guard Laura Cornelius added seven go along with a season-high seven rebounds.

Miami finished the game with a 41-26 lead in points in the paint and held a 12-2 edge in second chance points.

“We have some work to do,” Meier said of the mentality entering Monday’s second round contest. “We didn’t play extremely well and we need to play better to advance. A lot of the credit goes to FGCU and what they forced us into. We worked really hard to take a lead there in the first half. We have to take care of business and keep our focus for 40 minutes.”

The Hurricanes will now take on No. 12-seed Quinnipiac Monday at 9 p.m., at the Watsco Center with a berth in the Sweet 16 on the line.

·         Both teams’ leading scorers on the season fouled out of the game. FGCU’s Julien registered her fifth foul with 3:54 remaining and Miami senior guard Adrienne Motley did so with 1:55 on the clock. It was just the third time in her career Motley fouled out of a contest.