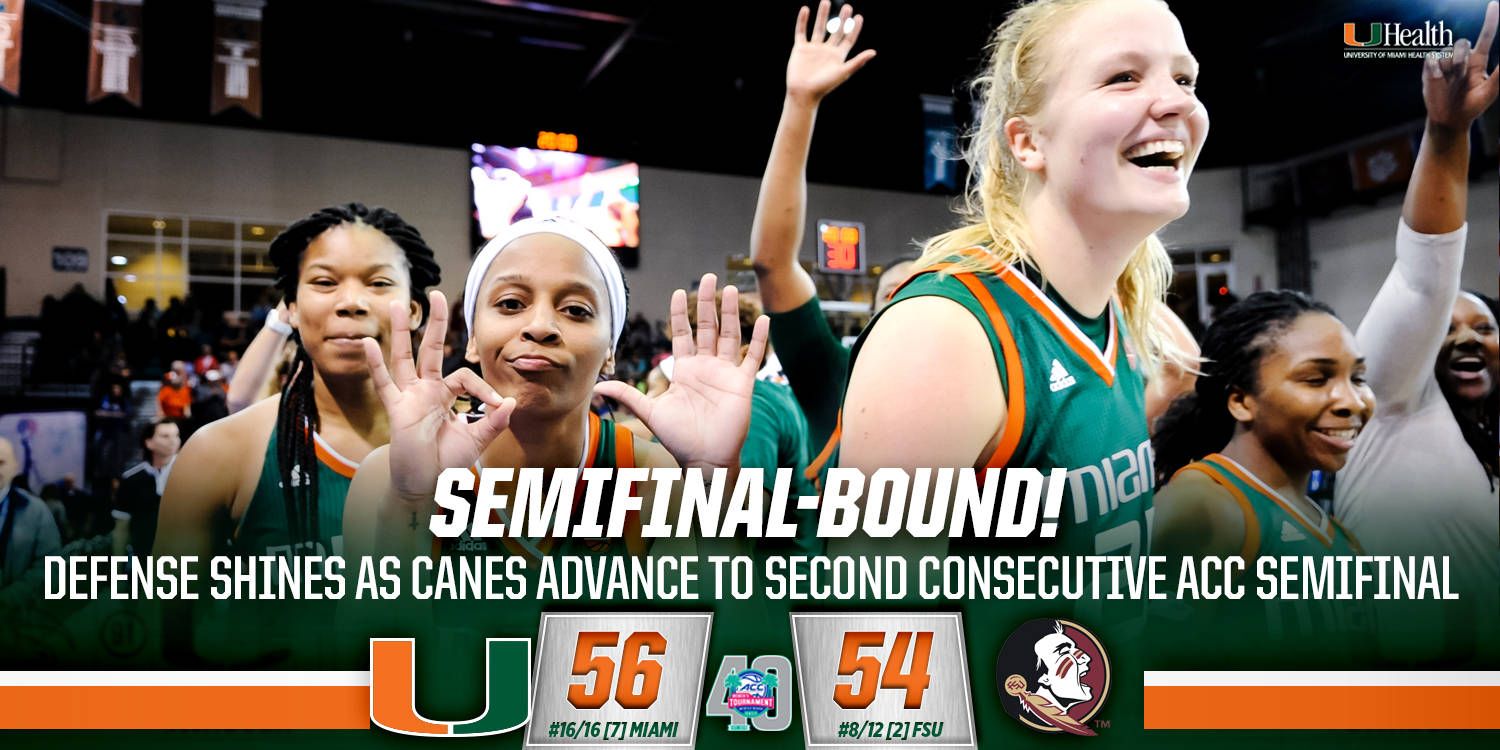 For the second straight season, the University of Miami women’s basketball team knocked off a Florida State team ranked in the top 10 in the quarterfinals of the ACC Tournament.

“Both times we played them, we were really aggressive to start. We let them know we were here,” Miami head coach Katie Meier said of the back-to-back postseason wins over the Seminoles. “We don’t lose that many games during the season and we sure don’t like that they represent 30 percent of our losses. That does get to us. We are not going to lose to a team three times in the same year, especially not Florida State. That’s the mentality and we sort of said that out loud.”

The Hurricanes, who forced four turnovers in the first two minutes and 20 seconds, raced out to an 8-0 lead, including making three shots before Florida State (25-5, 13-3 ACC) even attempted one. Miami would go on to take an 18-13 lead at the end of a first period that was capped with a buzzer-beating jump shot by senior guard Adrienne Motley.

Miami used a 13-4 run, including a personal 7-2 stretch by redshirt senior forward Keyona Hayes, to build an 11-point lead, 33-22, with 1:49 left on the second-period clock. The Seminoles scored the final three points of the half and the Hurricanes led, 33-25, entering the locker room.

The Seminoles pulled as close as four in the third frame, but Miami stretched its advantage back to eight, 48-40, entering the final session. Sophomore guard Laura Cornelius scored the Hurricanes’ last six points of the quarter in a span of one minute and 12 seconds, capping the session with an acrobatic, contested layup in the closing seconds.

With 1:53 left in the game, guard Leticia Romero connected on a 3-pointer to pull the Seminoles within two for the first time since it was 2-0, but Miami did not allow another point. Senior guard Ivey Slaughter missed a pair of free throws with 4.9 seconds left and senior guard Jessica Thomas pulled down the last of her season- and team-high seven rebounds to clinch the game.

“We stayed on the gas pedal until the end there. I have to give credit to Florida State,” Meier said. “They made a lot of adjustments and then their kids made a couple really big shots . . . but I think we deserved to win it, so it went our way.”

Motley and Hayes co-led Miami with 12 points apiece on a combined 11-of-19 shooting (57.9 percent). Eight different Hurricanes tallied at least three points in the win, which was Miami’s first over a top-three seed in the ACC Tournament.

The Hurricanes, who moved to 20-0 when leading through three periods, finished the game with a 38-24 edge in points in the paint and an 18-8 advantage in bench scoring. This is the 25th time in 30 games Miami’s bench has outscored that of its opponent, including the 17th by double figures.

For Florida State, its 54 points marked the second-fewest it has scored all season, just shy of the 51 it had in a loss to Virginia in a game Thomas left early due to injury.

“There is just a real seriousness to us in terms of the scouting report,” Meier said of the Hurricanes’ defensive success. “I let the team know right after the Georgia Tech game, this scouting report is a help. You have to commit to it because these players are so great that we are playing against . . . The assistant coaches spend so much time getting us some aid, some assistance because you can’t shut people down.”

Miami will face third-seeded Duke, ranked No. 13/11, Saturday at 2:30 p.m., on ESPNU in the ACC Tournament semifinals.

·         Miami has now posted four wins over ranked teams this season, three of which have come away from home.

·         This is the Hurricanes’ second top-10 victory of the year and both have come outside the Watsco Center. Miami is one of 10 teams with multiple AP top-10 wins and one of just seven with two-plus away from home.

·         This is the first time Miami has reached the semifinals of the ACC Tournament in back-to-back seasons and the third time it has advance to the round overall.

·         Through two ACC Tournament games, the Hurricanes have trailed for a total of three seconds. This is the fifth time in 2016-17 Miami has won without trailing at any point, including the second time against an ACC opponent.