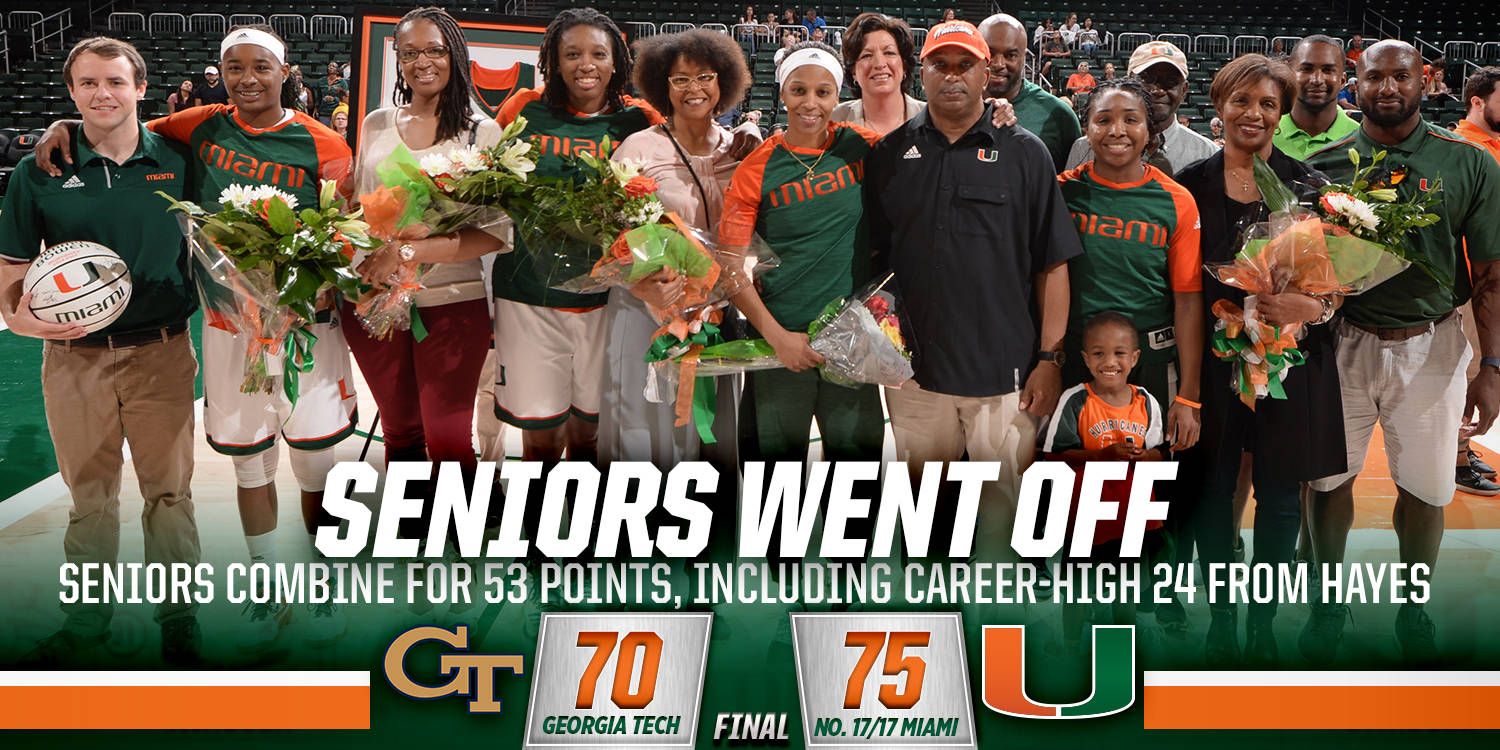 No. 17/17 Miami (21-7, 10-6 ACC) honored its four seniors, Nigia Greene, Keyona Hayes, Adrienne Motley and Jessica Thomas, before taking down the Yellow Jackets in a contest the Hurricanes led for nearly 33 minutes.

“It was senior day, but this was a hugely important game. It didn’t affect our standings at all, but it certainly affected us nationally,” Meier said. “Georgia Tech, playing against them, has prepared us for another kind of version of how someone else is going to try and beat us, with physicality and being monsters on the glass . . . They taught us some really good lessons and we’ll take them and try to be a better team in the postseason.”

Miami raced out to a 26-14 lead through one period of play, as its senior class combined for 21 points in the opening 10 minutes, including 10 from Motley.

Georgia Tech sliced the Hurricanes’ lead in half during the second quarter and Miami’s advantage was 40-34 at the intermission.

In the third quarter, the Yellow Jackets outscored Miami by a 21-13 margin to earn a narrow lead, 55-53, entering the final period of action.

Miami held Georgia Tech without a field goal for a span of six minutes and six seconds in the fourth frame. That included a stretch of four minutes and 21 seconds in which the Hurricanes did not allow a point.

“The execution in that fourth quarter is probably as proud as I’ve been of this team all year; the plays that we got, who got the touches, why we took them,” Meier said.

A 3-pointer by Motley with 1:35 on the clock put Miami up by nine points, 68-59. it was not until 15 seconds later that the Yellow Jackets ended their scoreless drought, but it was too little too late, as the Hurricanes reached double-digit conference victories for the fifth time in the past seven years.

For Hayes, the 24 points tied for the second-most by a Hurricane this season. It was the sixth 20-point outing of her career, including the second in 2016-17 and the fourth in ACC play. She shot 9-of-14 from the field, with both numbers matching season highs. Hayes also went 6-of-7 from the stripe, tying a season best in makes, and pulled down a team-high eight rebounds.

“When someone is on the ropes, Key Hayes is going to come through—and we were on the ropes,” Meier said. “She had a vision of what she wanted her senior day to be, and she went ahead and dictated it. She took the pen and she wrote her own story, and she has the talent to do that. It was a great moment for her.”

Along with Hayes, both Motley and Thomas finished with double-digit points, as the senior class combined for 53 points. Motley logged 17 to go along with a game-high three steals, tying her season best. Thomas added 12 points and a co-game-high six assists, tied for the fourth-most in her career.

“There was a great amount of pressure of them to sustain the level we had prior to their arrival,” Meier said of her four seniors. “They all came here because they wanted that, they knew we were an up-and-coming program. They saw how two or three players can make a huge difference in a program trajectory and they absolutely wanted to be those players. There is more pride in those seniors about Miami than people know. They were 17 years old already wanting that ‘U’ on their chest and making bold decisions to come here. I owe a lot to them.”

Junior forward Keyanna Harris played a career-high 28 minutes and sophomore forward/center Emese Hof notched a season-high-tying three blocks, equaling the most by a Hurricane in 2016-17.

The Hurricanes finished the game with a 15-5 edge in points off turnovers and had tallied six blocks, while Georgia Tech had zero.

With the regular season complete, Miami will be the seventh seed in the upcoming ACC Tournament. The Hurricanes will have a first-round bye and then face either No. 10 Georgia Tech or No. 15 Boston College Thursday at 6 p.m., in Conway, S.C.

·         With the victory, Miami has now taken the lead in the all-time series against Georgia Tech, 14-13. The Hurricanes have won seven of the past nine matchups.

·         Miami’s senior class has combined for 4,395 points as a group, with three of them passing the 1,000-point plateau. Hayes, Motley and Thomas are the second teammate trio in program history with quadruple digits at the same time.

·         Along with the four senior players, Jimmy Bowen, a team manager, was also recognized prior to the game.