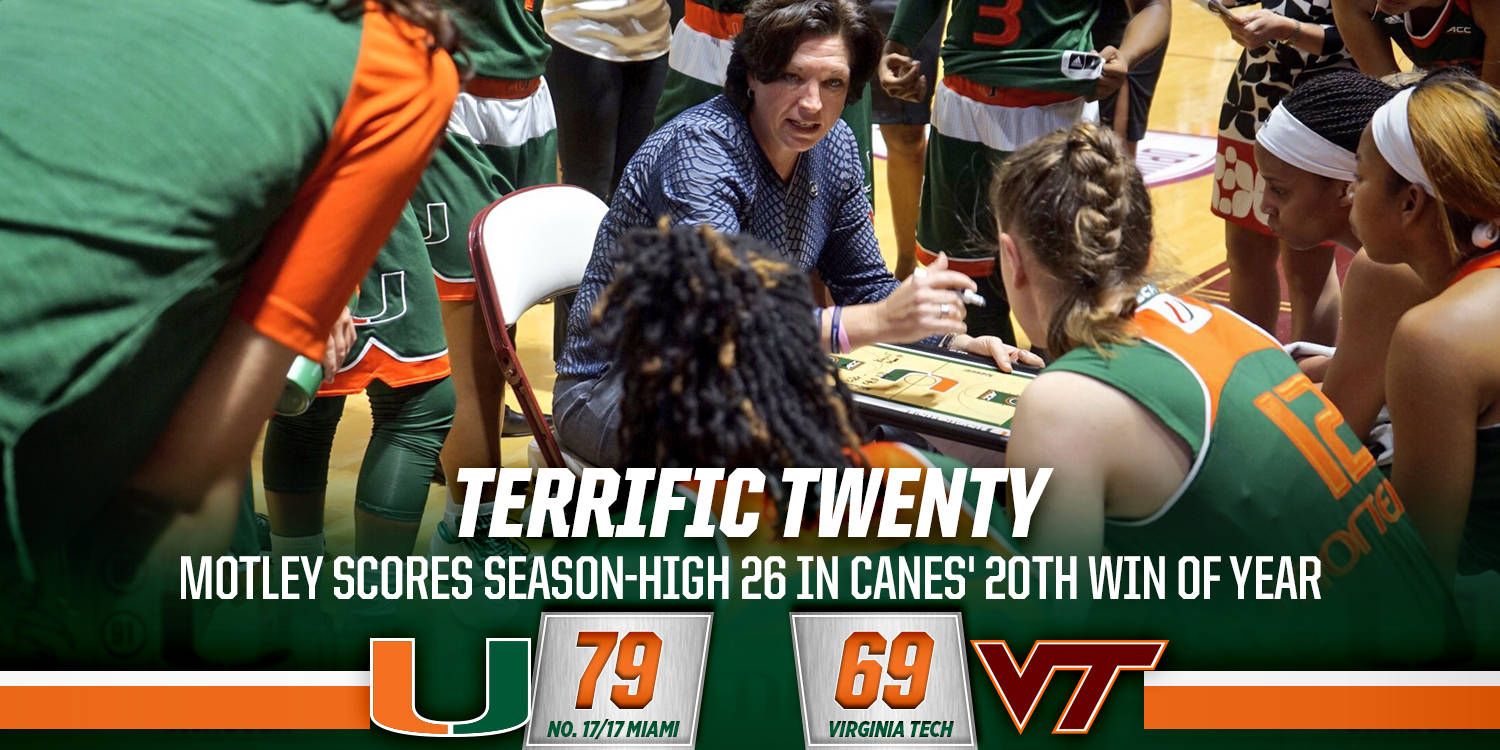 BLACKSBURG, Va. – The University of Miami women’s basketball team notched a 79-69 victory at Virginia Tech Thursday night in its final road game of the regular season.

Playing in her home state for the final time, senior guard Adrienne Motley led all scorers with a season-high 26 points to help No. 17/17 Miami (20-7, 9-6 ACC) reach 20 wins for the seventh time in eight years after doing so once in the prior 16 campaigns.

“Wow, we just did what it took, we weren’t perfect, we weren’t pretty, but when we needed big-time buckets we were just so locked in,” Miami head coach Katie Meier said. “We talked about details all week . . . and I thought that we really dialed in. When Emese [Hof] and Key [Hayes] play like that, we are tough to beat.”

After the Hokies stretched their lead to 10 early in the second session, Miami countered with a 13-3 run, including scoring seven points in a row, to pull even at 25 with 3:38 left on the clock.

Redshirt senior forward Keyona Hayes made a pair of free throws with 2:20 left in the period to give the Hurricanes their first lead since it was 2-0. The shots also moved her past Renee Taylor (2005-07) into the top 25 on Miami’s all-time scoring list, which she continued to climb during the game.

Hayes scored 12 points during a second period in which Miami outscored the Hokies by 16, 25-9, to take a 36-29 advantage into halftime.

In the third frame, Virginia Tech shot 8-of-9 at the free throw line and Miami went 3-of-10 from the stripe, helping the Hokies charge back in front. However, the Hurricanes responded and held a four-point edge, 53-49, entering the last quarter.

In the final period, Miami extended its advantage all the way to 11 on a 3-pointer by sophomore guard Laura Cornelius, helping put the game out of reach with 2:50 remaining. The Hurricanes would go on to record their sixth win in ACC play this season by double digits.

For Motley, this was the 25th 20-point outing of her career, including the fourth this season. It is the fourth time in her illustrious career she has notched 20 points in back-to-back games, as she set a season high for the second straight contest, following her 23-point outing Sunday at No. 13/14 Duke.

The Newport News, Va., native also surpassed her season high with seven rebounds, tied her career high with eight made free throws and set a career high with 11 free throw attempts. Motley, whose 26 points were the most by a Hurricane in 2016-17, also moved into second place on Miami’s career starts list and sixth on its scoring list.

“I could tell it was coming. She is just playing really light and very efficient,” Meier said of Motley’s recent success. “We had her on [Virginia Tech’s leading scorer Chanette] Hicks more then I wanted her to be. In the second half we had to put her on Hicks . . . so Motley was doing everything on the defensive end. I thought, ‘Man we are going to tire her out, we need her to hit a big shot,’ but she stayed gutty.”

For Virginia Tech, Hicks, a sophomore guard, led the way with 21 points, while senior guards Vanessa Panousis and Samantha Hill posted 17 and 10, respectively.

The Hurricanes outrebounded the Hokies by 15, tallying a season-best 57 boards, including 21 on the offensive end. Ten of the 11 Hurricanes who played logged multiple rebounds and three set or tied season bests in the rebounding column. Miami also had a 38-18 edge in points in the paint.

“They were without a very key player [as senior forward Sidney Cook got hurt] very early in the game. Then, [redshirt sophomore forward Regan] Magarity got into foul trouble,” Meier said. “We had to take advantage . . . We were not going to lose our purpose. We were absolutely going to do what we needed to do and trust Key and Emese. I thought we did a fantastic job.”

The Hurricanes, who clinched a winning record in ACC play for the fifth time in the past seven years, have now won 12 games in a row against Virginia Tech, extending their longest active streak against any ACC opponent. They now have an 18-6 edge in the all-time series with the Hokies.

Miami will wrap up regular season competition Sunday at 1 p.m., when it hosts Georgia Tech on senior day at the Watsco Center.

·         In the first half alone, Hayes was 6-of-9 at the free throw line, good for the second-most makes and attempts in a half by a Hurricane this season, including the most in the first half. The six makes matched her season high for a full game and the nine attempts surpassed her top mark of 2016-17 for a full game.

·         Cornelius eclipsed both 400 points and 150 rebounds as a Hurricane and junior forward Keyanna Harris surpassed 250 points in her career, as well as reached 50 made free throws.