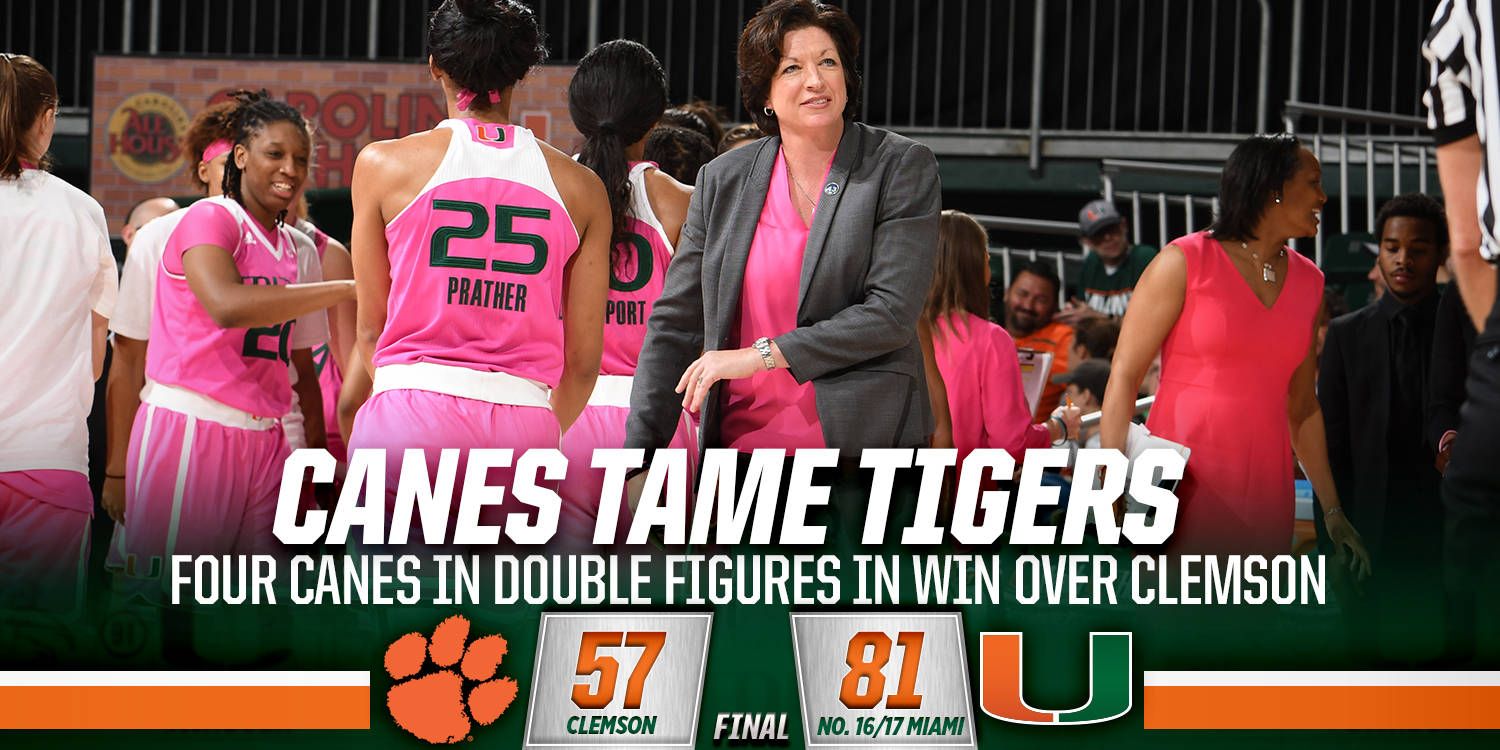 CORAL GABLES, Fla. – The University of Miami women’s basketball team rolled to an 81-57 victory over Clemson Sunday afternoon at the Watsco Center.

“I just tried to talk to my team in the locker room and I looked out at them and they are just such beautiful people and they are just so invested,” Miami head coach Katie Meier said on a day the team donned pink jerseys as a part of the Play4Kay initiative. “They have given so much. They are very humble and they are very appreciative of what the university has given them. I looked out at them to try to tell them I’m proud of them and I really couldn’t get through it because this is just a special group.”

The Hurricanes got off to a fast start offensively, racing out to a 25-13 lead on Clemson (14-12, 3-10 ACC) through one period of play. Sophomore guard Laura Cornelius capped the frame with a buzzer-beating 3-pointer.

Miami continued its offensive onslaught in the second period and built a lead of as many as 22 points, en route to a 48-30 advantage at halftime behind 18-of-31 (58.1 percent) shooting.

The Hurricanes’ first-half totals in points and field goal percentage both matched their best marks before the break this season.

The second basket of the third period, with 7:20 on the clock, was a 3-pointer by senior guard Adrienne Motley that moved her past Miami assistant coach Octavia Blue for seventh place on the Hurricanes’ all-time scoring list. With her 15 points in the game, Motley now has 1,729 in her career.

Miami’s offense remained strong throughout the third period and it conceded just four points during the frame, helping the lead balloon to 31, 65-34, entering the fourth quarter. The four points marked the lowest total Miami has allowed to an ACC opponent this season.

“Clemson never quits. So, we couldn’t even relax at halftime,” Meier said. “I thought the third quarter by [Thomas and Motley] was just perfect. We wanted to have some fun tonight, and had we not taken care of business in the third with our defensive effort, then we could not have fun and maybe everyone would not have played.”

The Tigers made nine shots in the fourth period, two fewer than their total from the first three sessions, to trim Miami’s margin of victory to 24. It marked the Hurricanes’ second-largest win in ACC play this season.

Along with Thomas and Motley, both Cornelius and junior forward/center Erykah Davenport recorded double-digit points. Cornelius posted 14, while Davenport had 10, her most in an ACC game this year. Davenport also notched a career-high-tying five steals, the fourth time in the last five games as Hurricane has had five steals, including the second time she has done so.

The Hurricanes had a 28-13 advantage in bench points, marking the 21st time in 25 games Miami’s bench has outscored that of its opponent, including the 14th time by double figures.

“The last couple of days we got the chance to talk about things that really matter,” Meier said. “We shared that we are really proud of this University for putting on an event like the Celebration of Women’s Athletics [held earlier in the day Sunday]. All of us have been touched by some sort of women’s cancer, so to have the pink night [was special]. We . . . had a really nice couple of days together just to really say that we love each other and that we are very proud to be on this stage. We knew there were people in the audience who wanted to see a fight and wanted to have some joy, and we hope we provided that. So, I was really, really happy.”

With the victory, the Hurricanes are guaranteed to finish at least .500 in ACC play for the seventh consecutive year after not doing so once in their first six seasons in the conference.

·         Sunday was the seventh time this season all 14 Hurricanes have played, including the fourth such time in ACC action.

·         Thomas reached 1,200 points in her career, becoming the 17th Hurricane to do so, and junior forward Khaila Prather reached 250 rebounds as a collegian.