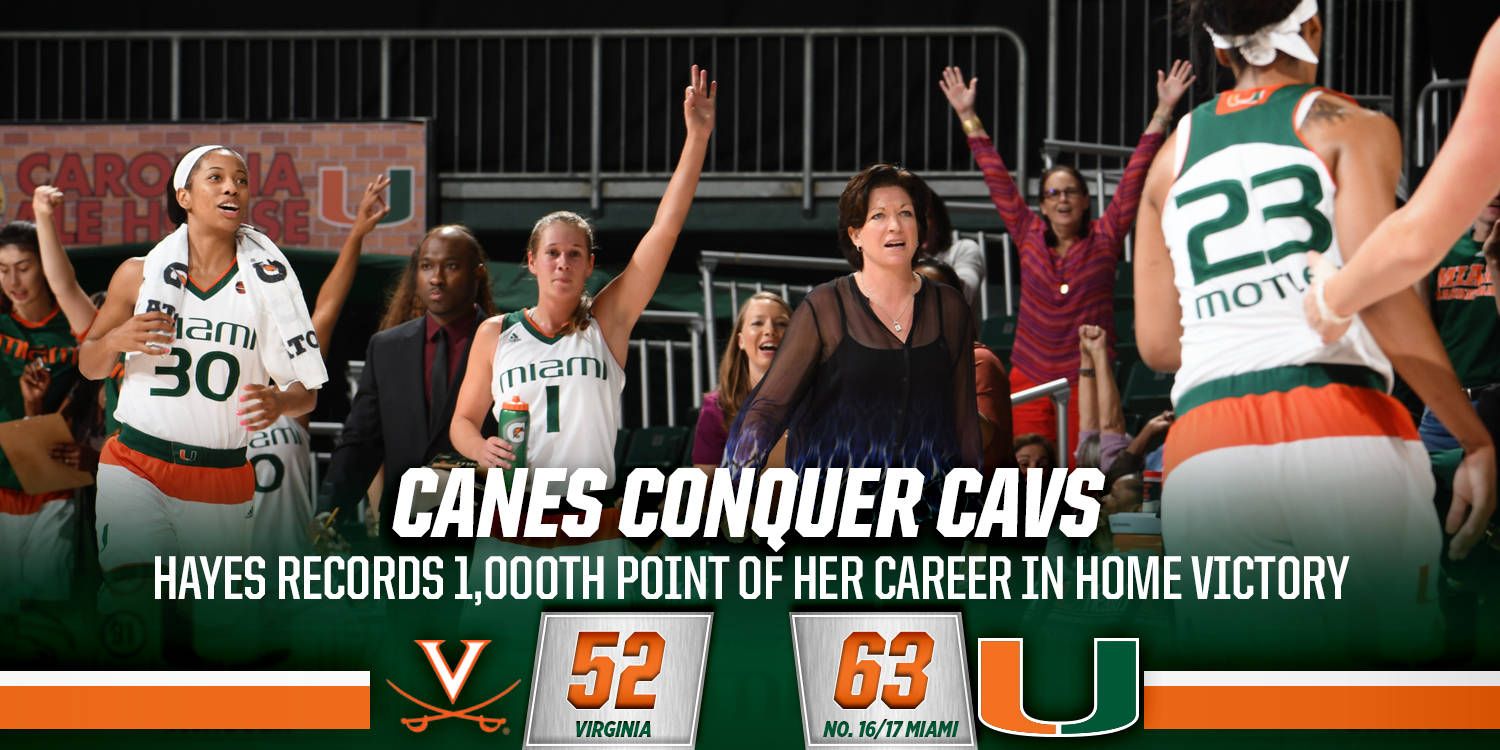 CORAL GABLES, Fla. – Redshirt senior forward Keyona Hayes stole the show for the University of Miami women’s basketball team in a 63-52 victory over Virginia Thursday night at the Watsco Center.

Hayes eclipsed 1,000 points and 700 rebounds as a collegian, finishing with 14 points to go along with a game- and season-high 13 rebounds, equaling her most boards in an ACC game. The 13th double-double of her career and fourth of the season pushed No. 16/17 Miami (18-6, 7-5 ACC) to victory in a game it never trailed.

“The last couple games she has just come around. She has had a really great attitude, she is working really hard,” Miami head coach Katie Meier. “She is so versatile. It makes the game a lot easier for me to call when she shows up and plays like that. Usually she scores a lot of points on nights that she is committed to the glass and that has been the case in the last two games . . . The 700 rebounds to me is way more impressive than the 1,000 points.”

Miami raced out to an early 8-0 lead, holding Virginia (15-9, 4-7 ACC) scoreless for the first three minutes and 54 seconds. A buzzer-beating 3-pointer by senior guard Adrienne Motley gave the Hurricanes a 21-12 edge through one period of play.

During the opening quarter, Hayes made a jump shot with 2:11 on the clock, providing her milestone moment. The Marietta, Ga., native is the 26th player in program history with 1,000 points and the 19th active ACC player in quadruple digits.

In the second frame, Miami held Virginia without a point for a span of five minutes and 33 seconds. The Hurricanes would go on to lead 26-18 heading into the locker room, marking the fourth time this season they have conceded fewer than 20 points in a half and tying for the fewest points allowed in an opening 20 minutes.

“We didn’t play well in the second quarter offensively, but that second quarter defensive lockdown was just beautiful,” Meier said. “We have some really smart schemes. We really took Virginia seriously because they really have some great scoring ability. So, I was pleased with that.”

After a back-and-forth third period that included an 8-0 run by Virginia countered by a 6-1 run by the Hurricanes to cap the frame, Miami’s edge stayed in double digits, 45-35, entering the final session.

Miami pushed its advantage to as many as 15 points in the fourth quarter. From there, Virginia was able to pull within seven, but could not get any closer, as the Hurricanes registered the 11-point win.

Along with her numerical milestones, Hayes also moved past Hope Butler (1984-88) for ninth place on Miami’s all-time rebounding list and matched her career high with three steals.

Motley finished with a co-game-high 15 points, giving her 1,714 in her career to pass Sylvia Wilson (1979-82) for eighth place on Miami’s all-time scoring list. Senior guard Jessica Thomas also recorded 15 points for the Hurricanes. Both players matched their season highs in rebounds, with six and five, respectively.

Hayes, Motley and Thomas now form the second trio in program history to have 1,000 points at the same time, joining Kym Hope, Jennifer Jordan and Cassaundra Wimes in 1998-99. The three also combined for 69.8 percent of the Hurricanes’ points in the win.

“There are certain games, where you know as a coach you know you need to win. We didn’t have time for anyone to make any kind of mental errors,” Meier said. “So, I just really relied on my veterans in the game. I don’t want anyone to lose confidence because of it, but my veterans were playing well so I rode them.”

Junior forward Keyanna Harris tallied a game-high and career-high-tying five steals, marking the second time in the last four games she has had five takeaways.

Up next for the Hurricanes will be a Sunday afternoon matchup against Clemson, with Miami hosting the Tigers at 2 p.m.

·         The Hurricanes limited the Cavaliers to six points in the second period, the third-fewest points they have given up in a quarter this season and the fewest in the second specifically.

·         Motley is now 12-2 in her career against teams from her home state of Virginia, including 10-1 versus the two ACC schools from the Old Dominion State.

·         In addition to Motley eclipsing 1,700 points and Hayes surpassing 1,000 points, Hayes also moved past 700 rebounds, sophomore guard Laura Cornelius eclipsed 50 steals as a collegian and Thomas surpassed both 400 made field goals and 200 made free throws.