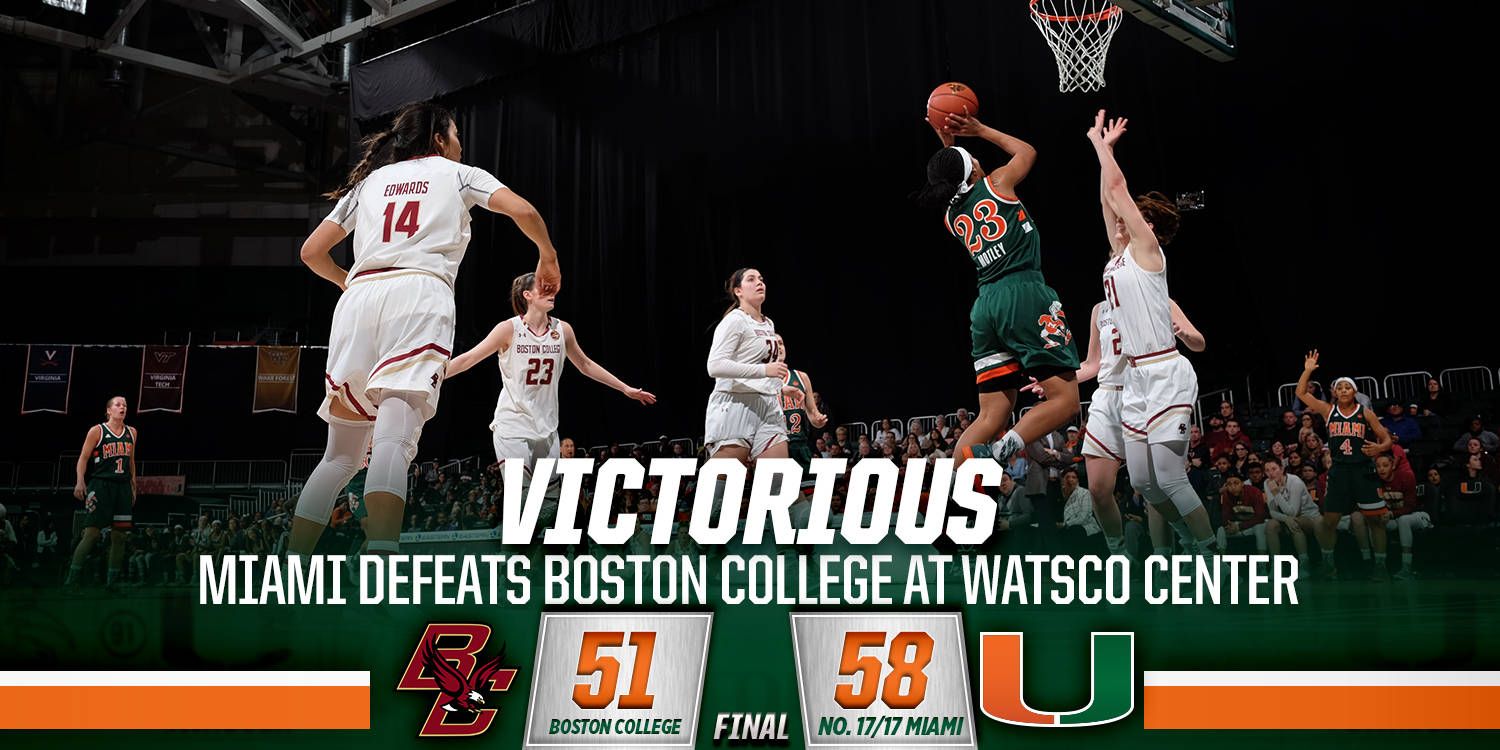 CORAL GABLES, Fla. – The University of Miami women’s basketball team tallied a season-best 19 steals and forced a season-high 34 turnovers in a 58-51 victory over Boston College Sunday afternoon at the Watsco Center.

Sophomore guard Laura Cornelius and senior guard Jessica Thomas had 15 points apiece to lead No. 17/17 Miami (16-5, 5-4 ACC) and the Eagles had seven more turnovers than they had in any prior game this season.

“We got more than 10 steals off our bench . . .  They came off the bench and they got a good look at what the plays were,” Miami head coach Katie Meier said. “They were some high-level scheme steals; they weren’t just off pressuring the ball, they weren’t just out of our press. There were a lot of half-court steals and that was a lot [from our] scout and I do like that about this team. If we are not hitting on the offensive end, we can turn to another way to win.”

The Hurricanes picked up their offensive play in the second period, closing it on a 14-2 run over the last five minutes and 14 seconds to take a 32-18 advantage into the locker room.

With nine points allowed in both the first and second periods, it marked the third time this season Miami has conceded single-digit points in multiple quarters of a game, along with contests against FIU and Coppin State. Additionally, it was the third time this season the Hurricanes have given up fewer than 20 points in a half, including the first time in the opening half.

Miami held the Eagles scoreless for a span of five minutes and 41 seconds during the third frame. However, Boston College managed to slightly chip away at the Hurricanes’ lead with a strong opening and close to the period. Miami led by 10 points, 44-34, entering the final session.

The Eagles used a 13-3 run, including scoring nine points in a row, during the fourth period to take a 49-48 lead with 3:26 left on the clock. From there, the Hurricanes closed the game on a 10-2 run, with Thomas scoring six consecutive points, to come away with the victory.

“We started talking all of sudden. That kind of woke us up,” Meier said of the team’s response after falling behind. “They came to the huddle and started talking and solving and [they were] engaged. Even the bench was giving ideas.”

Redshirt senior forward Keyona Hayes finished with 10 points, including the last four of the contest, and a game-high eight rebounds.

Junior forward/center Erykah Davenport and junior forward Keyanna Harris each logged five steals, becoming the first Hurricanes with five in a game since Davenport did so Dec. 4, 2016 against Old Dominion.

Boston College sophomore center Mariella Fasoula led all players with 21 points, while no other Eagle scored in double figures. The Eagles’ 27 turnovers in the first three periods of play matched their most in a full game this season.

Miami gave up just two fast break points and had a 15-9 edge in bench points, marking the 18th time in 21 games the Hurricanes had the advantage in bench scoring.

Up next for the Hurricanes will be a trip to Winston-Salem, N.C., where they will face Wake Forest Thursday at 7 p.m.

·         Hosting many former players for an alumni day, the Hurricanes wore green throwback jerseys from the era during which assistant coach Octavia Blue played at Miami.

·         The last time Miami conceded single-digit points in multiple periods of a game against an ACC opponent was 2/7/16 versus Duke. That was also the last time the Hurricanes allowed fewer than 20 points in a half in ACC play.