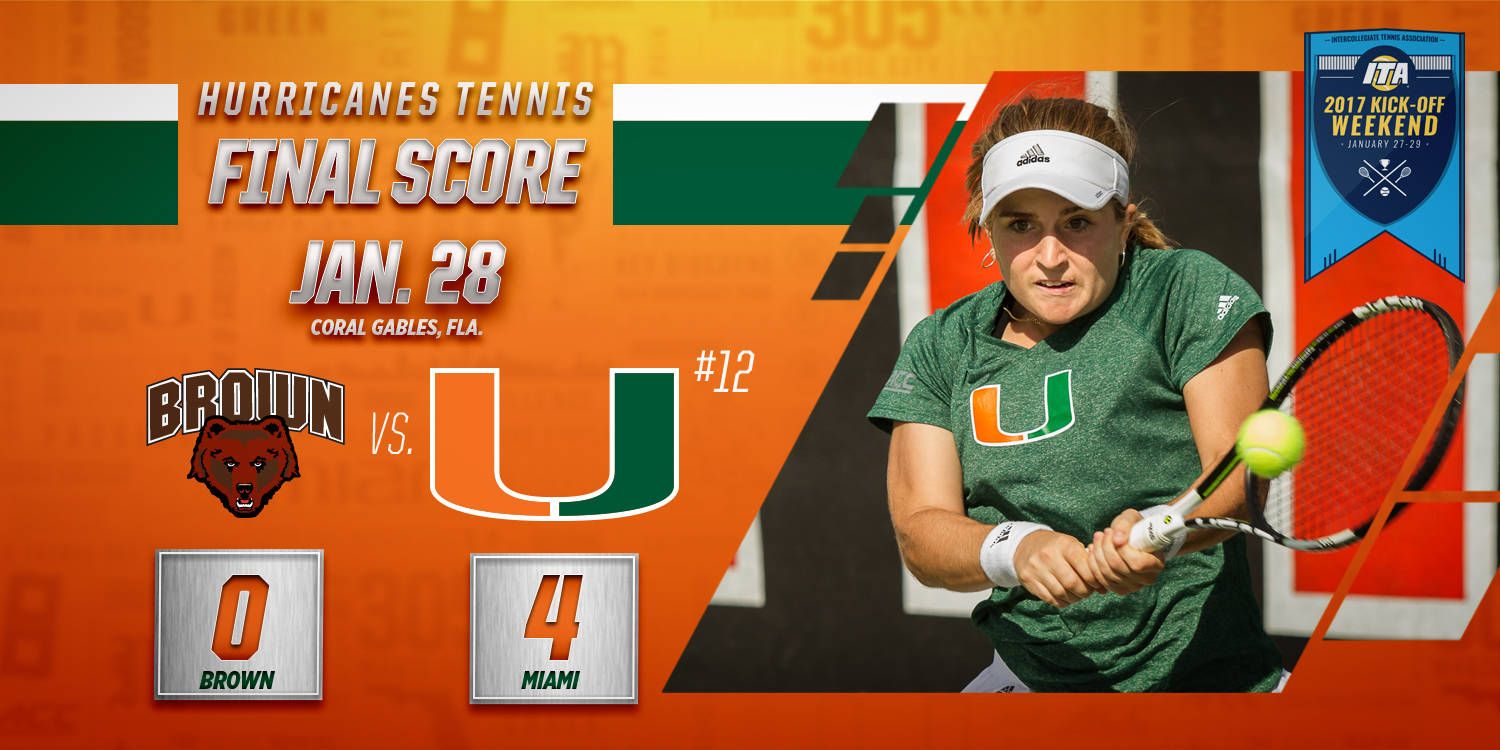 No. 12 Miami (1-0), the top seed in the field, narrowly earned the doubles point in the season’s first dual match and then rolled in singles play against the fourth-seeded Bears.

“It was fun to see them competing as a team, for sure. When the dual season starts, it’s always fun,” Miami head coach Paige Yaroshuk-Tews said. “[There is a] little more energy, a little different vibe around the courts. So, it was fun. I think we’ve got to play a little bit better deeper into points tomorrow. We’ve got to get off to a quick start in doubles, but all in all, I thought it was a solid performance.”

Doubles competition was tight on all three courts, with two going to a tiebreaker. Miami got on the board first with junior Sinead Lohan and sophomore Ana Madcur coming back from a 1-4 deficit to top Mariska Chamdani and Maddie Stearns, 7-5.

Brown (1-1) leveled the score with the narrowest of wins, 7-6 (7-5), by No. 45 Alyza Benotto and Dayna Lord over redshirt senior Maci Epstein, in her first spring action as a Hurricane, and freshman Dominika Paterova.

Junior Silvia Fuentes and freshman Estela Perez-Somarriba had their 5-2 lead turn into a 5-6 deficit, but then stormed back to take down Devon Jack and Juliana Simon, 7-6 (7-2), and give the Hurricanes the doubles point.

“We just started playing the patterns we needed to play at two [with Lohan and Madcur]. Once we were able to find the patterns at two, we were in a good spot,” Yaroshuk-Tews said. “Three had a little bit of a hiccup. [Fuentes and Perez-Somarriba] had a little bit of a letup once they got up; they weren’t as disciplined as they should have been. When you’re playing a set of tennis with no-ad scoring, you’re going to have a lot of tight matches.”

Miami had little trouble with the Bears in singles action, cruising to a trio of quick victories to seal the match.

Sixth-ranked Lohan earned the first point by posting a 6-2, 6-2 triumph over Lord and sophomore Clara Tanielian followed soon after with a dominant 6-0, 6-1 win against Taylor Cosme.

No. 70 Perez-Somarriba, in the first dual match of her career, clinched the victory for the Hurricanes by topping Stearns, 6-1, 6-4.

“Domi started off a little slow in singles, got it together in the second set,” Yaroshuk-Tews said. “Estela played incredible as a freshman. She’s just very efficient and thorough.”

For Yaroshuk-Tews, this was the 200th home match of her illustrious career and she is now 187-13 in those outings, good for a staggering .935 winning percentage. Additionally, this was the 130th shutout win—regardless of location—in Yaroshuk-Tews’ 16-year tenure, including the 73rd since 2009.

Miami will face No. 22 Texas A&M Sunday at 1 p.m., with a berth in the ITA National Indoor Championship on the line. Brown will play South Alabama at 10 a.m., in a consolation affair.