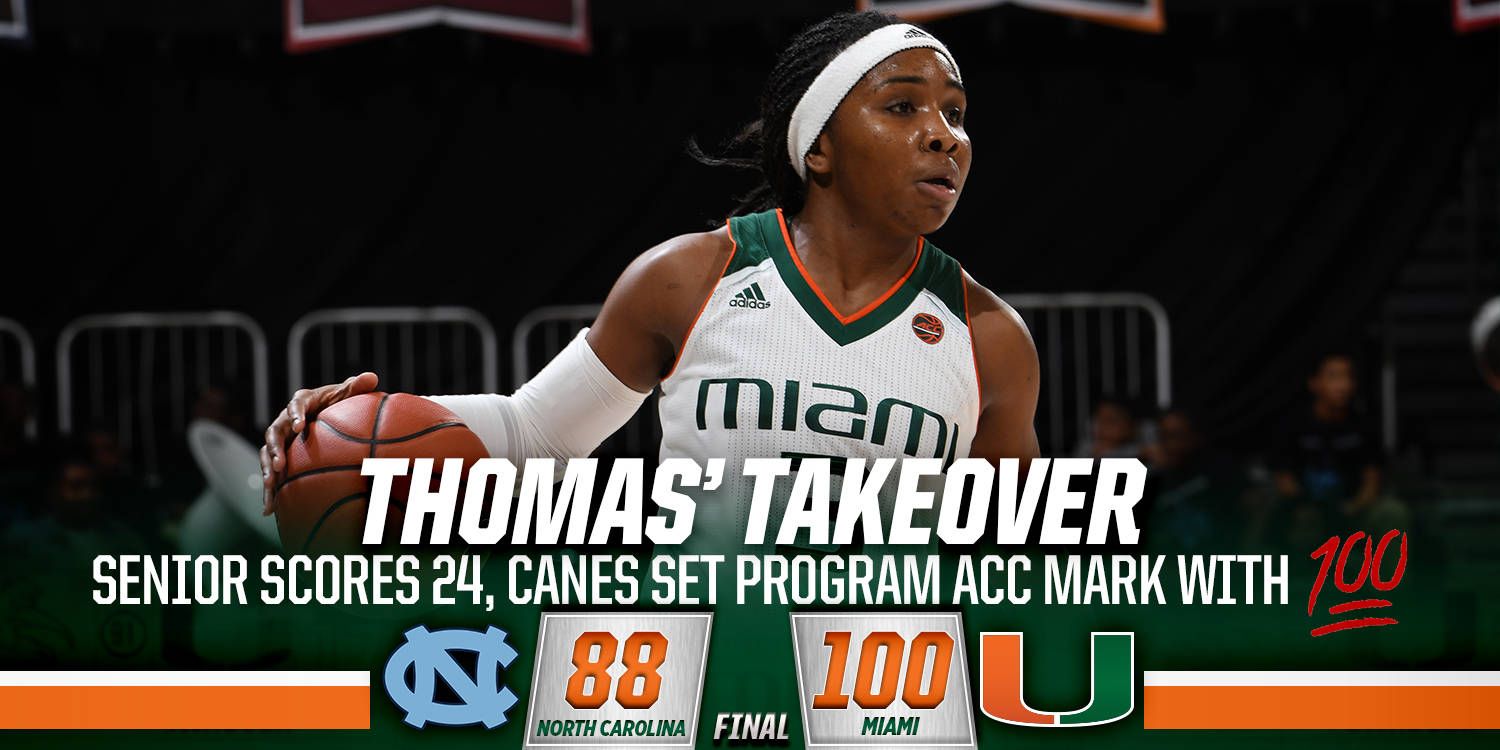 Senior guard Jessica Thomas tied her career highs in both points (24) and assists (seven) to help No. 17/17 Miami (15-5, 4-4 ACC) score its most points in a game this season and set a new program record for points in an ACC contest. The 100 points are also the most by any ACC team in a conference game in 2016-17.

“We scored 100 points and we did not have Adrienne [Motley] and our two post starters did not score double figures,” Miami head coach Katie Meier said. “That is really impressive if you think about it. One of our top point scorers wasn’t here and two others didn’t even hit double figures. That’s the story—depth.”

Making the first start of her Miami career, in place of senior guard Adrienne Motley, who was unavailable due to a family matter, redshirt junior guard/forward Shaneese Bailey scored the Hurricanes’ first nine points, matching her season high for a total game.

Miami closed the second period on a 10-3 run over the final two minutes and 23 seconds and sophomore guard Laura Cornelius‘ runner at the buzzer evened the score at 44 entering the break. It marked the first time the Hurricanes have been tied at halftime this season.

Thomas went on a personal 11-2 run in the third quarter, including scoring nine straight points, to help Miami take a 61-50 edge with 4:09 left in the session.

The Hurricanes made eight of their final 10 field goals of the third period and posted 31 points—14 of them by Thomas—in the frame, their most in a single quarter all season. Through 30 minutes of action, Miami held a 75-61 advantage.

Miami stretched its lead to as many as 17 points in the final frame before earning the 12-point decision.

Miami’s 100 points were also the most scored by an ACC team in conference play so far this season.

Thomas scored 20 of her 24 points in the second half, setting a new season high by a Hurricane for points in a half and matching the most in a game by a Miami player in 2016-17. It is the sixth time Thomas, who went 7-of-7 at the free throw line, has scored 20-plus points in her career, including the third time this season.

“That second half, Jessica Thomas, I don’t think she has played better ever,” Meier said. “Think about this—she tied her career high in points and assists on the same night. That is a heck of a performance. She was missing her buddy, [Motley], and I know she regrouped at halftime.”

Sophomore guard Laura Cornelius logged 19 points in the win, shooting 5-of-8 from 3-point range, marking the fifth time in her career she has made at least five threes in a game. She also tied her season high with six rebounds.

Bailey finished with 17 points, matching her total from the last 12 games combined and eclipsing her prior season high by eight.

“We knew we needed her so bad, and she had been putting in the work and she had been putting in the time,” Meier said. “However yesterday in practice, she was ill . . . She bounced back today and we had her as a game-time decision. For her to have that performance—[it was] not quite Michael Jordan when he had the flu, but that was ridiculous because it was all effort plays.”

Junior forward Keyanna Harris had double-digit points for the fourth time as a collegian, also notching 17 points to surpass her previous career best by six.

“I just thought Key Hayes, Harris and [junior forward/center] Erykah Davenport, the amount of effort they put in, just being themselves, playing their role, getting after the ball [was great]. Then you throw Bailey into the mix.” Meier said. “How aggressive we were, how quick to the ball, bursting to the ball, catching things, we had not been doing that, so I thought that physical play really separated us tonight.”

In addition, the Hurricanes’ bench outscored that of North Carolina, 24-5, marking the 17th time in 20 games they have had the edge in bench points, including the 12th time by a double-digit margin.

The Hurricanes return to action Sunday at 1 p.m., when they take on Boston College at the Watsco Center.

·         This was the first game Motley has not played in since stepping foot on campus, snapping a streak of 116 consecutive games played, as well as 105 straight starts.