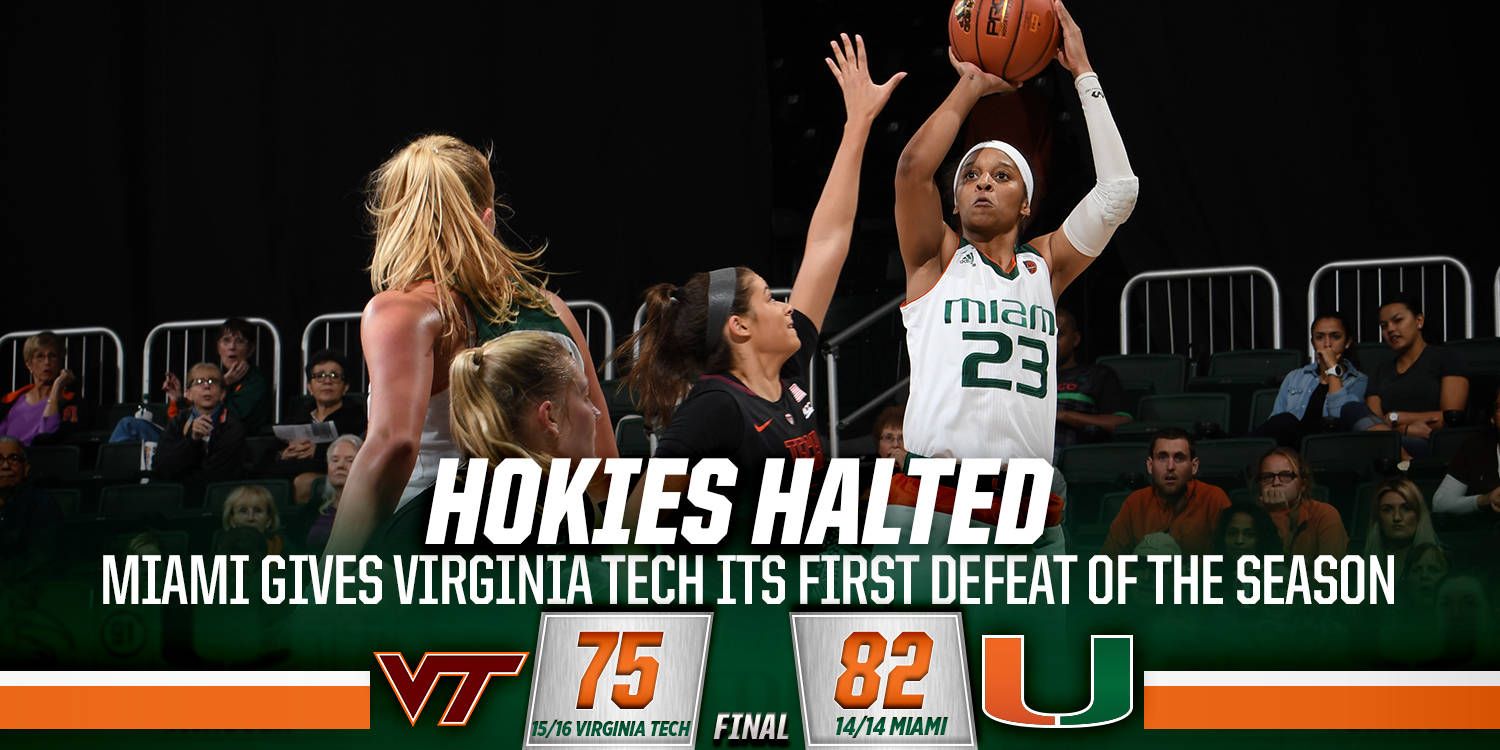 CORAL GABLES, Fla. – Three teams in Division I entered Thursday night without a loss. Following the University of Miami women’s basketball team’s 82-75 victory over No. 15/16 Virginia Tech at the Watsco Center, that number is down to two.

Senior guard Adrienne Motley led a quintet of Hurricanes with double-digit points, as No. 14/14 Miami (14-3, 3-2 ACC) registered its third top-25 triumph of the season.

“Well, we are a top 25 team too, so that is the air we want to be in,” Miami head coach Katie Meier said. “I mentioned to the kids that we have been in the rare air. There is a reason why people can’t make it to the top of Mount Everest; the air gets really thin . . . That is one of the games that if we didn’t have this tough schedule, I don’t know if we pull it off.”

Miami scored the first three points of the second quarter to extend its run to 10-0 and take a 20-18 advantage. The Hurricanes would go on to hold the Hokies to one point, and without a field goal, for a span of six minutes and three seconds.

Entering halftime, Miami held a narrow 36-35 lead, helped by 5-of-10 shooting from 3-point range compared the Hokies’ 2-of-9 mark.

After a back-and-forth third period, Virginia Tech senior guard Samantha Hill made a buzzer-beating midrange jump shot to give the Hokies a 58-57 advantage headed into the last quarter of play.

Miami used a 15-5 run, including scoring seven straight points to begin it, in the fourth period to take its then-largest edge of the game, 74-65, with exactly three minutes remaining. The Hurricanes led by as much as 10 down the stretch and shot 8-of-10 at the free throw line in the closing three minutes.

“Jessica Thomas,” Meier said of what clicked for the Hurricanes during their strong close to the game. “I just thought she was every level of a point guard. Sharing the ball, diming it, hitting big shots and making hesitation drives. That really had them on their heels. So, she was fantastic.”

In addition to Motley’s team-high 18 points, Thomas, a fellow senior guard and co-captain, finished with 17 and six assists, the latter her second-most of the season.

Off the bench, sophomore forward/center Emese Hof had season highs in points (14) and rebounds (seven), while sophomore guard Laura Cornelius had 13 points and season-high-tying six rebounds and freshman guard/forward Sarah Mortensen added 10, the second-most points of her career.

Thursday was the first time since Dec. 20, 2015 against Indiana that five Hurricanes finished in double figures and the first time five did so in ACC play since Feb. 9, 2014 versus Georgia Tech.

“They were dialed in, very focused. There were a lot of nuances and themes that we wanted to use,” Meier said of how five Hurricanes finished with double-digit points. “When we wanted to go to the theme and score inside, I did not have to call the exact play. I just said, ‘We need to score inside now, call the play.’ They found the theme. . . So, it was fun for me since I was just coaching concepts and the players were making plays.”

Hill paced all scorers with a career-high 23 points for the Hokies. Sophomore guard Chanette Hicks added 19 and redshirt sophomore forward Regan Magarity logged a double-double with 18 points and a game-high 14 rebounds.

The Hurricanes had a 39-2 edge over Virginia Tech in bench scoring, tying for their largest margin of the season in that category. Miami’s bench has outscored that of its opponent 15 times in 17 games and posted a margin of at least plus-28 four times.

Miami will now travel to Louisville, Ky., where it will play Sunday at 1:30 p.m., on ESPN2 versus No. 9/8 Louisville in its third consecutive game against a top-15 team.

·         The last time Miami defeated at least three top-25 opponents in a season was the 2011-12 campaign when it topped No. 11/12 Rutgers, fifth-ranked Maryland and No. 22/RV North Carolina at home and won at eighth-ranked Maryland. Previously this year, the Hurricanes have posted road wins at No. 9/10 Ohio State and RV/No. 23 NC State.

·         The Hurricanes are now 17-6 all-time against Virginia Tech and have won 11 consecutive meetings against the Hokies, good for their second-longest active streak against any opponent, trailing only 17 versus Florida Atlantic.

·         Virginia Tech entered the game averaging 13.0 assists per game and Miami limited it to just seven on the night.

·         Motley is now 11-2 in her career against teams from her home state of Virginia, including 9-1 versus the ACC’s two Old Dominion State schools. She is 6-0 against Virginia Tech and is averaging 16.0 points per game.