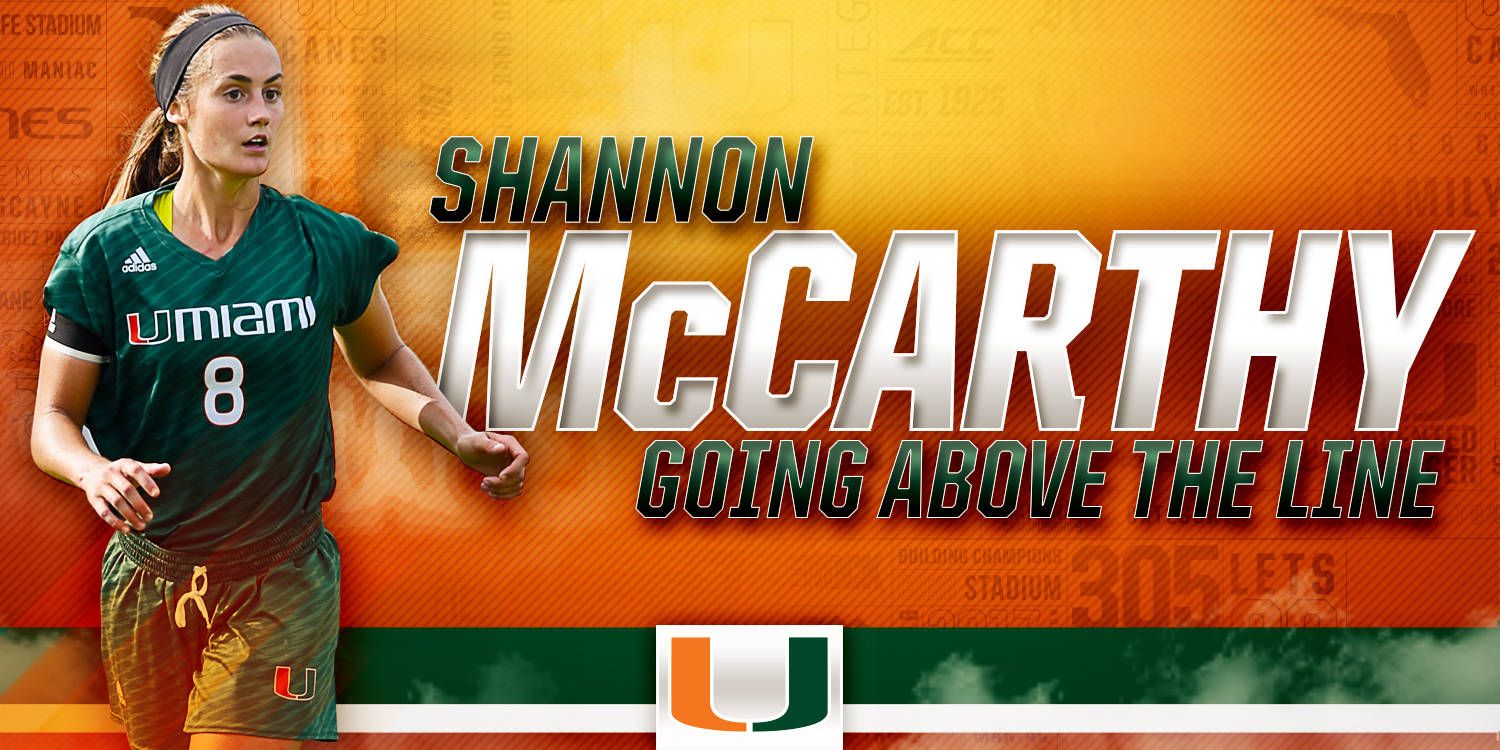 Shannon McCarthy: Going Above the Line

CORAL GABLES, Fla. – Shannon McCarthy graduated high school early to enroll at the University of Miami. The star defender had the opportunity to work with the women’s soccer team and slowly adapt to college athletics before taking the field her freshman year.

As a young athlete, she was already making an impact at the University of Miami. Playing in 16 of the 20 matches as a freshman, including earning three starts, she began to see more action as the season progressed.

Her place on the women’s soccer team has never been questioned and she has always played a vital role in the team’s success.

“She impacts everyone around her,” teammate and close friend Ainsly Wolfinbarger said. “Whether it is on the field, the classroom or with SAAC [Student-Athlete Advisory Committee] events when we do community service, she just has a presence about her.”

However, after she enrolled early and completed her first season Shannon’s world took a turn: She had to undergo surgery to remove a rib in May of 2012.

McCarthy’s surgery was successful, but later a blood clot that she unknowingly lived with for eight months moved into her left arm. She was diagnosed with Thoracic Outlet Syndrome, a group of disorders that occur when blood vessels or nerves in the space between your collarbone and first rib are compressed.

“This was huge because I had never had an injury before and this just came on and it wasn’t a hit that you can see on the field or anything,” McCarthy said.

The nightmare did not stop there; McCarthy began to feel the symptoms of a second blood clot soon after. She was instantly put on blood thinners which she had to inject into her stomach every twelve hours for six months, keeping her off the field for all but three matches her sophomore year.

“It was definitely a roller coaster,” she said. “It went from everything going well to, ‘Oh my gosh, what is happening to me now?’”

But this hiccup in her life did not change her morale or attitude toward soccer. McCarthy said she owes her identity as a player and as a leader to that first season. She found a way to make her redshirt experience a valuable one, not only to herself, but also for her teammates who look up to her.

“She is definitely my big sister,” Wolfinbarger said. “She made me feel like family. She has been a really key factor in helping me get through the season.”

As a young athlete it is sometimes difficult to keep faith religiously and in yourself. For McCarthy, her injury gave her a reason to tap into her faith with the help of Athletes in Action, an on-campus Christian ministry. Through Athletes in Action hope, faith, and her confidence were restored.

“They just gave me this sense of peace and joy through my faith that I hadn’t been tapping into as a young, naïve, immature student-athlete, who completely idolizes my sport,” McCarthy said.

During the process, she met her biggest supporters and mentors, campus ministry chaplains Steve and Arlene DeBardelaben, and they drove her to answer her call into leadership at a tough time for her.

“They have helped me grow in ways that some might find intimidating,” McCarthy said. “They truly just helped me reach my full potentially spiritually, on and off the field.”

Her faith helped her when she was forced to mature quickly, taking on a leadership position at the age of 19. Leading through this growth was challenging for McCarthy, but she says it was worth it because of the success they achieved this fall.

During that time, her teammates developed respect for her. She made herself vulnerable to them and used her ability to raise the bar and push her teammates to the next level.

Head coach Mary-Frances Monroe delegated a leadership position to McCarthy after she sat out her sophomore year. Leading through this growth was challenging but so worth it in the end because of the closeness our team had this fall.

“Shannon is a wonderful leader. She is very vocal and learned how to do things at a young age that are sometimes difficult to do,” Monroe said. “She has very high standards for not only herself but her team and she is constantly pushing the people around her to work harder.”

Though she was thrown straight into the position, following a year on the sidelines,McCarthy became one of the most effective leaders on the women’s soccer team. In 2016, she helped take her team, picked to finish last in the Atlantic Coast Conference, all the way to the ACC Championship as the seventh seed. However, Miami came up just short of a spot in the NCAA Championship.

“Shannon, along with the other seniors, are the reason we got to where we did this year,” Wolfinbarger said. “We have the mentality that we will make it next year; we are going to go get it for Shannon.”

In addition to McCarthy’s grit, energy and perseverance, her teammates call her the “extra session queen” because she has been known to go above the line, working after hours on her craft in order to perfect it.

“Our whole thing is above the line and that really is all Shannon,” Wolfinbarger said of one of the team’s mottos. “She gets there and then some it’s always more and that type of mentality is what helped our team be successful this year.”

Still, McCarthy said her experiences as a college athlete enriched her experience more than she ever expected. Off the field she has been involved with the Student-Athlete Advisory Committee, even serving as a member of the ACC SAAC Executive Board, as well as Athletes in Action. McCarthy has dedicated her spare time to giving back in any way she could.

McCarthy’s future is on the soccer field.She hopes to have the opportunity to play soccer professionally, and that soccer will be the vehicle that takes her abroad, to those unexplored places. In addition to fulfilling her goal as a professional athlete, she has a heart for the soccer community and wants to include the Athletes in Action community, coaching and community service in her future.

“I feel very compelled to give back to the game because of what a great experience I have had, so I would love to coach at the college level and get involved in Athletes in Action,” McCarthy said. “That is the dream.”