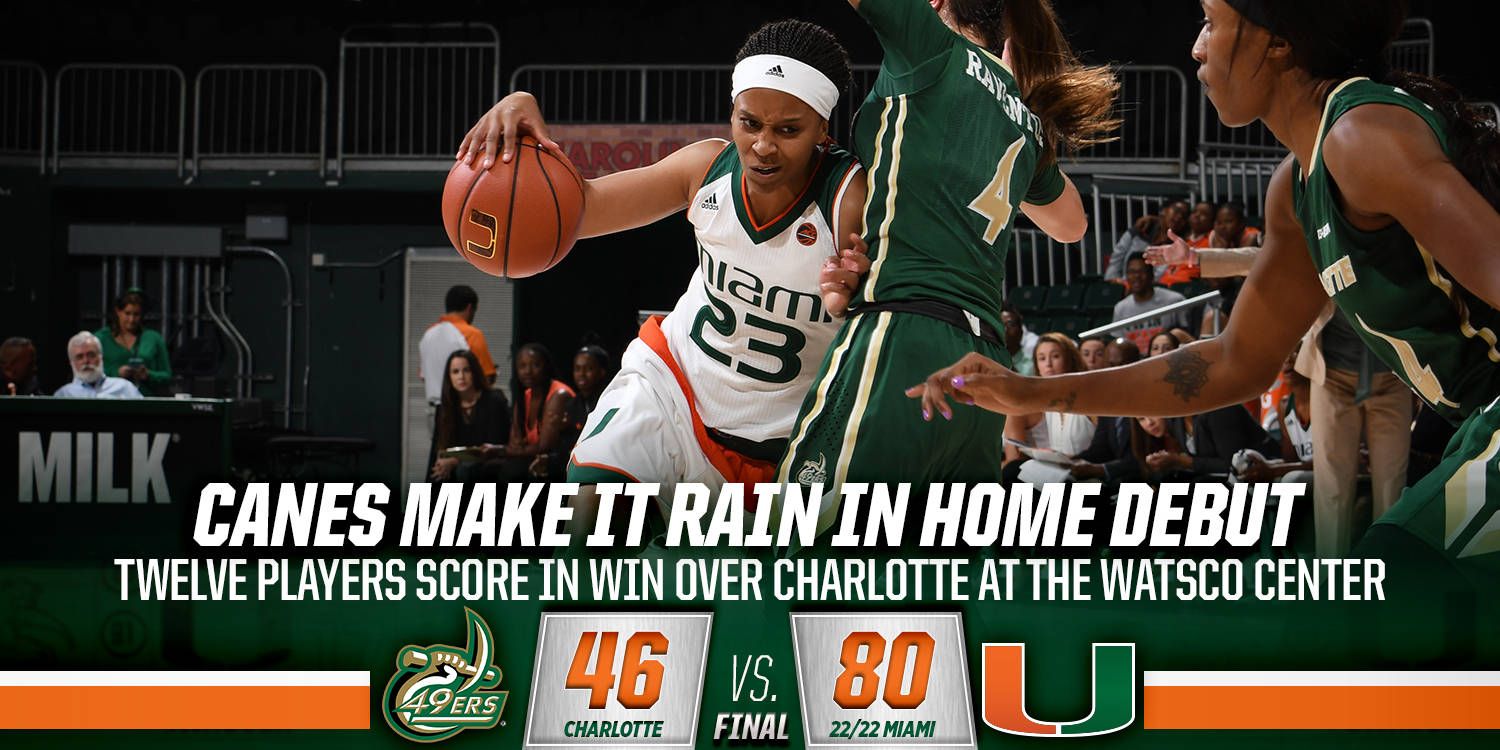 @CanesWBB Cruises to 80-46 Victory over Charlotte

CORAL GABLES, Fla. – The University of Miami women’s basketball team turned in an impressive 80-46 win over Charlotte in its 2016-17 home opener Wednesday night at the Watsco Center.

Senior guard Jessica Thomas led all players in points and assists, notching 18 and five, respectively, to help No. 22/22 Miami (2-1) dominant from start to finish in a game during which it never trailed.

“I specifically told the Charlotte coaches after the game—they had beaten Wisconsin—they have a nice squad,” Miami head coach Katie Meier said. “I just don’t think we could have played any better in the first half and I didn’t want them to feel like they did something wrong. It was just all cylinders clicking, the kids were excited to play at home, fix some things that we had to fix from our last road trip [and they had] just surreal energy.”

Miami opened the game by connecting on its first four shots, all from beyond the 3-point line, to take a 12-0 lead after just two minutes and 11 seconds of play. Senior guard Adrienne Motley and sophomore guard Laura Cornelius each hit two of the long range shots.

The Hurricanes would go on to make their first eight field goal attempts—five of them 3-pointers—en route to taking a 30-10 lead after one period. Miami connected on six 3-pointers in the first 10 minutes.

Miami continued its strong play in the second frame and led by 27 points, 47-20, at the break. Motley (11) and Thomas (10) combined for 21 points on their own, while junior forward Keyanna Harris‘ six rebounds in the opening half surpassed her prior high for a full game.

In the third period, the Hurricanes extended their lead even further, as they continued their hot shooting and suffocating defense. Miami held a 67-33 edge entering the final session.

The Hurricanes pushed their advantage to as many as 38 points in the fourth quarter before winning by a 34-point margin, 80-46.

Along with Thomas, who shot 7-of-9 from the field, Motley and junior forward/center Erykah Davenport also scored double-digit points.

Motley posted 12, while Davenport had 11 points, went 5-of-5 from the field, added a game-high four steals and logged multiple assists for the fourth time in her career. The Decatur, Ga., native has now scored 10-plus points in the first three games of the season after never doing so in three straight games previously as a collegian.

“I think Erykah is just playing some really great basketball,” Meier said. “. . .  She’s so efficient, perfect from the field [tonight and overall is] shooting at a very high percentage.”

Harris finished the game with a game- and career-high nine rebounds in a career-best 27 minutes of action. Her three assists were one off her career high.

No Charlotte player scored in double figures in the contest, as redshirt junior forward Nyilah Jamison-Myers and junior guard Amaya Ransom co-led the 49ers in scoring with eight points each. Miami limited reigning Lefty Webster, a Preseason All-Conference Team selection, to seven points on 2-of-11 shooting.

Additionally, the Hurricanes had a 21-11 edge in assists and doubled Charlotte on points in the paint, 36-18.

Miami will now hit the road once again, as it takes on St. John’s in Queens, N.Y., Sunday at 7 p.m., for its fourth consecutive game against a team that made the postseason in 2015-16.

·         Twelve different players scored in the victory for the Hurricanes, who had just 11 active players last season.

·         Freshman guard/forward Sarah Mortensen scored the first points of her collegiate career on a layup with one minute and 45 seconds left.