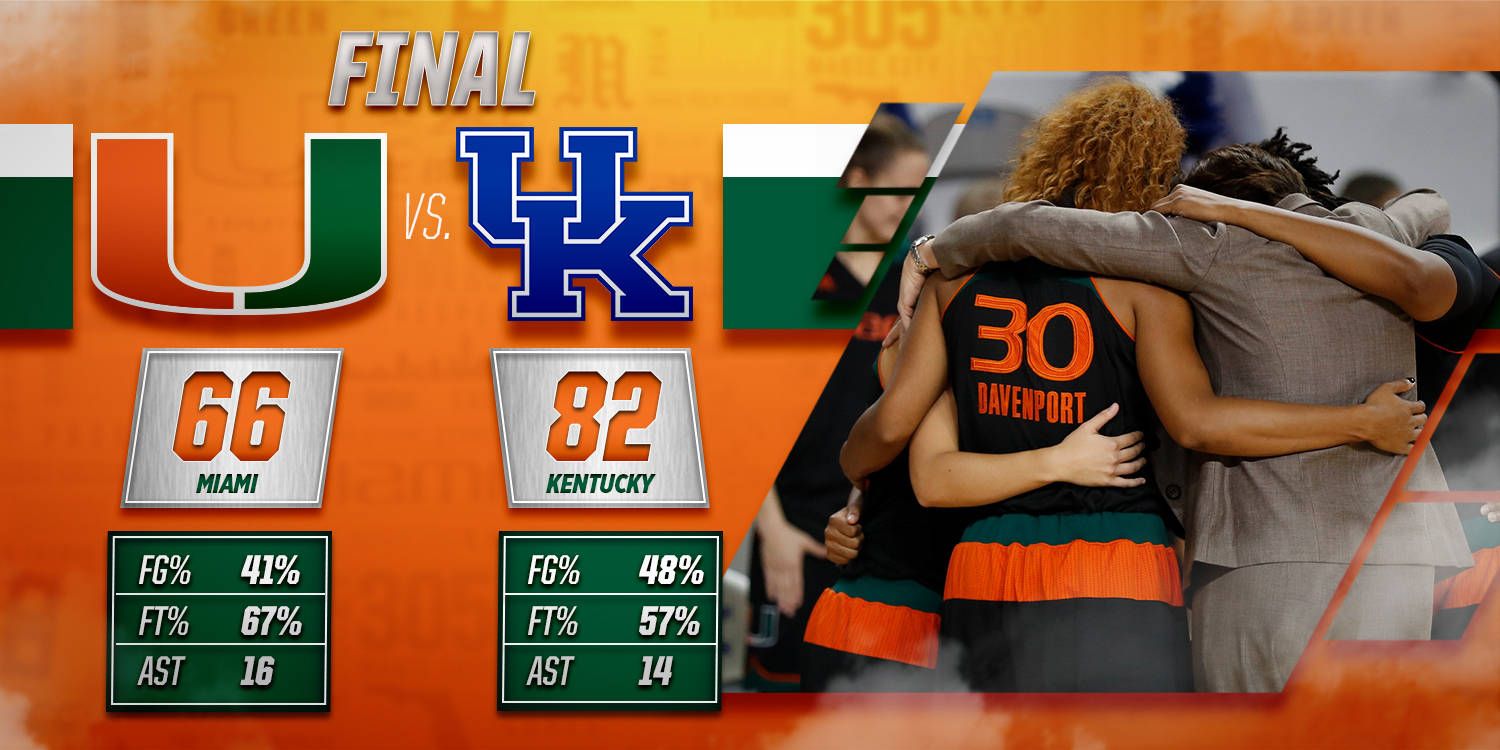 @CanesWBB Drops Opener at No. 19 Kentucky

LEXINGTON, Ky. – In the nation’s only top-25 matchup on the opening night of the season, the University of Miami women’s basketball team fell to No. 19 Kentucky, 82-66, Friday at Memorial Coliseum.

“I am disappointed, obviously, with the outcome of the end of the game, but other than that it went pretty much as I expected it would,” Miami head coach Katie Meier said. “I have so much respect, admiration and actually just a really good feeling about Kentucky’s program . . . They were just more mentally tough.”

After a back-and-forth opening period, the Hurricanes held a 13-12 lead. Sophomore guard Laura Cornelius, making her first-career start, and senior guards Nigia Greene and Jessica Thomas each connected on a 3-pointer in the first 10 minutes.

Kentucky (1-0) outscored Miami by a 21-10 margin over the first seven minutes and 34 seconds of the second quarter to grab a 10-point lead. The Hurricanes would pull back within three, but a 3-pointer at the buzzer by senior guard Jessica Hardin put the Wildcats in front, 38-29, entering the locker room.

Miami began the second half on an 8-1 run to cut its deficit to two, 39-37, with 6:38 on the clock. Kentucky’s lead would stay between two and six the rest of the period and it took a 57-51 edge into the final frame. Greene connected on two more 3-pointers in the frame to give her a career-high-tying three in the game.

After the Wildcats stretched their lead to 10, Adrienne Motley made back-to-back 3-pointers to slice Kentucky’s advantage to four, 65-61, with 5:08 remaining. Soon after, the senior guard then hit her third shot from long range in a span of two minutes and 14 seconds to make it 67-64 with 4:06 to play.

The Wildcats responded with a 15-2 run to close the contest, including scoring each of the final 13 points over the last three minutes and 13 seconds, to come away with the 82-66 victory in the first game of the Kentucky Classic.

“Because of some foul trouble and injuries, we were trying to execute special situations [with people in new roles] . . . So, that was part of it,” Meier said of Kentucky’s strong close. “I think we got uncertain because we were in some unfamiliar situations, but also Kentucky made some amazing plays. I thought we had them down, I thought they were exhausted they just burst out. They really just won the game. They really did, they went and got it.”

Sophomore forward/center Emese Hof, who averaged 8.6 points and 5.5 rebounds last year, was limited to three minutes of action due to injury.

Motley led a quartet of Hurricanes with double-digit points, registering 16 and making four 3-pointers. Greene posted 11 points, more than she had in any game in 2015-16, while Thomas and junior forward/center Erykah Davenport each added 10.

Redshirt senior forward Keyona Hayes notched eight points and a co-game-high 10 rebounds. Cornelius finished with a game-best seven assists to tie her career high, which she set on Jan. 17, 2016 at North Carolina.

Kentucky senior guard Makayla Epps poured in 29 points, the most by a Miami opponent since Indiana’s Tyra Buss had 28 on Dec. 20, 2015. Senior forward Evelyn Akhator logged a double-double, recording 18 points and 10 rebounds, and sophomore guard Maci Morris chipped in with 11 points.

“This is a great game and I told my team, everyone else across the country is playing somebody, winning by 50 tonight and we are sitting here,” Meier said. “We are a great team and we take a loss on the road. I wouldn’t rather do that, but winning by 50, I wouldn’t have learned what I learned tonight and we wouldn’t know what we had to fix . . . We have four straight postseason teams to open up the season because I have a veteran squad. I trust our talent and I know that we are going to be really good by the end of the year.”

Miami will return to the court Sunday at 7 p.m., when it takes on Albany in its second and final game of the Kentucky Classic.

·         This is the first time Miami has fallen in its season opener since 1996, snapping a streak of 19 straight wins to begin a campaign. That year was also the last time the Hurricanes faced a Power Five team in game one, falling to Florida, 65-58, on Nov. 22 on a neutral court.

·         Meier, who is now 14-2 in season openers, had a 13-year streak of victories in the first game of a year snapped. Her last defeat was in her second year as a head coach, at Charlotte.

·         The last time the Hurricanes were under .500 at any point in a season was nearly three full years ago, when they dropped two of their first three games of the 2013-14 campaign.