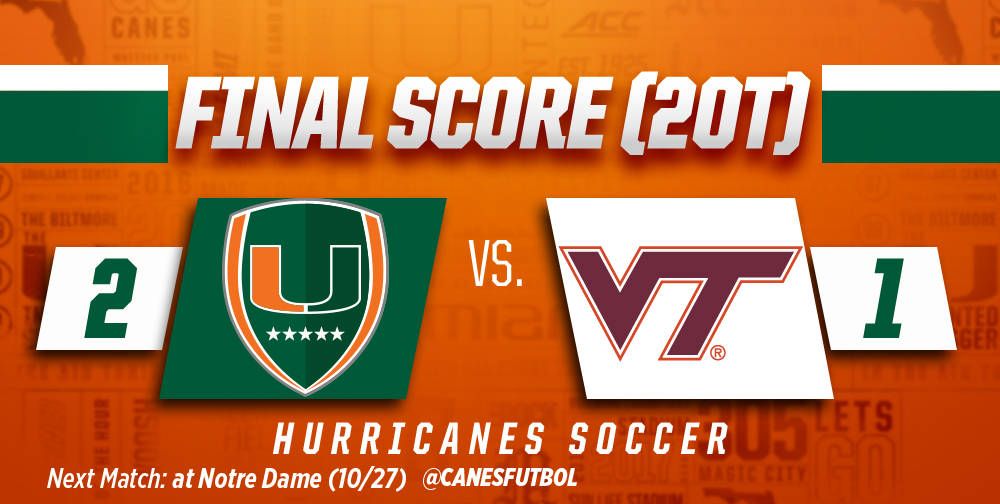 CORAL GABLES, Fla. – Behind a pair of goals from Gracie Lachowecki, the University of Miami soccer team registered a 2-1 comeback win in double overtime against No. 25 Virginia Tech to clinch a berth in the ACC Championship.

The senior forward, playing her final regular season match at Cobb Stadium, tied the score in the closing minutes of regulation Sunday and then found the golden goal just 63 seconds into the second session of extra time on senior day.

For Miami (10-7-0, 5-4-0 ACC) the win not only sealed its trip to the ACC Championship for the first time since 2012, but gave the Hurricanes five conference victories in a season for the first time in program history, regardless of league affiliation.

“I am just so proud of this group. We’ve been working so hard,” Miami head coach Mary-Frances Monroe said. “I’m just ecstatic for our seniors. When I was hired, they were our freshmen. From not knowing their first name and what position they played when I first got here, to making it a goal to make it to the ACC tournament, I’m just so proud of them. They did everything in their power to make that happen today.”

Miami had a trio of scoring chances between the 16th and 23rd minutes, but the Hokies, who were unbeaten in their last five matches, held strong each time.

In the 33rd minute, senior midfielder/defender Gianna Dal Pozzo made a spectacular play to keep the match scoreless. After Virginia Tech (10-5-3, 2-4-3 ACC) junior midfielder Madi Conyers hit the inside of the post, the ball rolled in front of the goal line and Dal Pozzo sprinted in to kick the ball away, just before a Hokie could tap it in.

Virginia Tech scored the first goal of the match in the 50th minute when senior forward/midfielder Bria Dixon played a cross in, just in front of the goal line, and senior forward Murielle Tiernan knocked it into the net.

Sophomore midfielder Jamie Brunworth, who played a career-high 57 minutes, was inches away from tying the score in the 83rd minute when she hit the post on an acrobatic shot in the box.

In the 85th minute, Miami found its equalizer. Lachowecki passed the ball in the box to junior forward/midfielder Grace Rapp and she played it back to Lachowecki, who beat redshirt junior goalkeeper Blayne Fink to tie the score.

The goal was the 23rd of her career, moving her past Lindsey Yach into sole possession of third place on Miami’s all-time list. Additionally, it was her 10th goal of the season, making her the first player in program history to notch double-digit tallies in multiple seasons.

Neither team scored in the final minutes of regulation or in the first session of extra time, though the Hurricanes did have several chances, and Miami went to double overtime for the second time in its last four matches.

Once into the final frame, Miami did not need much time to score the match-winning goal. Freshman midfielder Lauren Markwith, earning the first assist of her career, played the ball to Emily Auld, who was making a run down the left side of the field. The senior defender then crossed the ball into the box and Lachowecki beat Fink in the 102nd minute to set off a mass celebration for the Hurricanes on the field.

“We were down one goal and we always count on Gracie—that she’s going to find a way to score,” Monroe said. “I knew, [with her] being a senior and it being her last regular season home game, that she wasn’t going to take the 1-0 loss. She put it on her shoulders and she got the equalizer. Then, we calmed down a little bit and just did an amazing job of, with all-out effort, getting that second goal.”

Lachowecki’s 11 goals this year are tied for fourth-most in a campaign in program history, while her 12 last year rank third. Additionally, she now has 25 points in 2016, tying her own mark from 2015 sixth place on the Hurricanes’ single-season list.

The two goals Sunday also gave Lachowecki 54 points in her career, good for fourth-most at Miami. Additionally, Lachowecki now has five match-winning goals, tied for the sixth-most by a Hurricane.

Miami’s win over Virginia Tech marked the first time in 2016 it has trailed in a match and come back to post a victory.

“I honestly believe it’s the respect that our team has for the seniors,” Monroe said of what was different Sunday. “They know it’s not their last home regular season, but they knew the seniors are so important that they wanted to make sure we didn’t stop today.”

Auld, Dal Pozzo, Lachowecki and redshirt senior defender Shannon McCarthy, each joined by their parents, were all honored prior to the match.

For Miami, the win was its second over a top-25 opponent this season, matching its total from the previous three seasons. The Hurricanes previously defeated second-ranked Virginia, 2-1, in their ACC home opener. Miami now has 22 all-time wins over ranked teams, with three coming in extra time, two of which were in double overtime.

This is the first time since 2008 Miami has won five consecutive home matches and the second time it has ever gone undefeated at home in ACC play, joining a 4-0-1 showing in 2007. In addition, the Hurricanes have now reached double-digit victories for the seventh time in program history, the fourth since entering the ACC and first since 2011.

Miami’s appearance in the ACC Championship will be its fifth since joining the conference and fourth in an eight-team format. The Hurricanes had been picked to finish last in the ACC coaches’ preseason poll.

“We talked about it in preseason, actually. I said, ‘There are a lot of people who don’t have respect for this group. What better way to [show what we can do] than to put all the pieces together and perform this season,'” Monroe said. “It took every single one of our players to make that happen. From players who play 90 minutes, to players who don’t play at all, they have to commit themselves every day to train and keep the environment so high and that’s what we were able to do, collectively as a group. We just made it our goal to get into the ACC tournament.”

The Hurricanes, who are guaranteed to finish in the top seven of the conference standings, will conclude the regular season Thursday night when they play at No. 14 Notre Dame at 7 p.m.