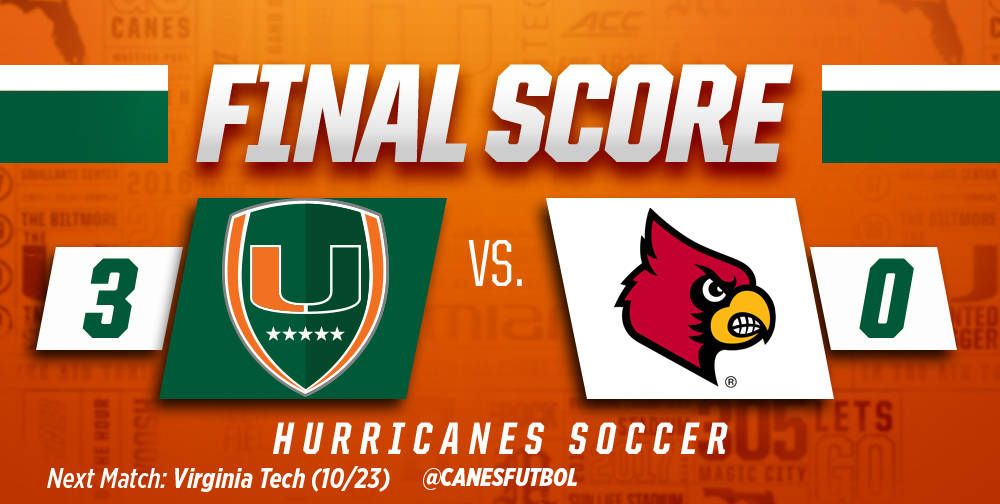 CORAL GABLES, Fla. – The University of Miami soccer team recorded a 3-0 win against Louisville Thursday night at Cobb Stadium, with all three goals coming off the foot of Ronnie Johnson.

The junior forward posted the first hat trick of her career to help Miami (9-7-0, 4-4-0 ACC) tally a fourth consecutive home victory for the first time since 2008.

“Ronnie had a fantastic night—not just her hat trick,” Miami head coach Mary-Frances Monroe said. “She did a really great job for us up top holding the ball tonight. She’s been inconsistent at times as the season has gone on and tonight I think that she pulled off a great 90 minutes of play.”

Miami’s first goal came in the ninth minute after stellar passing led to a superb chance in the box for Johnson.

Senior forward Gracie Lachowecki played the ball to junior forward/midfielder Grace Rapp, who found an open Johnson and she beat Louisville (7-5-4, 2-4-3 ACC) senior goalkeeper Taylor Bucklin to give the Hurricanes an early lead.

Lachowecki nearly doubled Miami’s lead in the closing seconds of the first half, but Bucklin made a stellar save, knocking the ball over the crossbar to keep the Cardinals within a goal.

The Hurricanes led 1-0 entering the locker room after a fairly even 45 minutes of play. Miami had seven shot attempts to Louisville’s six and notched three shots on goal to the Cardinals’ two.

After the Hurricanes had several strong chances throughout the second half, it was in the 81st minute that Johnson found the back of the net for the second time.

Following a Miami corner kick, the ball was played back into the box from the opposite corner and after rolling around, it landed with Johnson, who sent a vicious strike past Bucklin.

Under three minutes later, Johnson scored yet again. Lachowecki dribbled into the box and passed to sophomore midfielder Jamie Brunworth, who earned her second assist of the season by tapping it on to Johnson for her to slip it into the net.

For Lachowecki, the play gave her multiple assists in a match for the first time in her illustrious collegiate career.

Redshirt sophomore goalkeeper Phallon Tullis-Joyce logged three saves to lead Miami to its seventh shutout victory of the season, tied with 2009 and 2010 for its fourth-most in a season.

“Our back line and our midfielders, even our attacking players, collectively as a defensive unit, I thought we did a great job,” Monroe said. “Louisville is very direct and they have some dangerous players out there and we did a great job of winning the first ball and the second ball, then staying composed on the ball. So, I was very proud of that, defensively.”

With the win, Miami has now tied its most victories in ACC play in program history. It is the fifth time the Hurricanes have notched four conference triumphs since joining the league in 2004.

Additionally, it is the third time Miami has posted four ACC home victories, joining 2007 and 2013. The only other time Miami has won four straight ACC home matches was in 2007.

The Hurricanes’ only other three-goal win in ACC play was when they defeated Clemson, 3-0, on Oct. 1, 2010. This is the first time they have done so at home.

“I think they, collectively, played great tonight as a team. We had a lot of energy, we followed the game plan,” Monroe said. “We had some players step up and do some really special things, not just on the goals that Ronnie scored, but around the field, we did some special things.”

Miami and Louisville entered the match tied for eighth place in the ACC, which has eight teams reach the conference tournament. With the victory, Miami now sits in seventh place with two matches left.

Up next for Miami is a Sunday showdown at noon against No. 25 Virginia Tech in the season’s final contest at Cobb Stadium. The match will serve as senior day for Lachowecki, defender Emily Auld, midfielder/defender Gianna Dal Pozzo and defender Shannon McCarthy.