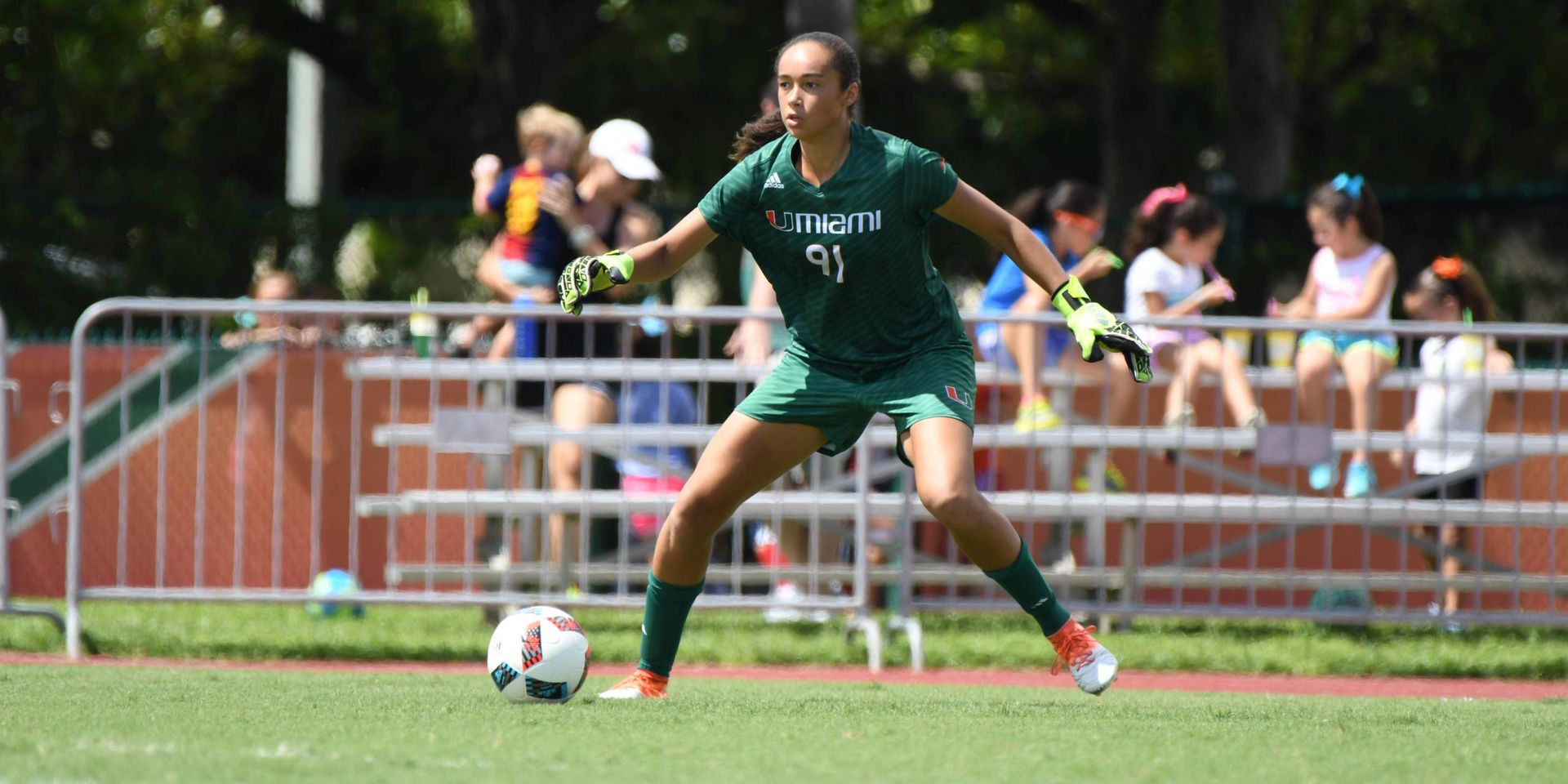 Miami (8-6-0, 3-3-0) had several outstanding opportunities in the match, including an early breakaway and a shot that hit the post in the first overtime, but the Panthers won it on a penalty kick in the 106th minute.

The Hurricanes very nearly went in front in just the third minute of the match when Ronnie Johnson stole a pass from one Pittsburgh (2-11-1, 1-5-0 ACC) defender to another. The junior forward then raced towards the net and was one-on-one with senior goalkeeper Taylor Francis, but her shot missed just wide to the right.

That would prove to be just the first of several stellar goal-scoring opportunities for the Hurricanes in a dominant first half during which they controlled play and possession. However, Miami was unable to find the back of the net in the opening 45 minutes.

The Hurricanes outshot the Panthers, 8-2, in the first half and had a 4-2 edge in shots on goal. Johnson and senior forward Gracie Lachowecki were especially vital in the offensive attack, as each was involved in several chances.

In the 76th minute, it was Johnson again who almost gave Miami the lead. Senior defender Emily Auld sent a corner kick into the box and Johnson splendidly headed it to the far post, but a Pittsburgh defender was there to save it off the line.

Tullis-Joyce made a fantastic save in the 89th minute to keep the match scoreless, stopping a shot by Pittsburgh senior defender Arielle Fernandez from about eight yards out.

Miami then nearly scored in the final 30 seconds when senior midfielder/defender Gianna Dal Pozzo had a loose ball come to her feet after a corner and she sent a blast that missed just high on the final play of regulation.

Despite a 16-10 advantage in shots, including an 11-6 lead in shots on goal, Miami headed on to extra time for the first time in 2016, after playing six such contests last year.

Johnson nearly ended the match in the first minute of extra time, but her shot from the edge of the six-yard box missed just high.

In the 98th minute, it was Shannon McCarthy who almost earned the win for the Hurricanes. After a loose ball off a corner kick rolled to her feet outside the box, she sent a shot in that clanged off the inside of the post and bounced away just staying in front of the goal line.

A penalty kick was award to Pittsburgh in the 106th minute and junior midfielder Hanna Hannesdottir stepped to the spot and buried the ball in the right side of the net for the match-ending golden goal.

Miami finished the game with an 18-14 edge in shot attempts and a 12-8 advantage in shots on goal. Francis, the ACC’s saves leader, came up with 11 stops on the day.

The Hurricanes will wrap up their three-match road swing Friday at 7 p.m, when they meet No. 12 Clemson at Historic Riggs Field.