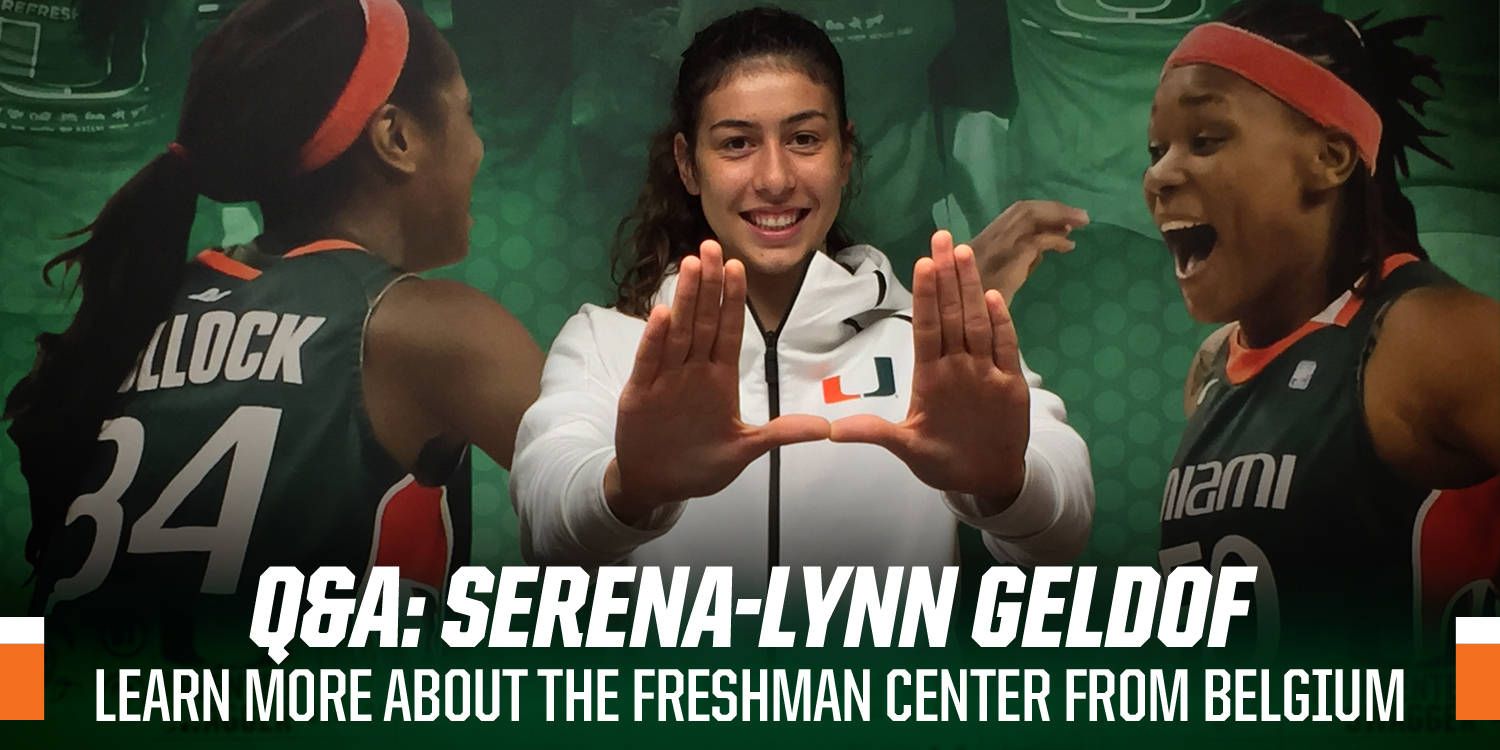 CORAL GABLES, Fla. – Six-foot-six-inch freshman center Serena-Lynn Geldof of the University of Miami women’s basketball team is one of the two tallest players head coach Katie Meier has had in her 12 years leading the Hurricanes.

A native of Ostend, Belgium, with quite a bit of competitive international experience, Geldof is in her opening weeks at Miami and she sat down with HurricaneSports.com to detail how she ended up in Coral Gables and how she is liking it, among many other topics . . .

Q: How has your experience at Miami been thus far?

A: Everything is going pretty well. It’s nice. It’s different than Belgium. I like it so far, except for the fitness test. That’s just a bummer [Laughter], but I made it [Laughter]! I think everything is pretty cool. The staff is cool. They are always there for you when you need them. The teammates are really connected to each other . . . and they are also there for you. I know it’s going to be difficult for me to adapt because it’s totally different than Belgium, but I think I can manage that with their help. I think it’s going to be good.

Q: What has been your favorite part of Miami so far?

A: A little bit of everything. I like everything so far. It’s better than I expected. Now, I’m just waiting for the real practices to happen, but the practices we’ve already had as a team, I think are pretty good. Everybody is supporting each other to get the best out of each other and I really like it. Also, the coaches, they have patience with you. They say, ‘Yeah, you can do that,’ even if you don’t show it that time. They know you can do better and they just need to get you into the flow.

Q: You said it is better than you expected. Why is that?

Q: Have any players really helped you out with getting acclimated and adjusted?

A: I think they just try to get me [involved with] the team. The freshmen, Sarah [Mortensen] and I, we’re in the same dorm . . . Sarah [got here before me] and was like, ‘Oh, come, and we can do this and we can do that!’ . . . We’re freshmen so we stick together. I think most of them do. Also, a lot of others on the team [are there for me] if I need something. For example, I asked Khaila [Prather] to bring me to get a bike and she was like, ‘Yeah, when can you go?’ They are always there for you.

Q: What made you decide to come to Miami?

A: Actually, I never thought of coming to the States before. It was just not for me. Everybody was like, ‘I want to go to the States,’ and I was like, ‘No. I’m going to stick in Belgium. [Laughter] I’m going to stay there.’ We were at the [FIBA U19] World Championship in 2015 and the assistant coach was Ann Wauters, [the first pick in the 2000 WNBA Draft], and she was like, ‘Have you already thought about going to the States?’ I was like, ‘Actually, I never thought about it really because it was not for me.’ She said, ‘You should do that! You should really consider that because that would be great for you. They are really going to help you there to improve.’ Then, she told me Miami [while on its European tour last summer] was playing in Waregem in Belgium. I went to that game and then I started [to think], ‘Hmm, yeah, they are totally different and maybe why not?’ That’s how I started looking at the colleges that I got [recruited by]. Because I went to that game, it kind of stayed there with me. I was really into their environment, so that’s why I decided to come here.

Q: How would you describe the type of player you are?

A: A player that has a lot to learn [Laughter] . . . I think I need to improve everything, but [one] thing that I want to be good at is rebounding. I want to be fast for a tall player. Most of the tallest players are a little bit slower, so I want to be quicker than them. I want to just [be a player] that they know is dangerous. [I want people to know] that they can’t let me stand on the elbow because I can shoot, that they know they can’t sprint to me because I can just drive, my post moves when I have the ball inside [are good and I am] also dangerous with my height.

Q: What is the strongest part of your game right now?

A: In the games in Belgium, it was setting screens and slipping. Also sometimes screening and popping. Those things, but I also like to wait in the corners and then one of the guards makes space [and passes to me].

Q: Academically, did you decide what you want to major in and, if so, how did you pick that?

A: I haven’t decided my major yet, but I want to be in forensics. So, I don’t know yet how to get there, but I want to look at some fingerprints and some blood spatters. Yeah, I’ve watched a lot of ‘CSI: Miami’ [Laughter].

Q: What are the biggest differences and similarities to home from here?

A: The playing is different. [Here], they are much faster [and more] athletic. It’s just different than in Belgium . . . but still, I think, the passion behind it is still the same. The people in Belgium who are in basketball are passionate to play it, but also here. So, it’s just the kind of playing.

Q: What are you most excited for about your freshman season?

Q: Are there any players you kind of look up to and try to emulate?

A: I look up to [Belgium natives] Ann Wauters and Emma Meeseman because they are also tall . . . and they are really making it.