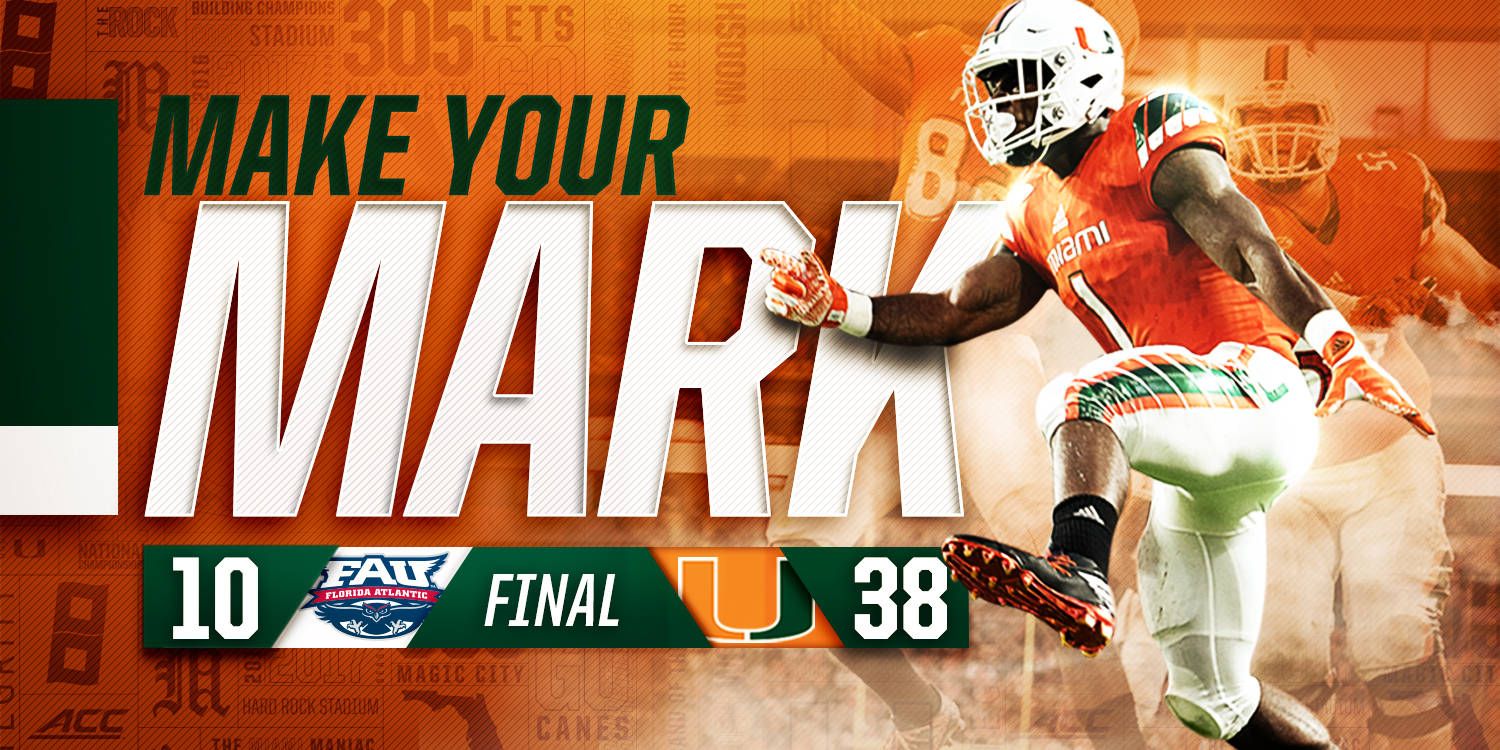 Walton, who led Miami with 10 total touchdowns as a freshman in 2015, became the first Hurricane since 2012 to record a four-touchdown game and only the sixth in program history to record at least four rushing scores in a single contest.

“I wasn’t trying to put too much pressure on myself,” Walton said. “I just wanted to be the guy who sparked the team tonight, and that’s what I did. I was just trying to play my game and be relaxed.”

Junior running back Joe Yearby added 121 yards on 20 carries, as Miami outgained the visitors 279-47 on the ground.

“He ran the ball extremely well. He’s very physical,” head coach Mark Richt said of Walton. “I guess somebody told me he had four touchdowns, that’s a bunch. 9.1 yards per carry, that’s pretty good. He did a nice job.”

Despite heavy rains that arrived with less than a minute remaining in the third, the 57,123 fans in attendance were treated to another strong performance by the Miami defense and an offense that came through with a second-half surge.

“I thought our defense played spectacular, very obvious how great they played,” Richt said. “They would not let it get interesting at all, with the way they played. Hats off to Coach Diaz and the rest of the defensive staff, and the players…just a beautiful job.”

Miami (2-0) enjoyed another exceptional start on special teams when sophomore defensive lineman RJ McIntosh blocked FAU’s punt attempt on the game’s opening drive. It was the second straight week the unit made an early impact; freshman Pat Bethel blocked a punt on Florida A&M’s first series in the season opener.

Things didn’t get better for Miami on its next offensive drive, when Kaaya threw his first interception of the season on the first play of the series.

Neither team was able to generate any offense in the first quarter, with the two sides combining for just 98 total yards.

Miami finally broke through with 7:53 left in the half, with Walton running it in from 7 yards out for the game’s opening touchdown. Kaaya completed passes of 20, 14, 9 and 13 yards on the drive, which started on the FAU 39 thanks to a 13-yard punt return from junior Braxton Berrios.

Kaaya’s second interception of the game came with 5:14 left in the half and put the Owls on the Hurricanes’ 26. Miami’s defense, which held the Owls to just 85 first-half yards, came up with another stop and held FAU to a field goal to maintain a 7-3 lead.

Kaaya finished the game 17-for-31 for 191 yards and two interceptions.

“Offensively, not pretty by any stretch. We were off in our timing throwing and catching a little bit. We had some opportunities, but just couldn’t cash in on them. We have to get better there,” Richt said.

The Hurricanes pushed their lead to double-digits with less than two minutes remaining in the first half. Yearby rushed for 24 yards on the drive and Walton put Miami on the FAU 3 with a 29-yard carry. The sophomore finished off the drive with a hard-nosed 3-yard plunge into the end zone, pushing the Hurricanes’ lead to 14-3.

“Honestly, bubbles are just a good way to spread that box out, just get those linebackers playing on the edge of the box and just allowing our run lanes to be wide open,” Kaaya said. “It’s an easy pass, easy 10 yards. We’ll take it all the time.”

It was the second straight 100-yard game for Walton, who ran for three touchdowns in the 2015 matchup against the Owls.

The Hurricanes drove 65 yards on their opening drive of the second half and pushed their lead to 17-3 on a 27-yard field goal by Badgley.

“We just began to run the ball and have what people call ‘RPOs’ – just run-pass option stuff, simple zone plays with the little bubble screens to the receivers,” Richt said. “That kind of settled us down and we started moving the ball on a consistent basis, and we executed well.”

Pinckney, starting his second game for the Hurricanes, made seven first-half stops.

“It’s not easy, but we prepare,” Pinckney said about making an early impact. “If you know what you’re doing out there, then it’s not too complicated. We practice all week. We got an opportunity, and we just did it.”

“When the games are over and we win, I’m mostly just thankful,” Richt said. “I don’t get too jacked up one way or the other. Every once in a while, the juices will pump on a victory, but I’m more thankful that we got the victory. I’m thankful the guys played well, overall.”