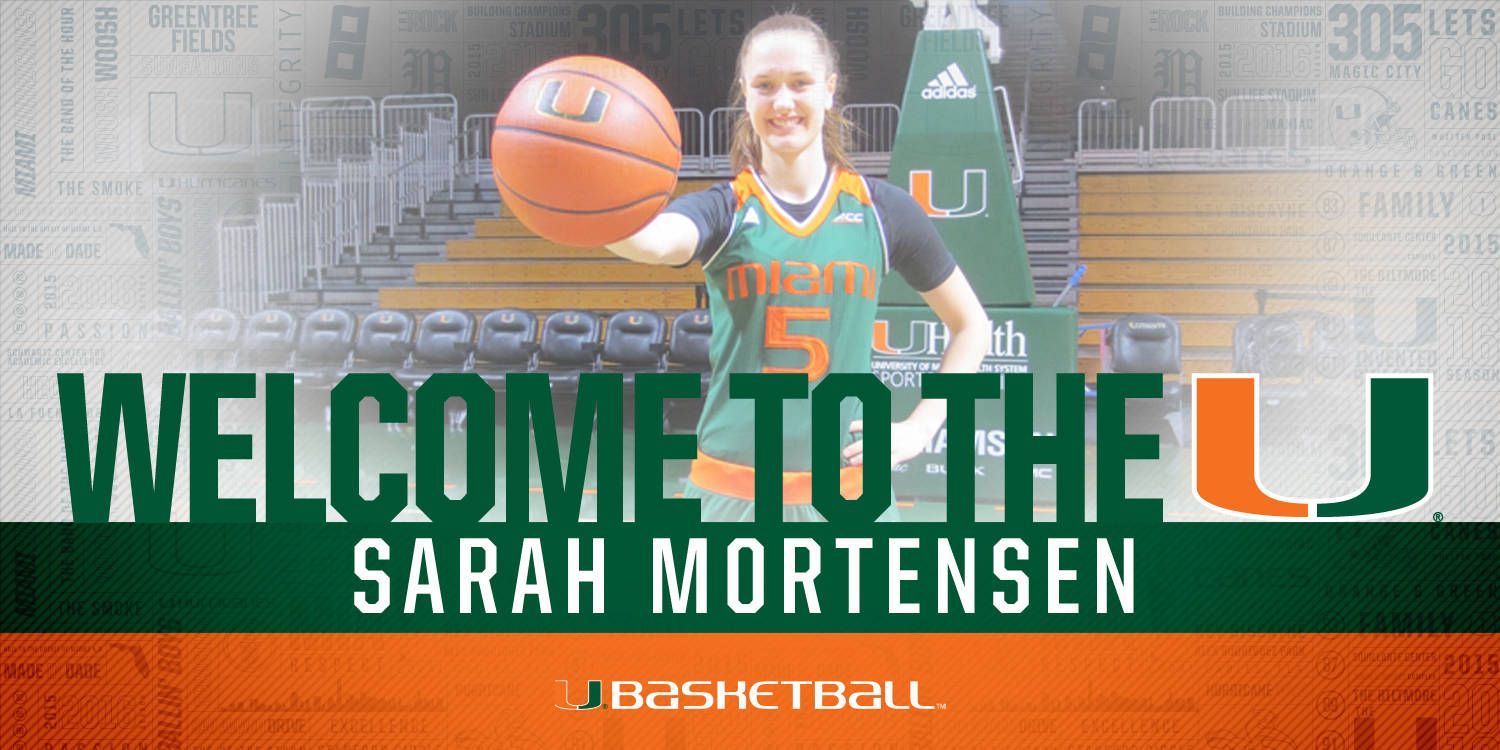 A 6-foot-1-inch guard/forward originally from Denmark, Mortensen attends Long Island Lutheran in Brookville, N.Y. She is set to join the Hurricanes for the 2016-17 season.

“She consistently, 100 percent of the time, battles. She wins the little fights on the basketball court,” Meier said. “She’ll win the box out. She’ll sneak by someone and get a backdoor cut. So, mentally, she’s always competing on little things. I think it was a huge need for us to bring in someone who can have that mental intensity towards the game.”

In 2015-16, her first and only season at Long Island Lutheran, Mortensen led the Crusaders to the AA state title game, a 19-5 record and a No. 3 ranking in the MSG Varsity tri-state (CT/NJ/NY) rankings. She was also named by MSG Varsity as an All-Metro First Team selection and the Long Island Player of the Year.

ProspsectsNation.com ranks Mortensen as a four-star prospect and the No. 15 international player in the class of 2016, including the third-best wing. This marks the third year in a row Miami has inked at least one of the site’s top-20 international recruits.

“Not only [was Miami] able to get a top-100-caliber talent, but I think it’s also getting a kid who really, really wants to be in the United States and really wants to play basketball in the ACC,” ProspectsNation.com Director of Scouting Keil Moore said. “When you talk about a kid who’s talented and has that level of want, it’s a special combination. I think that’s a kid who’s going to be successful at Miami just simply because she’s going to accept whatever role, whatever’s asked of her. She’s going to go above and beyond.”

Mortensen has played in three international FIBA competitions for her home country, most recently participating in the 2015 U18 European Championship Division B. There, she averaged 14.0 points, 8.4 rebounds and 2.6 assists over five games, helping Denmark to a trio of victories.

In two of her five outings, Mortensen logged a double-double, including posting 26 points and 13 rebounds against the host nation of Romania. Mortensen led all players in the tournament free throw percentage at 85.7 percent (18-of-21). She also ranked fourth in free throws made per game (3.6), eighth in scoring and ninth in rebounding.

“She is very, very smart and very crafty,” Meier said. “She looks real skinny, but she plays stronger than she looks. Then, she can take and hit any shot to win the game. She can take a trail three and she’ll get an and-one in the paint. Her shot chart is very versatile. So, she’s just perfect for our system. We’re really excited.”

Along with Mortensen, Miami will have transfers Shaneese Bailey, a guard/forward from Florida Atlantic, for the 2016-17 after sitting out a year as a transfer. In addition, Neydja Petithomme, a guard from Auburn, will become eligible to play after final exams in December of 2016.

On what initially drew her to Mortensen: “The film, it was just her versatility. It was this versatile kid who [reminded me] a little bit of Necole Sterling and a little bit of Ray Ray [Suriya McGuire]. When I saw her in person, the first five possessions of the game she got an offensive rebound and putback and it was all sneaky. It was anticipation, it was crafty movement and great body control. When I saw her in person, five possessions into the game, I was done.”

On what Mortensen can do to play early: “She’s going to contribute early, immediately. Now, we do play a deep bench, so she’s going to get her opportunities for sure, but this is the kind of player who, given an opportunity, she’s not going to waste it. She’s going to make the most it. It’s her grit, I’m telling you. The kid will take on any challenge, she won’t back down from anyone and she’ll take and hit a big-time shot, or get the huge rebound that you need. She just is a very timely player.”

On Mortensen’s success at the high school level: “To come from another country and to play for Rich [Slater] and to have the season that she had and be Long Island Player of the Year and all that says a lot about Sarah. Rich’s endorsement of Sarah was everything I needed to know because he is an unbelievable coach. He’s tough on his kids, he pushes them and they play a tough schedule. They play anyone, anywhere, any time, never back down. She has a fearlessness about her game that we really need and I really love about her.”

On Mortensen’s skill set: “She’s a big wing who brings kind of a classic European feel . . . [and is] really talented. She can shoot the ball out to the international 3-point line, is good enough with the basketball where she can put it on the floor and create, whether it’s a passing angle or a shot for herself. She can handle the ball well enough to make some stuff happen [and she has a] really good feel for the game. I think, when you compare her, she’s different than the guards [Miami has] right now . . . She’s going to probably be almost more like the Notre Dame kids, where they’re beating you by precise attacks and making shots and just being at the right place at the right time.”