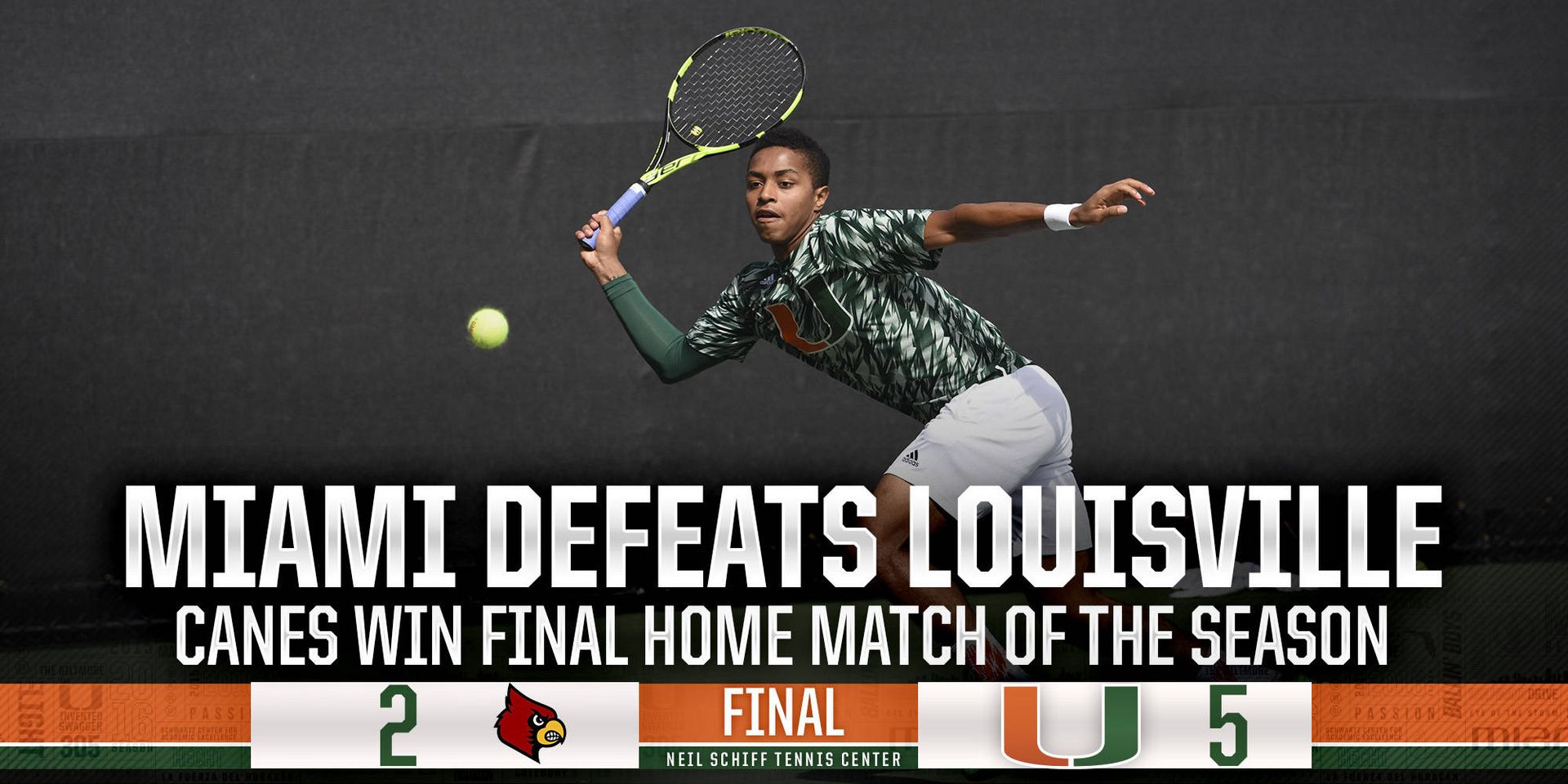 “I think Louisville is a good team and we needed a win at home to end our regular season,” said head coach Mario Rincon. “I’m very proud of the way the guys competed, and we’re looking forward to playing Virginia Tech and Virginia on the road next weekend.”

After being tied 2-2 to begin the match, Miami won three-straight courts to take home the victory.

“It was exciting for the guys to pull through a tough match, especially our last match here at home. It was a wonderful way to go off,” said assistant coach Mark Dickson.”Our fans really enjoyed it, which was great. It was exciting, and I was really pleased with the way a lot of the guys competed in singles. It was just a complete match throughout.”

The day began with doubles action, where the Cardinals were able to grab the doubles win on courts two and three. Jesse Flores and Piotr Lomacki fell to Jeffrey Brown and Christopher Morin-Kougoucheff, 1-6. Freshman Fermin Calvo and sophomore Nile Clark were unable to gain momentum, falling to Sean Donohue and Courtney Lock, 1-6. The 66th-ranked junior duo of Max Andrews and Bernard Tefel left their match unfinished, tied at 4-4, against Alex Gornet and George Hedley.

With Louisville securing the doubles point, the Canes looked to singles and successfully answered the Cardinals.

Setting the tone with a commanding performance, sophomore Niclas Genovese grabbed his first win of the season, downing Christian Haushammer. Genovese won his first set 6-3, and put up a shutout, 6-0, second set to give Miami its first point of the day.

Then came the Hurricanes. Tefel began the attack by battling it out in a tiebreak second set to defeat Carlo Longhi Neto 6-3, 7-6.

Then the match came down to what turned out to be a pair of three-set thrillers. The Canes looked to Flores who victoriously closed out, delivering a 6-4, 1-6, 7-6 win over Brown. Andrews followed up with the Canes’ final win of the day downing Morin-Kougoucheff in a come-from-behind 4-6, 7-5, 6-1 victory.

Miami now has three wins in ACC action, the second-most league victories in the past five seasons for the Hurricanes. In 2014, Miami posted four ACC wins, the most since the 2011 campaign.

The Canes will wrap up the season next weekend on the road in Virginia. Miami will take on No. 40 Virginia Tech on Friday, April 15 at 1 p.m. in Blacksburg, Va., and No. 3 Virginia on Sunday, April 17 in Charlottesville, Va., at Noon.