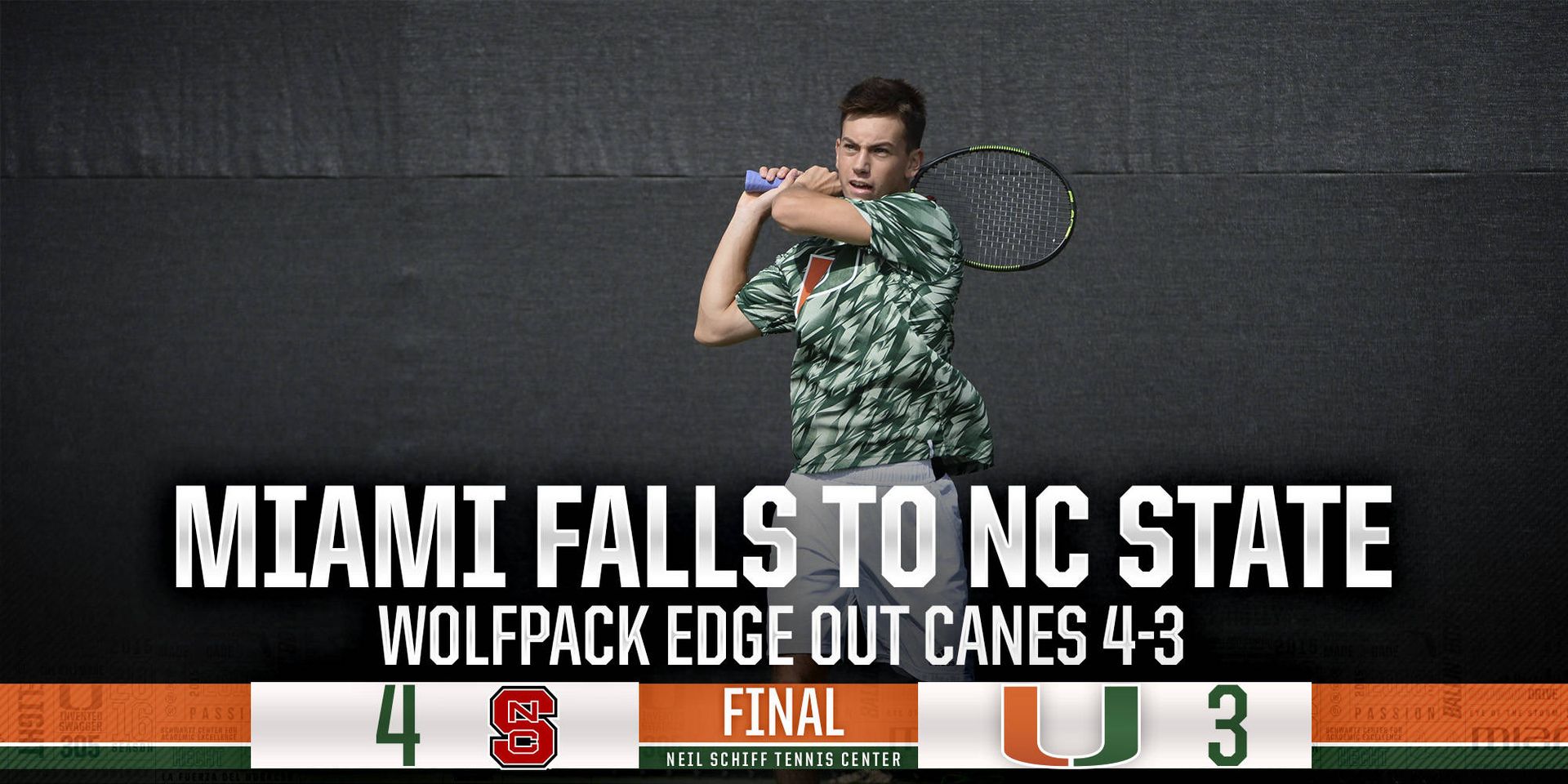 CORAL GABLES, Fla. – The No. 75 University of Miami men’s tennis team began its weekend schedule of home matches with a 4-3 loss to No. 41 NC State Friday afternoon at the Neil Schiff Tennis Center.

After falling behind 0-2 early, the Canes tied the match 3-3, but ultimately fell on Court 6 to end the day.

“First of all, the doubles point was so valuable today at the end, and it made the difference,” said head coach Mario Rincon. “We didn’t play very well, and we were a little bit flat at the beginning. The guys were really slow to start, but we got a little bit of momentum and played better to make it competitive. But that’s still not the way we can play doubles.”

The Canes were unable to pick up the doubles point, falling to NC State on Courts 1 and 2. No. 66 Max Andrews and Bernard Tefel suffered their first loss in four matches, dropping their match 0-6 to Simon Norenius and Thomas Wiegel.

Newly paired Jesse Flores and Piotr Lomacki lost to Michael Ogden and Nick Horton at the No. 2 position, 4-6. Freshman Fermin Calvo and sophomore Nile Clark also made their debut as a duo, and left their match unfinished against Igor Saveljic and Ivan Saveljic, 5-2.

With Miami trailing 1-0, the Canes worked to find success in singles play. Flores was unable to develop a consistent rhythm and fell to No. 93 Horton, 3-6, 4-6, putting Miami behind 0-2.

But a pair of singles victories quickly put the Canes back in the match. Calvo came out victorious, giving Miami its first point with a dominating 6-3, 6-4 win over Igor Saveljic. At the No.6, Tefel tied the match with a win over Shoti Meparidze, 7-5, 6-2. Andrews battled hard but fell to No. 119 Weigel, 4-6, 4-6, again giving NC State the edge.

It came down to Niclas Genovese, who forced a thrilling three sets, but ultimately fell to Chris Mikrovas, 6-4, 6-7, 6-4.

“I thought Niclas [Genovese] did a great job of working his way back into the match, getting into the third set, and giving himself an opportunity to win the match, and for the team to win the match,” said assistant coach Mark Dickson. “He had not been in that situation before, and I think that he will learn from that experience.”

The Hurricanes’ final home match of 2016 will be Sunday, April 10 when Miami takes on Louisville at the Neil Schiff Tennis Center at 12 p.m.