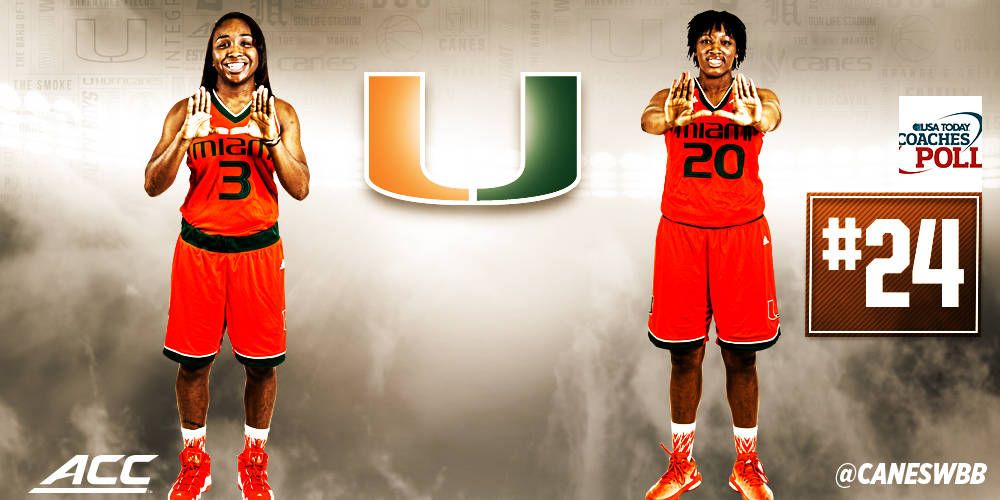 CORAL GABLES, Fla. – The University of Miami women’s basketball team is ranked No. 24 in the final USA TODAY Coaches Poll of the 2015-16 season released Wednesday.

The Hurricanes ended the season at 24-9 (10-6), tying for the fifth-most wins in a single season in program history. Miami made the postseason for the seventh-straight year and earned an NCAA Tournament berth for the fifth time in the past six campaigns.

Head coach Katie Meier’s team was nationally ranked in 15 of the 20 Coaches Poll releases this season, including 15 of the final 16. Miami peaked at No. 16 in the nation in the Jan. 19 poll during week 11.

The Hurricanes are one of five ACC teams in the final Coaches Poll of the season, along with No. 3 Syracuse, No. 6 Notre Dame, No. 12 Florida State and No. 14 Louisville. All but two of Miami’s defeats came against teams that rank in the top 15.

Miami has just one outgoing senior, Michelle Woods, from the 2015-16 roster and adds two players, Shaneese Bailey and Neydja Petithomme, who sat out this season due to NCAA transfer rules.