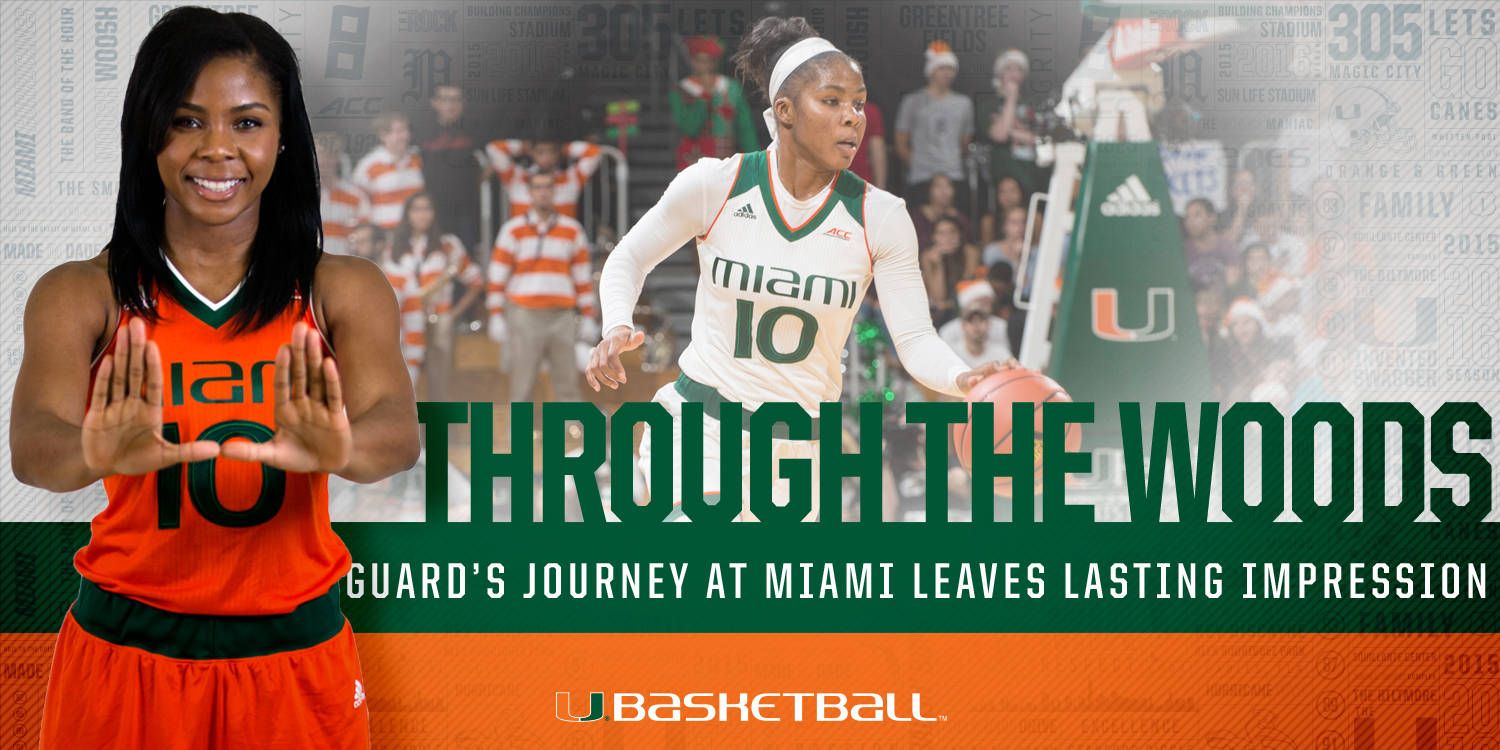 CORAL GABLES, Fla. – When students begin their journeys as college athletes it is impossible to predict what they will accomplish, how they will grow and the people they will become during their four years.

Injuries to student-athletes can threaten their entire futures. However, Michelle Woods, who began her journey with the University of Miami women’s basketball team in 2011, did not let a serious injury keep her off the court.

As a result of her motivation, dedication and patience through a difficult situation, Woods will be honored on senior night Thursday before No. 17 Miami takes on No. 10 Louisville at 7 p.m. at the BankUnited Center.

“I think the major obstacle that I had to overcome was when I got into the car accident,” Woods said.

On July 4, 2013, Woods was in a crash with three of her teammates. Due to the impact of the collision, Woods broke her sternum and was forced to sit out the 2013-14 season.

“When I got hurt, I don’t want to say I was sad. It was almost just very frustrating,” Woods explained. “I was disappointed because I didn’t know if I was going to be able to play basketball again. I had goals that I wanted to accomplish in the near future and I didn’t know if those would be possible anymore. So, I had to come up with another game plan.”

Woods is now on the road to accomplishing the goals that she aspired to achieve before the accident. The guard from Naples, Fla., made a full recovery in time for the 2014-15 season and is now a team co-captain for the 22-5 (10-4 ACC) Hurricanes in 2015-16.

“She’s actually leading, which she was not wanting to do,” Miami head coach Katie Meier said. “Early in her career she just wanted to be Chelle and give what she could give. Whenever I demanded leadership, she kind of shied away from it.

Woods, who has recorded 27 double-digit scoring games,  has developed a very strong relationship with coach Meier over the years and credits her for changing her as a person.

“She’s made me a really good basketball player,” Woods said. “Before I got here I never really used to talk. I actually didn’t talk at all. I still am a quiet person, but she’s changed me. She’s made me more confident in talking.”

Woods embraced the leadership position she once tried to avoid and as a result her confidence grew on and off the court.

“Chelle has always been quiet, but now that she is in a leadership position she is more vocal,” co-captain Jessica Thomas said. “She has opened herself up to the rest of our teammates to be that big sister on the team. She has an open heart for everyone.”

Along with having an open heart, Woods possess several other qualities that allow her to be the great leader she is.

“She is very honest,” Meier said. “You will never catch her in an inauthentic moment. I don’t think you can lead unless you have great authenticity. She is a highly respected individual.”

Woods, who was nominated for the Senior CLASS Award this season, has spent a great amount of time with the Miami basketball program and has left a lasting impression on both her teammates and coaches.  Her Hurricane family is not only proud to see her being honored on senior night, but nostalgic as well; this marks the end of Woods’ time on the home court as a Hurricane.

“I don’t know if we’ll lose the sister part when she’s gone, but we will lose having her as that older sibling that we can always attach to,” Thomas said. “She’s been with the program for so long, she understands everything.”

While Thomas noted that she would probably tear up when seeing her teammate being recognized, Meier mentioned that she is going to miss her a great deal.

“I’m not going to be in as good of a mood every day,” Meier said. “I’m going to miss her terribly. It’s going to be a rough senior night for me. The dynamic will change in a way that the silent person who just shuts up and works will be missing. Could I love anyone more? I don’t think I could love a player more than I love that kid.”

Woods could have never imaged where she would be as an athlete five years ago.  She not only made a positive impact on the people around her but grew as an individual, too.

The good and the bad have all been a crucial part of the game plan that got Woods here today; she is through the woods and one step closer to achieving her goals.