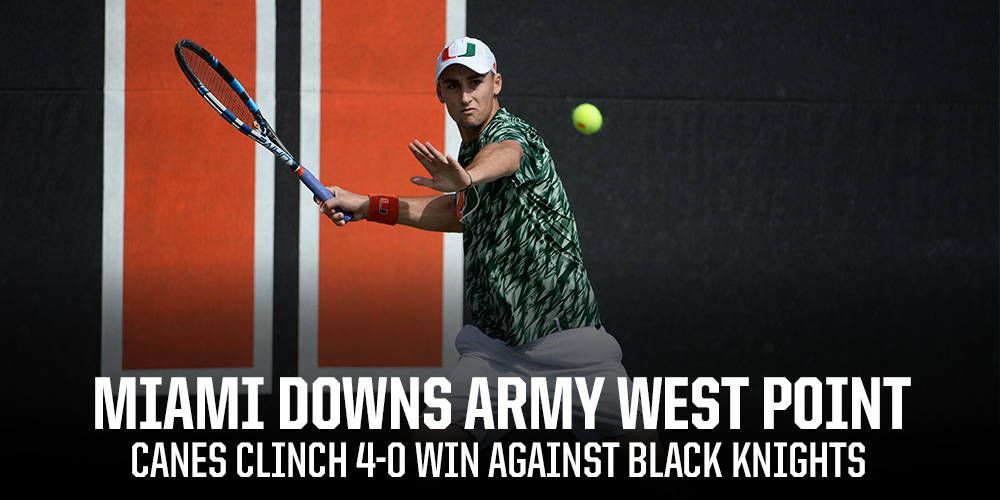 “Today was a really great match for the guys, with a very competitive match to start out in doubles,” said assistant coach Mark Dickson. “In singles we had lost the first set on three courts, so we really needed the guys to bounce back and they did.”

Through the adversity, the Canes were able to perform well as a unit with what Dickson claimed was a complete day for everyone and a complete win for the whole team.

The day began with doubles action, where the Canes developed a consistent rhythm to grab the doubles point against the Black Knights.

With the first point secured, the Canes began singles play with Andrews dominating throughout his two sets, taking down Harrison McCormick 6-0, 6-0. Freshman Fermin Calvo put up a tough performance against Michael Sienko, grabbing the 6-1, 6-1 win for the Canes. To clinch the match for Miami, No. 58 Lomacki defeated Grant Riechmann with a come-from-behind victory, 2-6, 6-1, 6-2.

The Canes now stand at 4-3 and will return to action on March 1, as they take on the Davidson Wildcats at the Neil Schiff Tennis Center at 2 p.m.