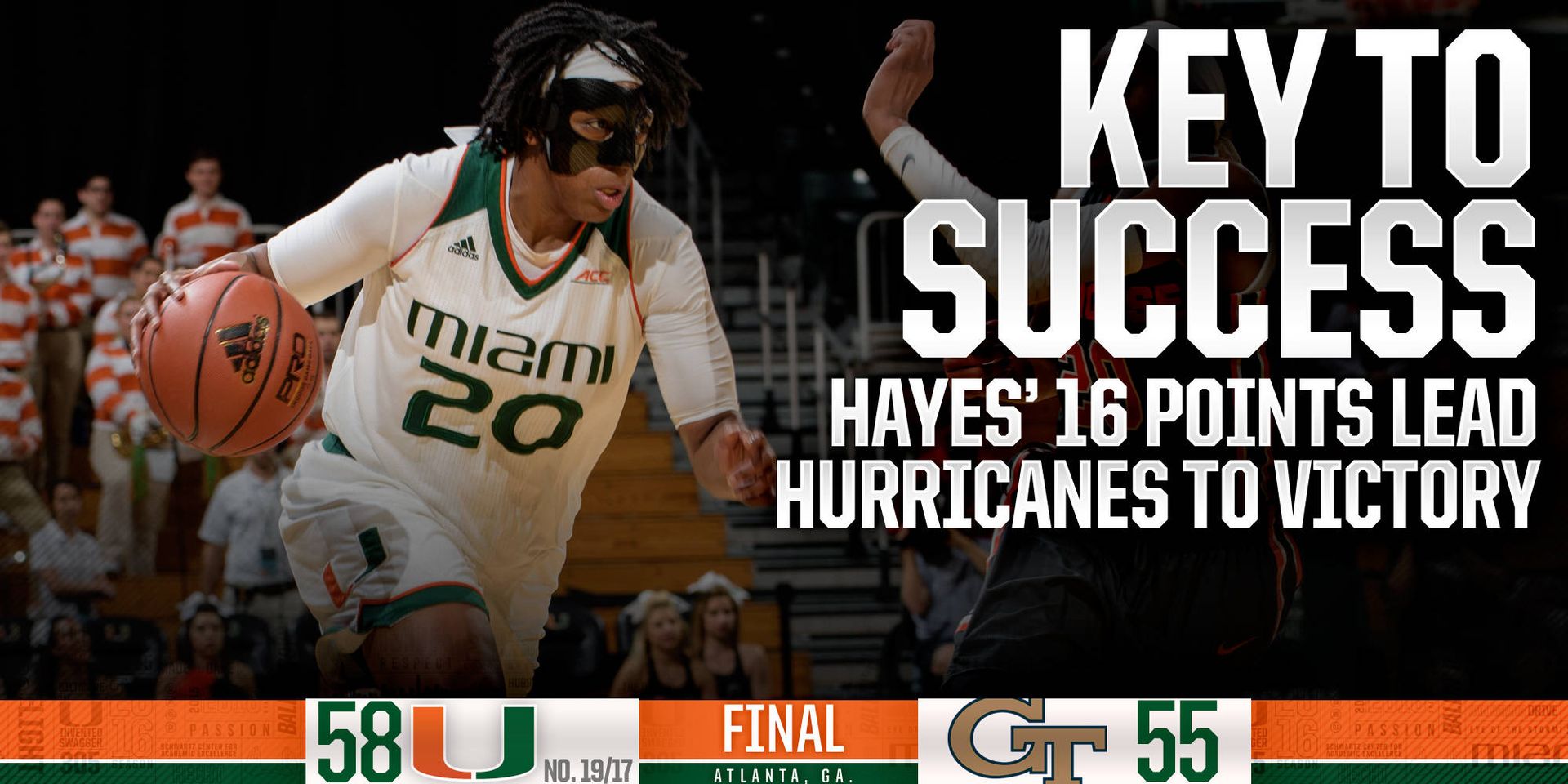 ATLANTA – The University of Miami women’s basketball team once again went on the road and came away with a victory, topping Georgia Tech, 58-55, Thursday night at Hank McCamish Pavilion.

Redshirt junior forward Keyona Hayes and sophomore forward/center Erykah Davenport combined for 28 points in front of family and friends in their native Georgia. Hayes had 16 points, including 11 in the second half, to help No. 19/17 Miami (21-4, 9-3 ACC) to its eighth road win in nine opportunities.

“When they both came on the bus I just grabbed them and I said, ‘I’m really happy for you. You’re really special people,’” Meier said of Hayes and Devenport. “We had a bunch of fans there. Erykah had over 200 people there and Key had a lot of fans there as well. They don’t come out and support you if you haven’t been nice. They’re great kids from great families.”

The Hurricanes held the Yellow Jackets scoreless for the first four minutes and 59 seconds of the game, racing out to an early 8-0 lead. The Hurricanes went on to take a 14-11 lead into the second period after Georgia Tech (14-11, 4-8 ACC) freshman guard Ciani Cryor ended the opening session with a 3-pointer.

The Yellow Jackets took their first lead of the game on a jump shot by sophomore forward Zaire O’Neil with 7:16 to go before the break. Miami then answered in a big way, countering with a 14-3 run to grab its first double-digit advantage of the contest, 31-21, with 1:47 on the clock.

Miami led for the entirety of the third period, but the Yellow Jackets ended the frame on a 6-0 run to cut the lead to two, 45-43. Five of the points came from senior guard/forward Aaliyah Whiteside, the ACC’s leading scorer, who posted 11 points in the quarter.

Cryor opened the fourth period with a 3-pointer to give Georgia Tech the lead, 46-45, but it was short-lived, as Miami scored the next three points to go back in front. The Yellow Jackets tied the score twice more, but a 3-pointer by freshman guard Laura Cornelius with 5:22 remaining gave Miami a lead it would not relinquish.

Down by three with 3.8 seconds left, Georgia Tech had one final opportunity, but the Hurricanes forced sophomore guard Antonia Peresson into an off-balanced shot that missed the mark.

Along with Hayes and Davenport, both junior guard Adrienne Motley (13 points) and junior guard Jessica Thomas (10 points) scored in double digits for Miami. This is the 10th game in a row Motley has scored at least 13 points.

“Our scoring is down a little bit [the past few games], but what people have to understand is when we’re in these close games, we’re using a lot of the shot clock on purpose and controlling the game,” Meier said. “As long as we’re in control of the game, I don’t think anyone on our team cares how many points an individual has and I felt like we were in control of this game for the most part.”

Whiteside led Georgia Tech with 20 points, with 15 coming in the second half, and added 10 rebounds. Senior forward Roddreka Rogers also posted a double-double with 15 points and a game-high 14 rebounds.

•    For the 13th time this year and the second-straight outing, Miami’s starting lineup was Davenport, Hayes, Motley, Thomas and Michelle Woods. This is now solely the Hurricanes’ most-used starting five of the season.
•    The all-time series between the Hurricanes and Yellow Jackets is now even at 13-13. Miami has won six of the past eight matchups.
•    Meier is now 280-183 in her 15 seasons as a head coach, including 204-138 in her 11 years at Miami.
•    This is the seventh time in program history Miami has won at least eight road games and the 10th time it has won at least nine games away from home. It is the third time in the past seven years the Hurricanes have reached both marks.
•    The Hurricanes have allowed 30 or fewer points in the first half of each of the past four games (23 tonight, 11 vs. Duke on 2/7/16, 29 at Boston College on 2/4/16, 30 vs. Syracuse on 2/1/16, 23 at Virginia Tech on 1/28/16)
•    In four of Miami’s last five games, it has held its opponent scoreless for a stretch of over four minutes and 55 seconds.
•    Miami has trailed for fewer than 50 seconds in each of its last two games (14 seconds vs. Duke on 2/7/16 and 47 seconds tonight).
•    The Hurricanes’ five blocks matched their second-highest mark of the season.
•    Motley has recorded over a dozen points in 21 of 25 games this season.
•    Motley eclipsed both 1,300 points and 350 rebounds in her career, as well as reached 100 3-pointers made.
•    Now with 1,308 points in her career, Motley has tied Robin Harmony for No. 13 on Miami’s all-time scoring list.
•    Motley played a season-high 38 minutes, also her career high in ACC play, in the win (previous high 37, recorded multiple times, most recently at Virginia Tech, 1/28/16). The 38 minutes matches Thomas’ mark vs. Duke (2/7/16) for the most by a Hurricane in 2015-16.
•    Hayes connected on her fourth 3-pointer of the season, giving her more this year than she had in her career entering the 2015-16 campaign.
•    Hayes scored in double figures for the 10th time this season and the third-consecutive game.
•    Thomas, who surpassed 750 points as a Hurricane, recorded double-digit points for the 18th time in 2015-16. She has tallied at least eight points in all but three of 25 contests.
•    With 12 points, Davenport tied her season best (previously recorded multiple times, most recently at Clemson, 1/10/16). Her five made field goals also matched her season high (previously recorded multiple times, most recently vs. FIU, 12/22/15).
•    Davenport’s nine first-half points are her most before the break this season (previous high seven, vs. Coppin State, 12/4/15).
•    Davenport logged double-digit points for the seventh time this season and the second time in ACC play.
•    Laura Cornelius recorded the first blocked shot of her career.