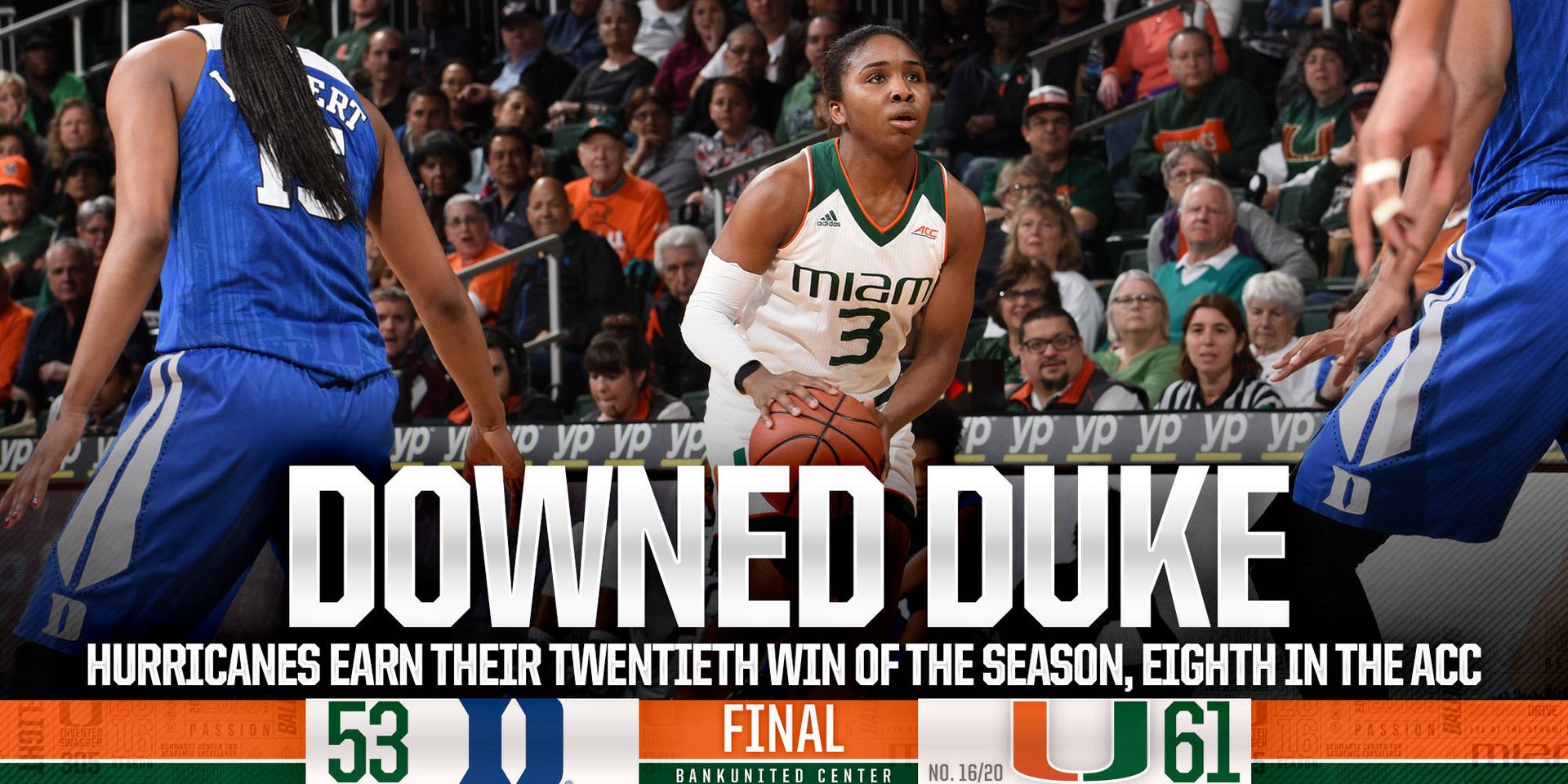 CORAL GABLES, Fla. – The University of Miami women’s basketball team limited Duke to a program record-low 11 first half points on its way to a commanding 61-53 victory over the Blue Devils Sunday at the BankUnited Center.

No. 16/20 Miami (20-4, 8-3 ACC) held Duke without a point for over 11-straight minutes and without a field goal for greater than 15-consecutive minutes during the win, which was its second all-time against the Blue Devils.

Junior guard Adrienne Motley led all scorers with 21 points, including 17 in the second half to help Miami reach 20 wins for the sixth time in seven seasons. Sophomore forward/center Erykah Davenport, making her first start since Dec. 18, 2015, pulled down a game- and career-high 15 rebounds.

“Obviously it’s one of the best defensive performances I’ve ever seen. I mean, we’ve held teams, but they weren’t Duke,” Miami head coach Katie Meier said. “We have had some amazing defensive performances in this building, but that first half was amazing. My kids were just playing their absolute ever-living guts out and we had one day to prepare.”

The Hurricanes took a 15-9 lead through one quarter of play after holding Duke (17-8, 6-5 ACC) scoreless for the final five minutes of the period. Miami’s 2-0 deficit, which lasted just 14 seconds, was the only time it trailed all game.

The stellar defense by the Hurricanes continued into the second quarter, as Miami made it 11 minutes and 37 seconds in a row it held Duke without a point until the Blue Devils connected on a free throw. During that time, the Hurricanes went on a 15-0 run to take a 24-9 lead.

Miami went on to hold Duke without a made field goal for the final 15 minutes of the half, as the Blue Devils missed 24-straight shots. The Hurricanes led 27-11 at halftime after outscoring Duke 12-2 in the second period.

The 11 points allowed in a half and two points in a quarter are both season bests for the Hurricanes.

After a 3-pointer by Motley to open the second half stretched the Hurricanes’ lead to 19, 30-11, Duke connected on its first field goal in 15 minutes and 40 seconds.

The Blue Devils went on a 14-4 run during the third period to trim their deficit to six. Motley then scored the final basket of the frame with three seconds on the clock and Miami took a 44-36 edge into the final session.

That basket by Motley sparked what would become a 12-2 Miami run to make it 54-38 with 6:37 remaining. Motley had eight of the 12 points during that span and capped it with a 3-pointer.

Duke scored 15 points in the final four minutes, but the Hurricanes continued to answer each time the Blue Devils looked to narrow the gap and they did not get any closer than seven.

“That’s what I love about this team,” Meier said of her team’s resiliency when Duke made its late pushes. “We were in that situation at Charlotte, we were in that situation at Old Dominion and against Baylor. So you go on and on in the nonconference schedule and you realize what we’ve done. It’s a different person every time. We have faith; faith is confidence with patience and we showed great faith tonight.”

Thomas finished with 13 points and game-high four assists, while connecting on a career-high-tying four 3-pointers in the victory. Redshirt junior forward Keyona Hayes added 13 points, including seven in the fourth period, to go along with seven rebounds.

Duke entered the game outrebounding its opponents by 9.3 boards per game and the Hurricanes won the rebounding battle, 48-41. Miami is just the fifth team to outrebound the Blue Devils this season and the plus-seven margin matches the most by any of the five.

“What makes it special is that my players played their guts out and they won,” Meier said of the victory over the Blue Devils. “That’s what’s special for me.”

Miami next plays the first of two-straight road games Thursday night at 7 p.m. against Georgia Tech at Hank McCamish Pavilion in Atlanta.

·         The all-time series between the Hurricanes and Blue Devils is now 12-2 in favor of Duke. The teams have split the last four meetings.

·         This is the first time in program history Miami has defeated both Duke and North Carolina in the same season.

·         Duke’s 11 first half points are the fewest it has ever scored before the break in program history.

·         The Hurricanes’ two points allowed in the second quarter is a new season best (previous low four, recorded twice, most recently in the first quarter at Clemson, 1/10/15).

·         Duke 12.1 field goal percentage and four made field in the first half are also the lowest marks in a half by a Miami opponent this season, while its two assists ties the lowest total.

·         Miami has now recorded at least 20 victories in six of the past seven seasons. Twenty wins in 24 games ties the fifth-fastest mark in program history.

·         Davenport, who eclipsed 250 rebounds in her career, also has seven-plus rebounds in four-straight games after logging at least four rebounds three previous times all season.

·         Laura Cornelius surpassed 150 points in the first year of her collegiate career.

·         Emese Hof eclipsed 50 free throws attempted in her first season as a Hurricane.