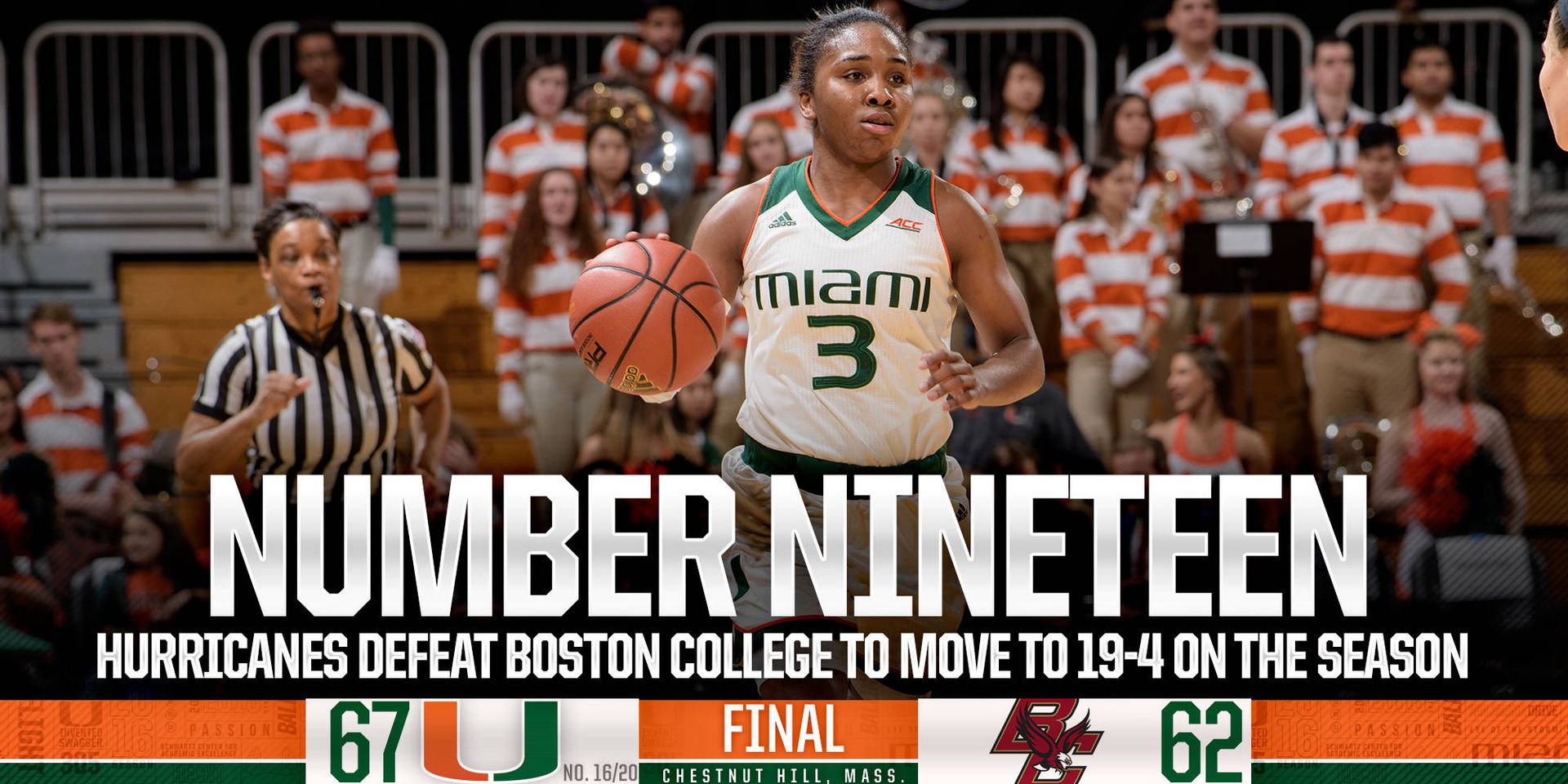 Free Throws Spark @CanesWBB to Win at BC

CHESTNUT HILL, Mass. – The University of Miami women’s basketball team stormed back from an early deficit and controlled the second half of the game en route to a 67-62 victory over Boston College Thursday night at Conte Forum.

No. 16/20 Miami (19-4, 7-3 ACC) has now earned seven victories in eight road games this season. Junior guard Jessica Thomas led the Hurricanes with 14 points and set a new career high in free throws made, shooting 8-of-9 (88.9 percent) at the line.

“We needed to get to the free throw line,” Miami head coach Katie Meier said. “In the first half we went 9-of-9. I said at halftime, ‘This is a positive thing for us. We got to get in bonus in both of the remaining quarters.’ I believe we did.”

After trailing 21-11 with 1:39 left in the first period, the Miami found its groove and dominated the remainder of the half, conceding just eight points the rest of the opening half.

The Hurricanes trailed 21-13 through one quarter, but from the final minute and 38 seconds of the period through the first four minutes and 26 seconds of the second, they did not allow a point.

Buoyed by the strong defense, Miami went on a 16-4 run, including a 10-0 stretch to close it that was capped by a 3-pointer by Adrienne Motley. The junior guard’s shot gave the Hurricanes their first lead of the game, 27-25, with 1:04 remaining in the first half.

Boston College (13-9, 1-8 ACC) scored the final four points of the second period and led 29-27 at halftime. Miami, as aforementioned, connected on all nine of its free throw attempts in the opening 20 minutes, its second-most in the first half this season. Thomas was 5-of-5 at the stripe individually before the intermission.

“She was aggressive in the first half, but we asked her to be patient in the second half,” Meier said of Thomas. “So, we went deeper in the offenses and she made the right reads. In fact, we had her out on the bench and said, ‘Did you see this?’ When she came back off of that I don’t think I took her off again because she just ran it. She saw it and she ran it.”

The Hurricanes held the Eagles to 4-of-16 shooting (25.0 percent) in the third period and built a lead of as much as nine when Laura Cornelius hit a 3-pointer with 1:57 on the clock to make it 46-37. The basket by the freshman guard capped a 13-2 run by Miami, which ended the third quarter with a 47-40 edge.

“The second quarter and the third quarter, our defense was awesome. We were a little panicked in the first quarter. Twenty-one is a lot to give up, but then we responded,” Meier said. “Really, they only had four points until the last 36 seconds of that second quarter and they scored on two shots. That was a huge adjustment and then we held on it in the third. That gave us the cushion we needed.”

Boston College closed to within a point, 49-48, with 6:33 left in the game, but Cornelius answered with a 3-pointer and Miami never looked back, holding strong for the five-point win. The Hurricanes led for the final 15 minutes and 19 seconds of the contest after being ahead for just 25 seconds in the first half.

Boston College freshman center Mariella Fasoula led all scorers with 19 points and junior guard Kelly Hughes chipped in with 12. Miami limited Hughes, the Eagles’ leading scorer, to 4-of-14 shooting (28.6 percent) from the floor, including 1-of-5 (20.0 percent) from 3-point range.

With 16 steals, the Hurricanes had twice as many as the Eagles and its second-most of the 2015-16 season. Miami also held Boston College to just 14 made field goals on 39 attempts (35.9 percent) in the final three periods of the game.

The Hurricanes will play their third game of the week Sunday at 1 p.m. against Duke back home at the BankUnited Center in Coral Gables, Fla.

·         For the 12th game in a row, Miami’s starting lineup was Hayes, Emese Hof, Motley, Thomas and Michelle Woods. This is now solely the Hurricanes’ most commonly used starting five of the season.

·         The all-time series between the Hurricanes and Eagles is now 25-17 in favor of Miami, which has won eight of the past nine meetings.

·         Prior to coming back from a 10-point deficit tonight, Miami beat Wright State and Illinois after being down by 13, Charlotte after trailing by 12 and Indiana after being behind by 11.

·         The Hurricanes held Boston College for a span of six minutes and four seconds in the first half. It is the second-straight road game Miami has held an opponent without a point for over six-consecutive minutes (previous 7:12, at Virginia Tech, 1/28/16).

·         Thomas’ eight free throws made are also the most by a Hurricane this season (previous high seven, by Adrienne Motley, at North Carolina, 1/17/16). Her nine attempts were also an individual player high (previous high eight, recorded multiple times, most recently by Emese Hof, vs. Florida State, 1/24/16).

·         With nine free throws attempted, Thomas set both a new season high and new career high in ACC competition, eclipsing her previous high of eight for both, set in the same game (vs. NC State, 12/30/15).

·         Thomas scored in double figures for the 16th time this season. She has tallied fewer than eight points just three times in 23 games.

·         Davenport posted her third-straight game with at least seven boards. She had previously recorded seven-plus rebounds three times all season, with none since 12/4/15 vs. Coppin State.

·         Khaila Prather recorded multiple blocks in a game for the first time this season.