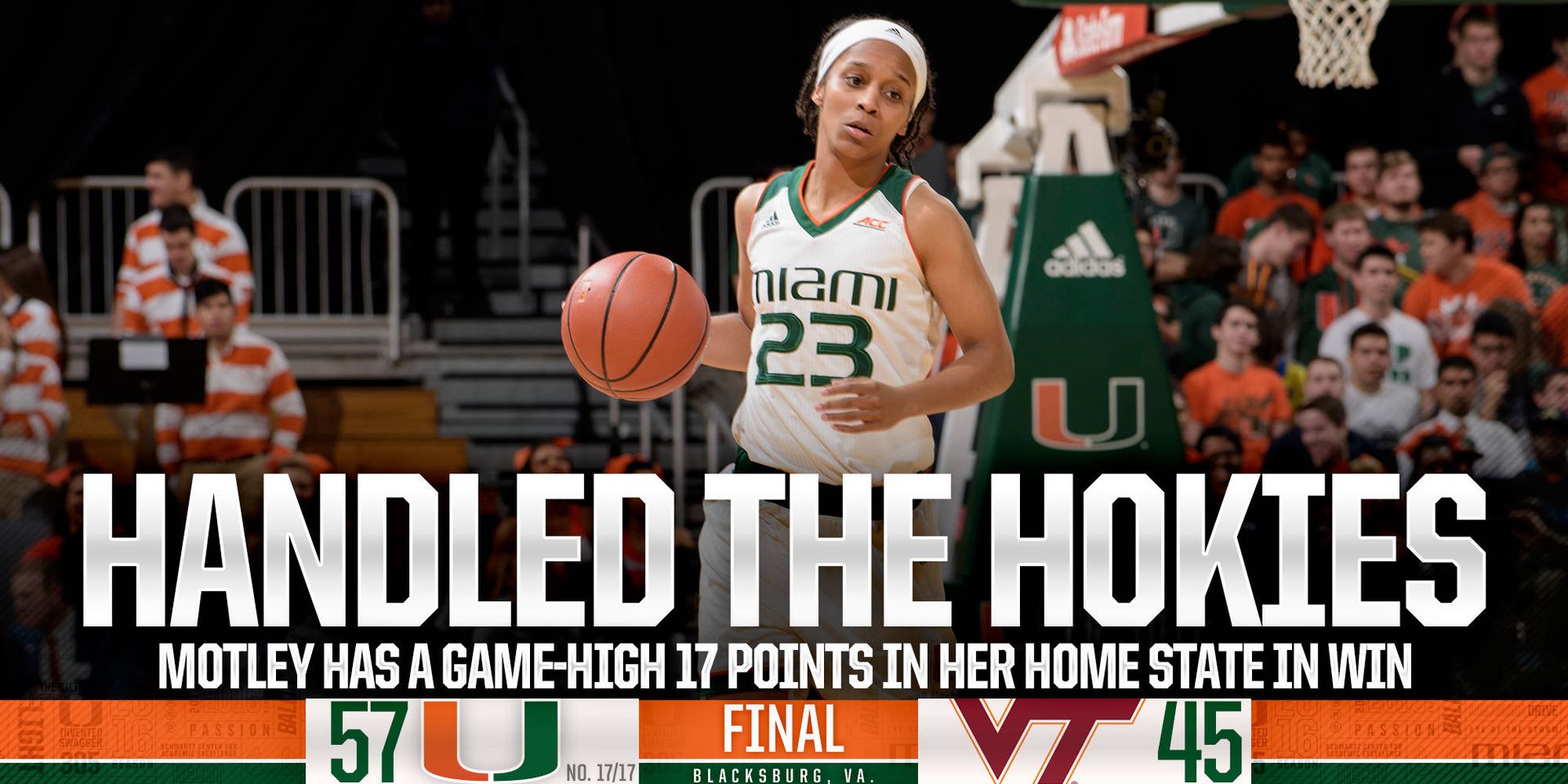 BLACKSBURG, Va. – The University of Miami women’s basketball team went on the road and came away with a win for the sixth time in seven tries this season, topping Virginia Tech 57-45 Thursday night at Cassell Coliseum.

“It just seems like every game and every team gets harder,” Miami head coach Katie Meier said of her team’s impressive road performances so far this season. “It’s just going to be so hard to get wins from here on out. We got to learn our lessons from this one and fix what we can fix.”

After trailing for much of the opening period, Miami closed it on an 8-1 run over the final 50 seconds to take a 17-13 lead. Junior guard Jessica Thomas opened the stretch with a 3-pointer and finished it off with a jump shot with just three seconds left on the clock. Sophomore forward Keyanna Harris had the other four points during the run, including a tough finish in transition for an old-fashioned 3-point play.

Miami continued its run into the second quarter, extending it to a 13-2 surge. A corner 3-pointer by Motley, making a return to her home state, capped the run and made it 22-14 Hurricanes with 7:11 left before the break.

As was the case in the first period, Miami closed the second on a run. The Hurricanes scored the last seven points and took a 36-23 edge into the intermission. The three leading scorers through 20 minutes were all Hurricanes: Motley with 11, Thomas with eight and redshirt junior forward Keyona Hayes with seven. Miami shot 51.9 percent in the first half while limiting Virginia Tech (14-6, 2-5 ACC) to a 31.0 percent clip.

The Hurricanes held Virginia Tech scoreless for the first six minutes and 54 seconds of the third period, making it a stretch of seven minutes and 12 seconds dating back to the first half Miami did not concede a point. After a low-scoring period, Miami took a nine-point lead, 40-31, lead into the final frame.

“The fact that our defense held during that offensive drought is great for us,” Meier said. “We like to score, but if we have to rely on our defense, we will.”

The Hokies scored the first nine points of the fourth quarter to make it a 17-0 run over five minutes and four seconds to even the score at 40 with 8:12 to remaining. Miami then showed its resolve, answering with a 10-1 run to go ahead 50-41 with 2:47 left on the clock.

Virginia Tech was unable to pull any closer than seven points the rest of the way and Miami went on to post its 15th win by double figures this season.

“I hated to see that lead go, but it was a span there where Virginia Tech made some great shots,” Meier said. “It wasn’t like we were making crucial mistakes. I thought we executed deeper into our offense in the last eight minutes and absolutely that’s what won the game. We really had great patience and poise.”

Redshirt freshman forward Regan Magarity led Virginia Tech with 11 points in the defeat. Miami limited the Hokies to 16-of-57 shooting (28.1 percent) on the night, including 4-of-21 (19.0 percent) from 3-point range.

The Hurricanes return home to face Syracuse Monday night at 7 p.m. at the BankUnited Center in Coral Gables, Fla.

·         The all-time series between the Hurricanes and Hokies is now 15-6 in favor of Miami, which has won nine-consecutive meetings.

·         Miami’s first points of the night came off Hayes’ third 3-pointer of the season and the sixth of her career.

·         Motley is 8-2 in her career against teams from her home state of Virginia, including 5-1 on the road and 7-1 against ACC teams. She is averaging 16.3 pointsin road games in the Old Dominion State, with three outings of 20-plus points.