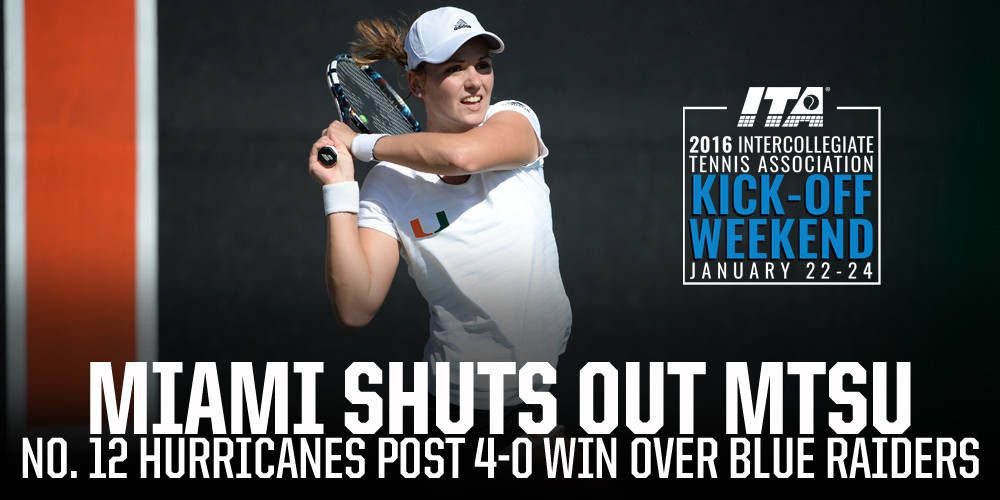 No. 12 Miami (1-0) was originally scheduled to face the Blue Raiders Friday, but it was postponed due to weather. However, the delay did not slow down the Hurricanes, as they cruised to their 122nd shutout win under the direction head coach Paige Yaroshuk-Tews, including the 65th since 2009.

The Hurricanes began play with a dominant showing in doubles action, winning all three matches in a span of under a minute. The last two ended just seconds part, as both were at match point simultaneously.

“We’re focusing on our doubles a lot this year,” Yaroshuk-Tews said. “We know that if we get that point, we can beat any team in the country. It’s really been a focus of ours. Doubles today took 32 minutes with changeovers and breaks. So, you’re talking maybe a little over 20 minutes to decide 25 percent of the points you need to win a match. You need to be ready to go, you need to be on your toes quick and they were. So, I was happy.”

With the final point already started, sophomore Wendy Zhang and senior Stephanie Wagner finished out their match and earned a 6-2 win over Brittany Huxley and Giulia Squadrin.

The Hurricanes continued their stellar play in singles, with Fuentes and No. 80 Zhang quickly increasing the score to 3-0. Fuentes did not drop a single game, topping Magazzini, 6-0, 6-0, and Zhang rolled past Squadrin, 6-1, 6-2.

Of the four remaining matches, Miami was a game away from winning in three of them, but it was ultimately Wagner, ranked ninth in the country, who sealed the deal. After falling behind 0-2 in the first set, Wagner won 12 of the final 15 games for a 6-3, 6-2 victory and the 115th singles win of her career.

Lohan, ranked seventh nationally, had her match end with a 6-0, 6-5 lead, as she won three-straight games in the second set after Huxley had taken a 5-3 edge. In her first-career singles dual match, Madcur impressed with a 6-2, 5-1, unfinished result against Sediri. In addition, Riobueno led Zirilli 6-1, 3-3 when it was abandoned.

“It was pretty windy today, but I think that the girls didn’t get too caught up in the conditions,” Yaroshuk-Tews said. “I think that they focused on their games and they did what they needed to do. They were working on things and they were playing aggressively. I think we’re doing a really good job of handling the deuce points, especially down low at like the five [Madcur] and six [Fuentes] positions. You’ve got to have pretty thick skin to get through deuce points and the girls are doing it.”

Sunday at 11 a.m., Miami will face No. 41 Auburn and the winner will receive a bid to the ITA National Team Indoor Championship in Madison, Wis., Feb. 5-8.

Entry to the ITA Kick-Off Weekend is free to all fans. Live stats for all of the matches will be available HERE.