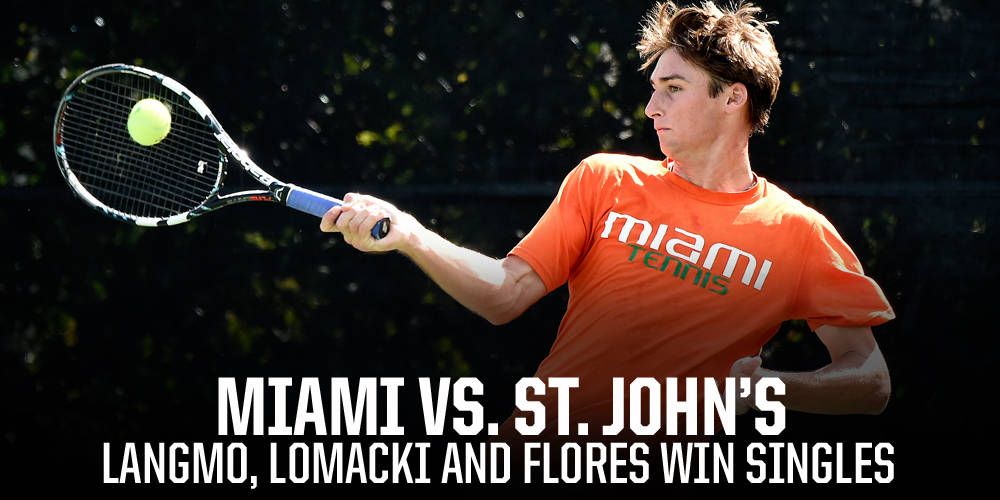 Coral Gables, Fla. – The Miami Hurricanes men’s tennis team dropped their season opener, 4-3 , in their match up against St. John’s University on Saturday at the Neil Schiff Tennis Center.

“It was tight being our first match and being down a point because of the doubles,” said head coach Mario Rincon. “Little by little we started playing better, we started making some shots but it wasn’t enough.”

The evening started with doubles play where the Canes found some success. Sophomore Piotr Lomacki and junior Max Andrews were defeated by Vaidik Munshaw and Lucas Hejhal, 6-2. Sophomore Christian Langmo and junior Jesse Flores were able to develop a consistent rhythm outscoring Daniel Skripnik and Roberto Livi,  6-4. At the No. 3 doubles, sophomore Kevin Bondar and junior Bernard Tefel fell to Dusan Vukicevic and Andrei Crepcenco, 6-3.

In singles action the Canes attempted to pick up the pace from doubles play, but fell short. At the top singles spot, #23 Lomacki overpowered #56 Hejhal to clinch the win, 6-3, 6-4.  Following the number one spot was #70 Langmo, who battled in a thrilling three-set match to take the victory over Skripnik, 5-7, 5-7, 6-4. Andrews came up short against Livi, falling 6-3, 6-1 at the third position.

“Hopefully our guys understand that they’ve got to be ready from the get-go,” said Rincon. “We have FAU tomorrow and we’ve got to get over this loss quickly and learn from it.”

The Canes return to the Neil Schiff Tennis Center Sunday, January 17 at 2 p.m. when they take on FAU for the second match in their spring 2016 slate.