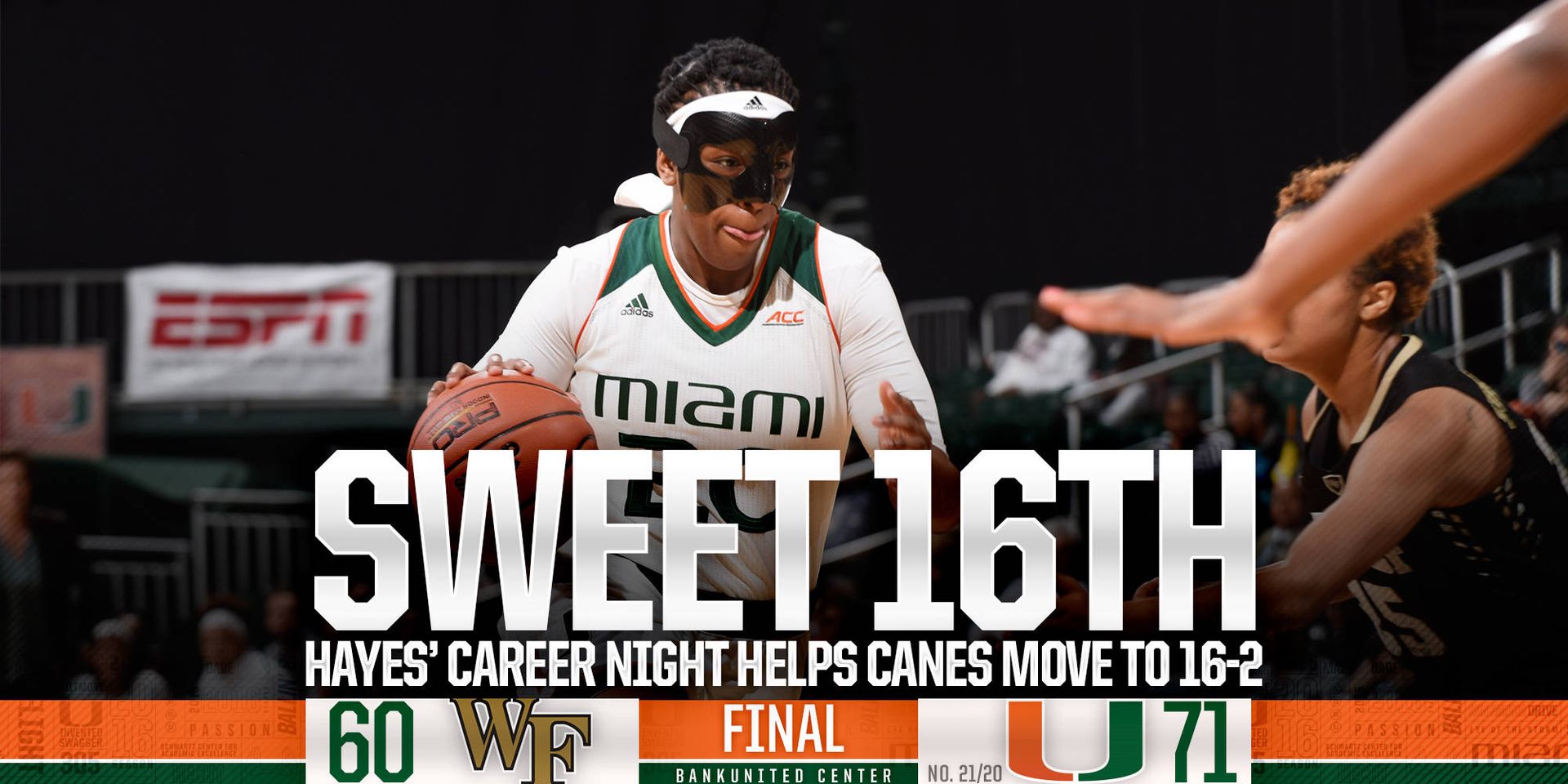 The redshirt junior had 11 points in each half and finished the game 8-of-10 from the field and 6-of-7 at the free throw line. She also pulled down a team-high six rebounds and matched her career best with a co-game-high three steals.

“She was awesome tonight and was steady-eddie,” Miami head coach Katie Meier said of Hayes. “We all know what Key is capable of. I think this was a physical game and we needed Key to come through. She’s just so reliable, so reliable. That was a great performance.”

Miami connected on a trio of 3-pointers during the second quarter. Junior guard Jessica Thomas hit the first two and her initial one gave the Hurricanes their largest lead of the opening half at 26-15 with 6:06 to go before the break.

Redshirt senior guard Michelle Woods capped the first half scoring with the team’s third and final 3-pointer of the session, putting Miami ahead 37-29 at halftime. Hayes had a game-high 11 points at the break, her most points in a half this season.

The Hurricanes, who made their final three shots before the intermission, forced Wake Forest into 15 turnovers in the first 20 minutes, which led to 18 of Miami’s 37 points. In the first quarter alone, Miami had a 10-0 edge in points off turnovers.

The Demon Deacons opened the second half on an 8-0 run to tie the score at 37, but Thomas quickly answered with a basket to give Miami the lead back. From there, Hayes and junior guard Adrienne Motley took over for the rest of the third quarter, splitting Miami’s final 14 points of the frame. The Hurricanes closed the period on a 16-7 run and led 53-44 entering the final session.

Wake Forest was unable to pull within any more than seven points in the fourth period and Miami held strong for the 11-point victory, the team’s 13th win by double figures this season.

“We need to be thrilled with any ACC win we get from here on out,” Meier said, “just thrilled. We need to take them.”

Along with Hayes’ game-high 22 points, Motley posted 18 points, her third-straight outing with at least that many. Thomas chipped in 12 points and a co-game-high five assists in a career-high-tying 37 minutes of action.

The Hurricanes forced 24 turnovers in the victory, marking the third-consecutive game they forced at least 20.

Miami returns to the court at North Carolina this weekend when the Hurricanes play their third-straight Sunday road game. The contest is set for 12:30 p.m. at Carmichael Arena in Chapel Hill, N.C.

To keep up-to-date with the latest news on the University of Miami women’s basketball program, follow @CanesWBB.

·         The all-time series between the Hurricanes and Demon Deacons is now 9-8 in favor of Miami. Over the last eight meetings, Miami is 6-2.

·         Hayes’ 22 points tied her career high (previously recorded multiple times, most recently at Virginia, 2/27/14). It is the fourth 20-point outing of her career and first since the 22-point outing against Virginia.

·         With five assists in the game, Laura Cornelius surpassed 50 assists in her first season at Miami. Additional, her total matched her career best (previously recorded multiple times, most recently vs. Pittsburgh, 1/7/16).