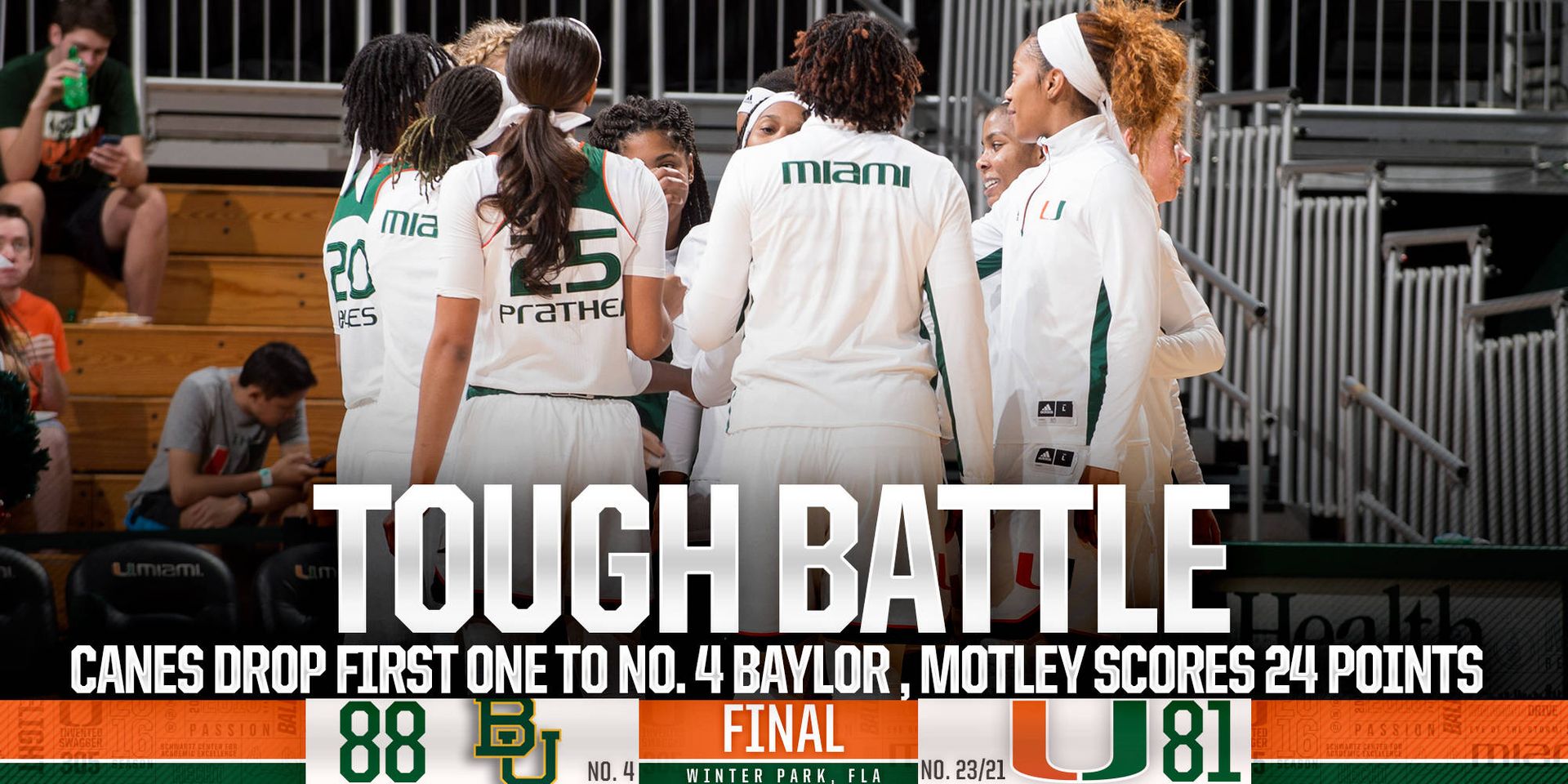 WINTER PARK, Fla. – The University of Miami women’s basketball team dropped its first game of the season Saturday night, falling 88-81 to fourth-ranked Baylor at Warden Arena on the campus of Rollins College.

In a frenetic game from start to finish, No. 23/21 Miami (10-1) was led by a season-high-tying 24 points by junior guard Adrienne Motley, who connected on a career-high five 3-pointers in the Florida Sunshine Classic opener.

“It’s not unexpected,” Miami head coach Katie Meier said of the way her team performed.” I feel like we’re a really special team and we can solve a lot of problems, but obviously the one that we didn’t solve was the rebounding. I’m not the only coach who [after a game against] Baylor is saying, ‘I wish we would’ve done a better job on the boards.’ Everyone they play this year is going to say that.We are who we are, they are who they are. Their identity won it in the end, but given a chance to play again, these two teams are pretty evenly matched based on our strengths versus our weaknesses.”

The Hurricanes and Lady Bears went back-and-forth to open the game before Miami started to get hot offensively and clamp down at the other. A 7-0 run in under a minute, capped by a 3-pointer by Motley, made it 18-11 Hurricanes with 3:04 left in the first period.

Miami held Baylor (12-0) to two makes on its final 12 attempts of the quarter and had a 23-16 advantage through 10 minutes behind seven points from redshirt junior forward Keyona Hayes.

The Lady Bears’ offense picked up in the second quarter, as they more than doubled their score in the first five minutes of the frame, grabbing a 33-31 lead with 5:10 on the clock. However, Miami stormed right back and a 3-pointer by Motley put the Hurricanes in front by four, 41-37, with 3:01 to go before the break.

Baylor would go on to take a one-point edge into the intermission, as freshman center Kalani Brown scored on a putback basket with two seconds on the clock, making it 45-44. Miami, paced by 11 points from Motley, shot 16-of-30 (53.5 percent) in the opening 20 minutes.

The Lady Bears, behind All-American junior forward Nina Davis’ 15 points, was also superb from the field, connecting on 20-of-43 (46.5 percent) attempts. The Hurricanes held senior guard Niya Johnson, the nation’s leader in assists, without an assist before the break.

The fast-paced, back-and-forth action continued in the third period. Motley scored eight points in the frame for Miami, as did Baylor redshirt junior guard Alexis Jones and junior center Kristina Higgins, who hit a jump shot at the buzzer to make it 67-62 Lady Bears through 30 minutes.

Miami would not relent, as junior guard Jessica Thomas scored five-straight points to make it 84-79 with 49.7 seconds left. However, the Hurricanes could not pull any closer and the Lady Bears held on for the seven-point victory.

Along with Motley’s 24 points on 9-of-16 shooting (56.3 percent), Thomas added a season-high 18 points on 7-of-14 shooting (50 percent) and matched her season best with six assists. Redshirt senior guard Michelle Woods chipped in 10 points in the narrow defeat.

“Our guards were going to have a score a lot, we knew that going in,” Meier said of her starting backcourt logging 52 points. “So, it was exactly to the game plan there. We’ve got to hit our free throw and we’ve got to get five more defensive rebounds and we win that game, but I’d play it again tomorrow. It was a lot of fun.”

Baylor’s Davis led all scorers with 25 points, while Jones had 24 for the Lady Bears. Higgins posted a double-double with 13 points and 11 rebounds. Miami held Johnson to just four assists on the evening.

The Hurricanes will conclude play in the Florida Sunshine Classic Sunday night at 7:15 p.m. against Indiana.

·         As has been the case in all 11 games this season, Miami’s starting lineup was Erykah Davenport, Hayes, Motley, Thomas and Woods.

·         The Hurricanes and Lady Bears entered the day as just two of the 13 remaining undefeated teams in Division I.

·         The Hurricanes’ first points of the night came off a 3-pointer by Hayes, her first make from beyond the arc this season.

·         Thomas also logged double-digit points for the seventh time this season, including the fourth time in the last five contests.