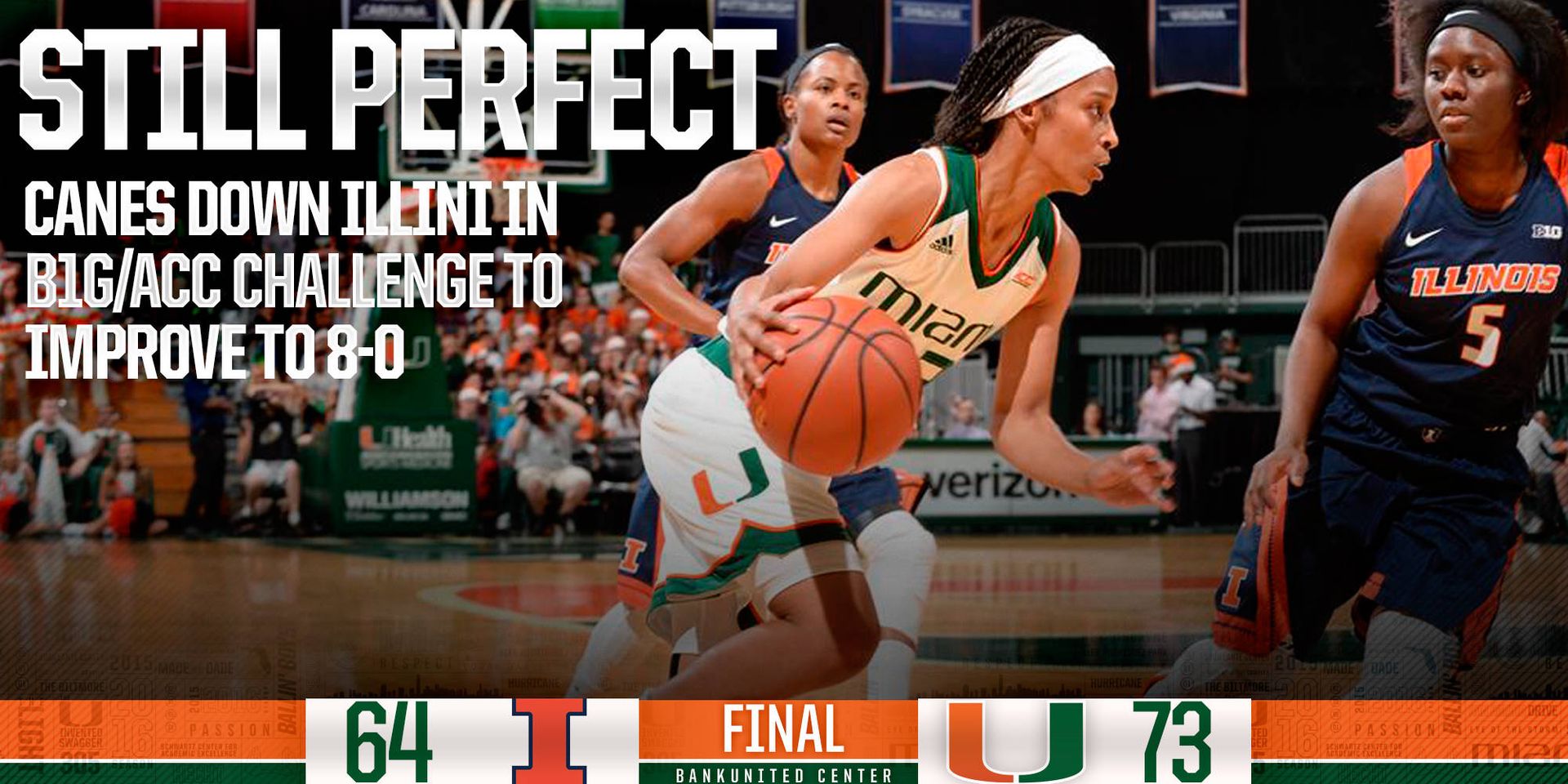 CORAL GABLES, Fla. – After trailing Illinois for much of the game Wednesday night, the University of Miami women’s basketball team used a 16-0 fourth period run to turn an eight-point deficit into an eight-point lead, en route to a 73-64 victory.

Led by a game- and season-high 24 points, including 16 in the second half, by junior guard Adrienne Motley, Miami (8-0) earned its fourth Big Ten/ACC Challenge win in the last five years. The Hurricanes have now won their first eight games of the season for the second time ever.

“First of all, Illinois hit just some really great shots, but then in the first half, we had a lot of unforced errors. We played uncharacteristically sloppy,” Miami head coach Katie Meier said of her team’s play in a game that saw runs back-and-forth throughout. “In the second half, when they went on their run, they earned it. They were very efficient, so we had to amp up the defense. My team did not panic. There were no adjustments to make. It was just, ‘Believe in yourselves, we got this.’ [It was a] different message than the halftime message, for sure.”

Illinois (4-1) jumped out to a 9-0 lead in the first two minutes and 12 seconds of the game. However, the Hurricanes quickly responded, scoring 11-straight points to take the lead at the 5:10 mark, fewer than three minutes later. After a frenetic first period, Illinois held a 21-18 edge behind nine points from freshman guard Cierra Rice, including a jump shot to beat the buzzer.

The Fighting Illini opened the second quarter in similar fashion to the first, scoring 10-straight points to go ahead 31-18 with 8:03 left before the break. Once again, Miami bounced back in a hurry, posting a 10-2 run to cut the deficit to five. Another buzzer beater by Rice made it 35-28 in favor of the Fighting Illini at the intermission.

Illinois stretched its lead back up to nine, 52-43, with 1:57 to go in the third period, but yet again the Hurricanes countered. A 6-0 run in the next 70 seconds cut the deficit to three and it would remain that way when the horn sounded, with the score 52-49 entering the fourth period.

The Fighting Illini scored the first five points of the final session to go up 57-49 with 8:57 remaining. Then, Miami took over the rest of the way.

The Hurricanes scored 16-straight points, including seven by Motley, in a span of four minutes and 27 seconds, surging to a 65-57 edge with 4:21 to go. A 3-pointer by Motley with 6:12 gave Miami its first lead since there was 3:24 left in the first period, sending the crowd, which included a record student turnout, into a frenzy. Junior guard Jessica Thomas, who had five of the 16 points, then connected on a 3-pointer on the next possession.

“I think I just cheered the whole time,” Meier, with a hint of a smile, said of the run. “I saw really great passing. [We had some] unbelievably unselfish play [with a] very high-level IQ.”

Miami, which trailed by as much as 13, would not concede the lead the rest of the way and made all four of its free throws in the final minute, two by Thomas and two by redshirt senior guard Michelle Woods.

In addition to Motley’s 24 points on 11-of-18 shooting (61.1 percent), Thomas posted 15 points and Hof added 13. Woods equaled her career best with a game-high eight rebounds and Thomas matched her career high with a co-game-high five steals.

“I think Erykah [Davenport] and Emese took it real personally. We did not have a ton of time to prepare, but they took it very personally and they are known for their ability to defend,” Meier said of the Hurricanes limiting White. “Frankly, we tried to push the defense away from the basket. The whole team defended her because we were pressing and trying to keep her away from the basket.”

Rice paced Illinois with 22 points and redshirt senior guard Kayley Simmons chipped in with 10 in the defeat.

The Hurricanes will return to the court Friday at 7 p.m. when they host Coppin State at the BankUnited Center.

·         This is Miami’s first-ever win over Illinois and the Hurricanes now the trail the all-time series 2-1.

·         Miami and Illinois entered the game as two of just 27 remaining undefeated teams in Division I.

·         The Hurricanes held Chatrice White, Illinois’ leading scorer at 20.3 points per game, without a single point for the first 28 minutes of the game.

·         Hof has scored six-plus points in seven of the first eight games of her career, including 11-plus in four.

·         Motley has posted 13-plus points in seven of eight games this season, including each of the past six. She has scored 17-plus points in half of Miami’s outings.

·         One of 24 players with 1,000 points in program history, Motley moved into 21st place on the all-time scoring list, passing Renee Taylor, Meghan Saake and Cassaundra Wimes. Motley now has 1,036 points.

·         In addition, Thomas logged multiple blocked shots for the first time in her career and her five steals tied her career high (previous vs. Florida A&M, 12/28/14). She is the first Hurricane with five steals in a game since Motley did so last season vs. Boston College (1/4/15).

·         Hof became the first Hurricane to foul out of a game this season, picking up her fifth foul with 29.5 seconds left.