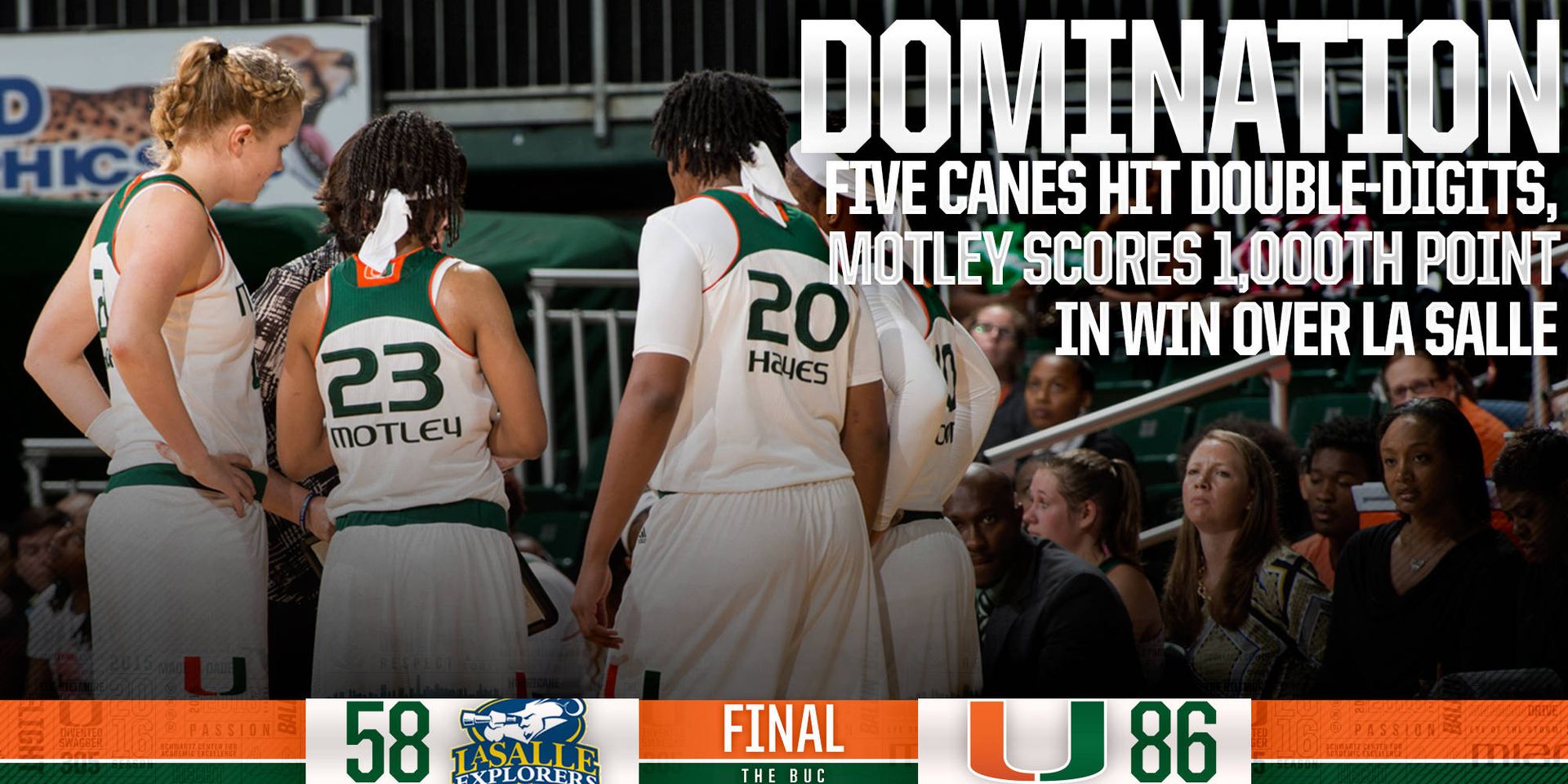 The junior guard from Newport News, Va. became the 24th player in Miami (7-0) program history to reach quadruple digits and 13th to do so in fewer than four seasons.

“I think people are missing the fact that this year she is really giving a very balanced stat sheet . . . We’ll talk about her thousandth point, but she was a scorer her freshman and sophomore year,” Miami head coach Katie Meier said of Motley. “She is a big-time basketball player now. She has a thousand points but I want to talk about some other categories too because she is really deserving of being discussed [as more than just as pull-up jump shooter], and I’m really proud of her for it.”

Motley reached the 1,000-point milestone just 4:37 into the game on a tough bucket in the paint, drawing a standing ovation from the crowd at the BUC. Her 3-pointer just over two minutes later gave the Hurricanes a 12-10 lead. A back and forth first period would end with a 16-15 advantage for the Hurricanes.

Miami opened the second period on a 10-0 run to take their first double-digit lead, 26-15, with 7:15 to go before the break. Redshirt junior forward Keyona Hayes and freshman forward/center Emese Hof combined to log eight of the Hurricanes’ points during the stretch, with each recording four.

A 3-pointer by junior guard Jessica Thomas to beat the halftime buzzer put Miami in front 46-25 heading to the locker room.

The Hurricanes set a season high with 30 points in the second period and for the first half as a whole shot a sizzling 19-of-33 (57.6 percent) from the field and 6-of-9 (66.7 percent) from beyond the arc. Five Miami players had at least a half dozen points in the opening 20 minutes, led by Hof and Thomas with eight apiece.

Miami took its first 30-point lead on a layup by redshirt senior guard Michelle Woods with 7:48 left in the third period, drawing a La Salle (0-6) timeout with the Hurricanes ahead 57-27. Miami’s advantage would not dip below 26 the rest of the quarter and the team led 70-38 entering the fourth period.

The Hurricanes kept their lead at 30-plus the whole fourth period until the final basket from La Salle made it a 28-point final.

Five Hurricanes scored in double figures, led by 17 from Woods, who shot 3-of-4 from 3-point range. Motley finished with 14, while Hof, Thomas and sophomore forward/center Erykah Davenport all added 12.

Motley and Woods each set or tied season highs with a game-high seven rebounds apiece, while Davenport and Hof each logged a career- and game-high four steals. The Hurricanes forced the Explorers into 26 turnovers and led 40-18 in points off turnovers in the victory.

“We can play with a ton of energy,” Meier said of the tenacious defense. “The only time I really subbed in the first quarter was when someone did not make a rotation. I didn’t worry about missed shots or turnovers as much, but if you’re not going to hustle back and make rotation, we can’t afford that. We’re going to come after people but we are going to give them too many layups in the back end.”

Miami will begin a stretch of three home games in five days Wednesday when it welcomes Illinois to the BUC for the Big Ten/ACC Challenge. The game is scheduled for 7 p.m.

·         As has been the case in all seven games this season, Miami’s starting lineup consisted of Davenport, Hayes, Motley, Thomas and Woods.

·         Hof scored double figures for the third time in the last four games. She has scored at least eight points in six of seven games.