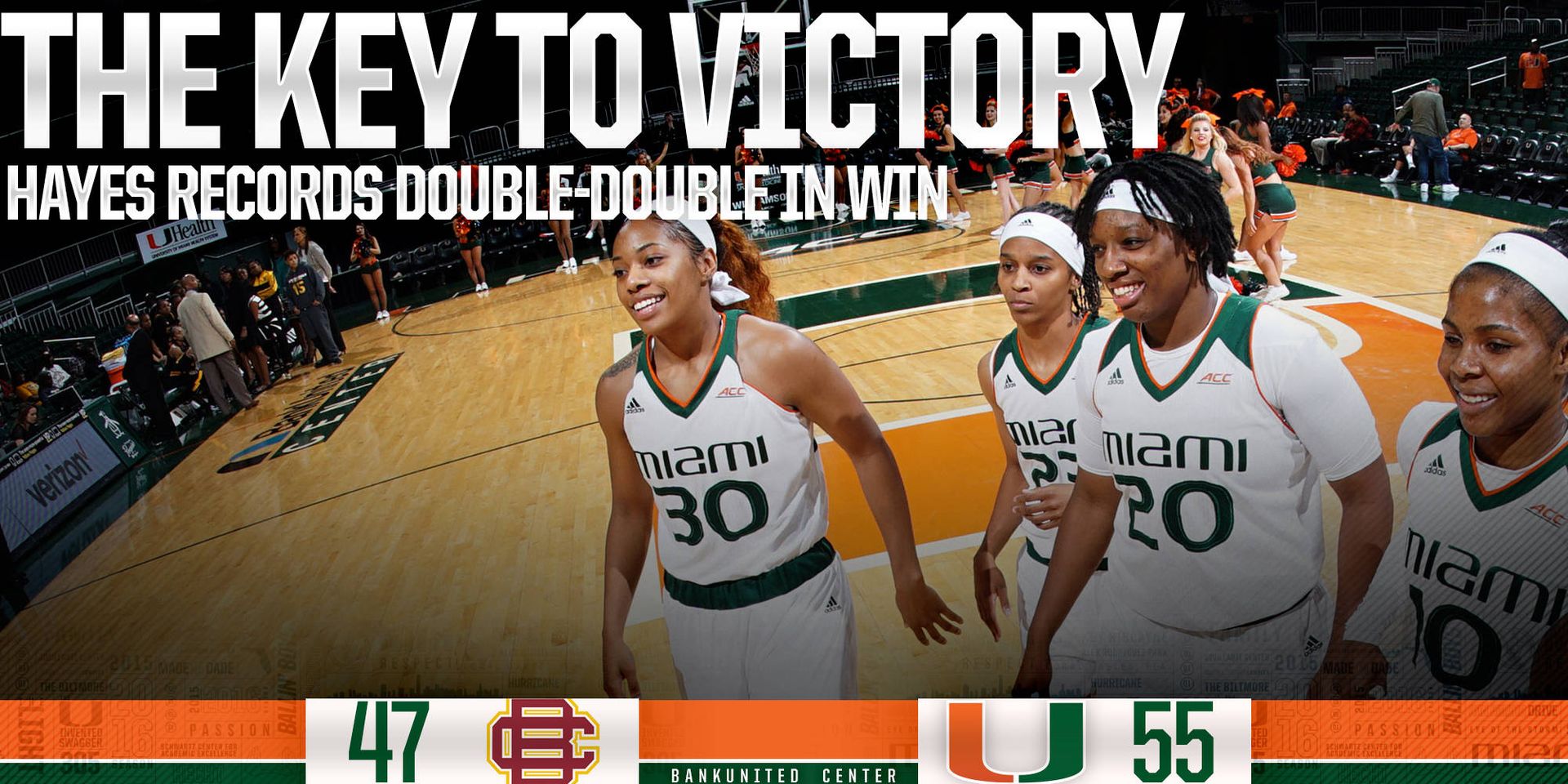 CORAL GABLES, Fla. – Led by the sharpshooting of Michelle Woods, the University of Miami women’s basketball team took down Bethune-Cookman 55-47 Sunday at the BankUnited Center.

Woods, a redshirt senior guard scored 12 points in the third quarter, all off 3-pointers, and finished with a game-high 17 points in the Miami (2-0) victory. Redshirt junior forward Keyona Hayes also tallied her ninth-career double-double, logging 12 points and a game-high 11 rebounds.

“Bethune did a great job,” Miami head coach Katie Meier said. “They played with way more energy than we did. So, when you get lessons in a win that’s a good day.”

Bethune-Cookman (0-2) came out strong to open the game and led 16-11 after one quarter of play. The Wildcats shot 4-of-5 from 3-point range in the opening period, the last make coming from sophomore forward Lyndsey Edwards just before the buzzer sounded.

Following a low-scoring second quarter, the Wildcats retained the edge and went into the locker room ahead 21-19. The three leading scorers at the break all had six points, including Miami redshirt junior forward Keyona Hayes, who made all three of her shot attempts in the opening 20 minutes.

Woods took over for the Hurricanes in the third quarter, shooting them into a lead they would not relinquish. After the Wildcats scored the first two points of the period, Woods knocked down three-straight 3-pointers in a minute and three seconds to put Miami ahead 28-23 with 7:50 left in the frame.

The Naples, Fla. native hit a fourth 3-pointer of the period to give the Hurricanes their first lead of double figures, 33-23, with 6:27 on the clock. Bethune-Cookman responded with an 8-0 run to slice the lead to two with 2:49 left in the period, but sophomore forward Erykah Davenport quickly countered with three-consecutive baskets for Miami to stretch the lead back to eight.

When the frantic third quarter finally came to an end, the Hurricanes held a 39-33 edge, scoring more points in the period than they did in the first half.

“Michelle has really been working on her shot and she’s been real consistent,” Meier said. “The more surprising thing was the first and second quarter, honestly. She was, in all of our drills, hitting shots at a high percentage. In scrimmages and games and exhibition games she’s been hitting shots, so I wasn’t surprised at the third quarter. I was surprised at the first and second.”

The Wildcats were unable to get it back to a one-possession game in the final quarter and Miami stretched its lead out to as much as 12 en route to the eight-point win.

Miami will begin its road slate Tuesday when it faces Old Dominion at 7 p.m. at the Ted Constant Center in Norfolk, Va.