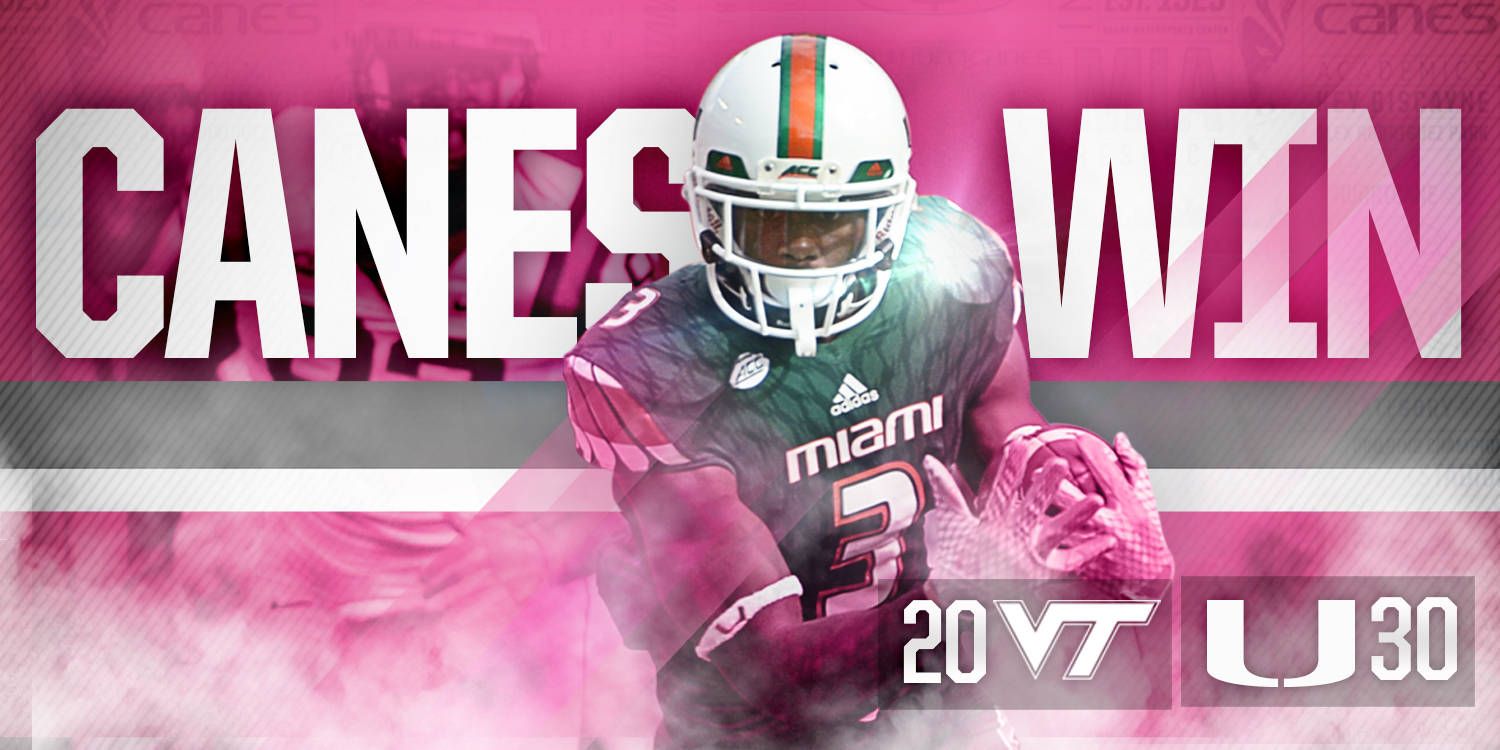 MIAMI GARDENS, Fla. (AP) – When an offsides penalty gave Brad Kaaya a free play, he cashed in with a long completion to help the Miami Hurricanes beat Virginia Tech.

The 45-yard gain led to the touchdown that put the Hurricanes ahead to stay. Kaaya also directed a 75-yard touchdown drive in the final minutes of Saturday’s 30-20 win.

Kaaya finished 19 for 30 for 296 yards. His pivotal completion came with the score tied, Miami at its own 11-yard line and 42 seconds left in the first half.

The Hurricanes were trying to run out the clock, but on third and 20, Virginia Tech jumped offsides. The Hurricanes took advantage by switching to deep pass.

“Brad is really sharp with that,” coach Al Golden said.

Kaaya hit Herb Waters for a gain to the Tech 44, and Miami went on to score with four seconds left in the half.

“That’s a game-changer right there,” Kaaya said. “It changed momentum. I think it changed the outcome.”

Miami (4-2, 1-1 Atlantic Coast Conference) bounced back from a loss a week earlier at Florida State and beat the Hokies (3-4, 1-2) for the second year in a row. The Hurricanes are hoping for a rematch with the Seminoles in the ACC title game in December.

“We preached we can’t worry about last week,” Kaaya said. “We want to see Florida State again. To do that, we have to handle business.”

“We played great on defense,” end Chad Thomas said. “We were greedy.”

After Tech scored a touchdown to cut Miami’s lead to 23-20 midway through the fourth quarter, Kaaya led a nine-play drive and capped it by throwing a 2-yard touchdown pass to Rashawn Scott with 2:44 to go.

Artie Burns then sealed the victory with his second interception of the game. The Hurricanes committed no turnovers.

“We made too many mistakes, gave them too much,” Hokies coach Frank Beamer said.

Beamer second-guessed himself for deploying an aggressive defense at the end of the first half, when Miami went the length of the field to score on Kaaya’s 7-yard pass to Scott.

“If I have to do it over, I play before the half different,” Beamer said.

Motley went 14 for 23 for 136 yards. He was replaced midway through the second half by Michael Brewer, who played for the first time since he broke his left collarbone in Tech’s season-opening loss to No. 1 Ohio State.

Brewer threw a 33-yard touchdown pass to Isaiah Ford before the Hurricanes answered with their final touchdown drive.

“Unfortunately it wasn’t enough,” Brewer said. “But it was nice to get out there and get my feet wet a little bit.”

Miami played the last 20 minutes without middle linebacker Raphael Kirby, who was carted to the locker room with a right knee injury. His replacement, sophomore Juwon Young, had an interception and a tackle for a loss.

“I’ve been kind of down, waiting for my chance, and today I got it,” Young said. “It made me feel good my preparation paid off.”

Hurricanes sophomore Michael Badgley made a career-long 49-yard field goal, and was also successful from 24 and 21 yards.

The Hurricanes are at home next Saturday against No. 5 Clemson.

“That’s a good team,” Kaaya said. “They’ve got dudes across the board. We’ve got some dudes too.”