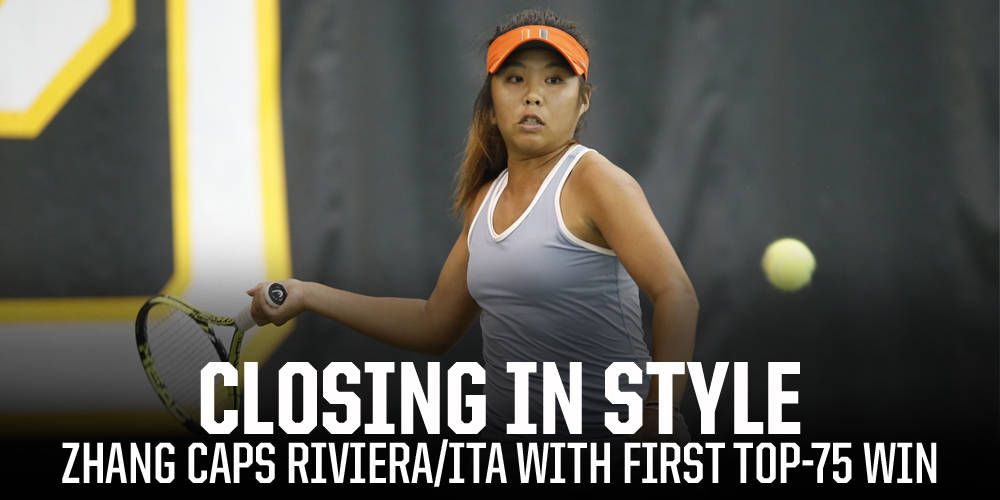 Zhang Downs No. 68 Hardebeck in California

After both split their matches Tuesday to end up in round two of the qualifying singles back draw, Zhang finished her trip to the Golden State by picking up her second-career win against a ranked opponent.

The sophomore won in straight sets, 6-2, 6-4, over No. 68 Krista Hardeback of Stanford at the Riviera Tennis Club, giving her, her first top-75 victory.

“Wendy did exactly what she was asked this weekend,” Miami associate head coach Laura Vallverdu said. “She came up a little bit short unfortunately in the first round, but she recovered quick and had two good wins. She is moving forward at a nice pace.”

Riobueno, a senior ranked No. 63 nationally, also faced a ranked opponent in Auburn’s Pleun Burgmans, who checks in at No. 47 in the country. Riobueno won the first set, but Burgmans charged back for a 2-6, 6-2, 6-3 victory.

The singles main draw gets underway Thursday and a pair of Hurricanes will be taking the court. Senior Stephanie Wagner, ranked sixth and seeded fifth, is set to face Pepperdine’s Luisa Stefani, who was seeded No. 9-16 in pre-qualifying and advanced all the way to the main draw.

Sophomore Sinead Lohan, ranked No. 13, will meet Virginia’s Julia Elbaba, who is ranked third and seeded second.  Lohan and Wagner’s matches are both scheduled for 4:45 p.m. ET.