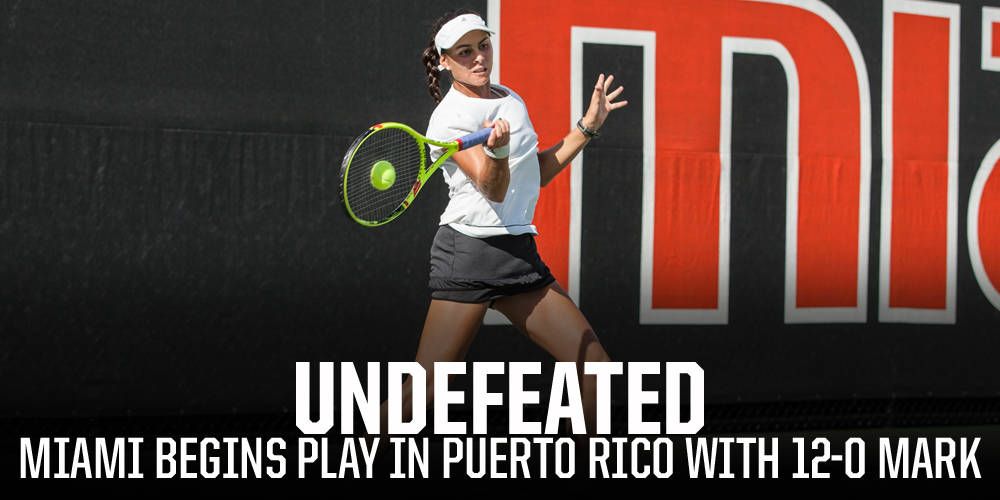 W. Tennis Unbeaten on Day One in Puerto Rico

SAN JUAN, Puerto Rico – The University of Miami women’s tennis team started its first-ever competition outside the continental United States by recording a perfect mark on the opening day.

The Hurricanes won all of their singles and doubles matches Friday at the Puerto Rico College Challenge at Surfside Las Palmas del Mar Resort.

The day began with four doubles matches between duos from Miami and Mercer. Seniors Clementina Riobueno and Stephanie Wagner paired up for the second time in their careers and downed Xandra Fougner and Katie Sidor, 6-1.

In singles play, the Hurricanes did not so much as lose a set in any of their eight matches against Bears players and conceded greater than two games in just two of the 16 sets played. Three Miami players dropped only one game.

Tanielian and No. 73 Zhang both won their matches 6-0, 6-2, with the former defeating Klyachkin and the latter taking down Sidor.

After recording the unblemished 12-0 overall mark Friday, Miami will be back on the courts Saturday at 8:00 a.m. with a trio of doubles matches and then six singles matches against players from Georgia.

To learn more about the University of Miami women’s tennis team, follow @HurricaneTennis.