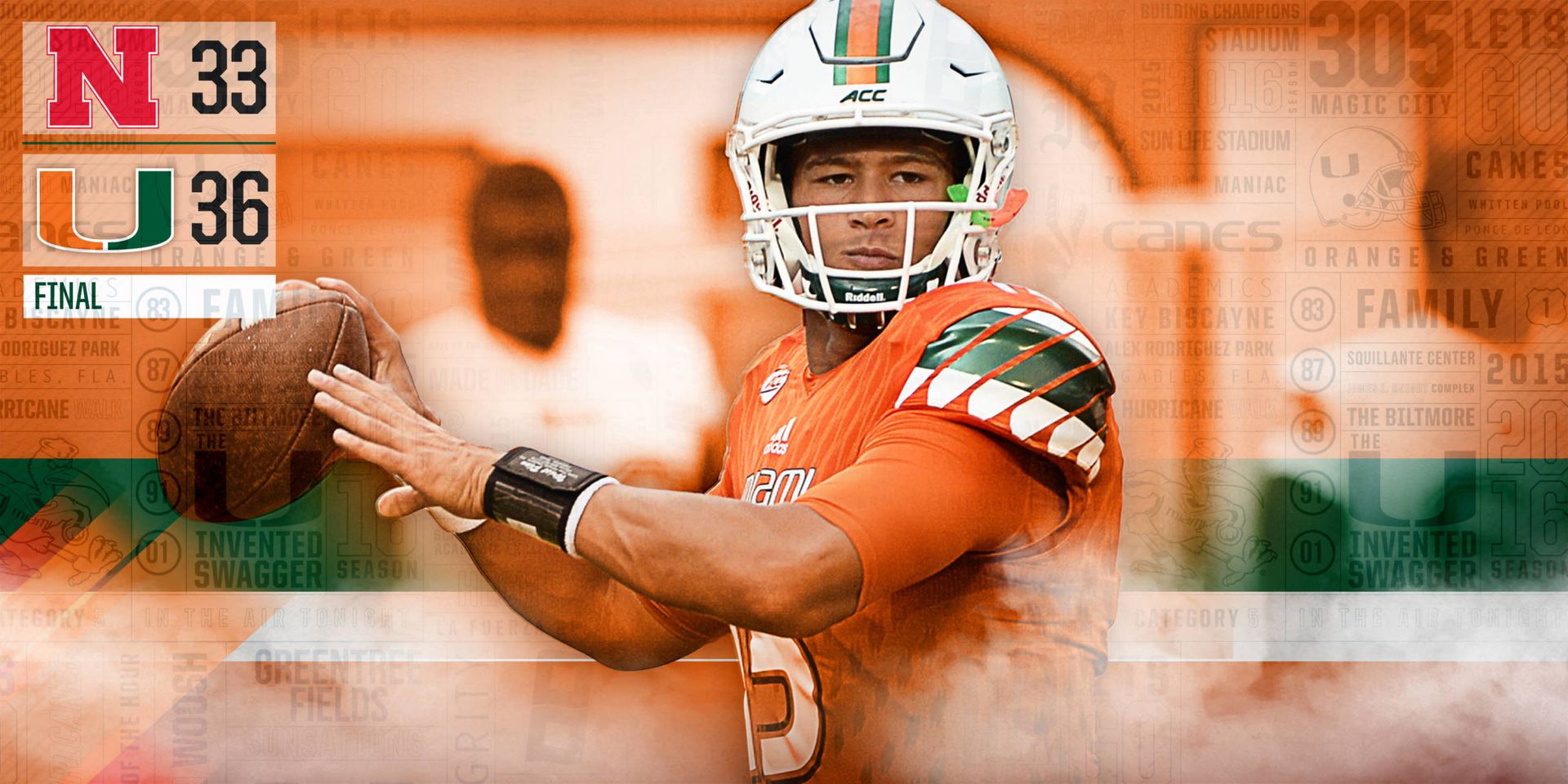 MIAMI GARDENS, Fla. (AP) – In what was supposed to be their first big test of the season, Brad Kaaya and the Miami Hurricanes passed.

Barely passed, that is.

The Hurricanes got an interception from Corn Elder on the first Nebraska play of overtime and beat the Cornhuskers 36-33 on Saturday. Kaaya threw for 379 yards and two touchdowns for Miami (3-0), while Joe Yearby ran for 125 yards and a score and Michael Badgley kicked five field goals — including the game-winning 28-yarder in OT.

Nebraska was down 33-10 midway through the fourth quarter before everything started going right for the Cornhuskers.

Tommy Armstrong threw three of his four touchdown passes to engineer that comeback, the last of those scores being an 8-yarder to Stanley Morgan with 33 seconds remaining. The Hurricanes had safeties Deon Bush and Jamal Carter ejected for targeting in the fourth quarter and Armstrong took advantage, routinely finding wide-open receivers in the final minutes.

It still wasn’t enough for Nebraska, which fell to 1-2 for just the second time since 1960 — with 1981 being the only other instance.

Christopher Herndon and Tyre Brady had their first career touchdown catches in the first quarter as Miami raced to a 17-0 lead. Rashawn Scott finished with 151 receiving yards for the Hurricanes.

Kaaya now has a touchdown pass in all 16 of his collegiate games, and at least two scores in all nine of his Miami home games.

By the time the game was seven minutes old, Miami was up 14-0 and seemed well on its way to avenging a 10-point loss at Nebraska last season.

Kaaya led that fast start, dissecting a Nebraska pass defense that came in having allowed 692 yards through the air in its first two games and struggled again.

It was Nebraska’s first true road game in the Sunshine State since visiting Miami in 1951. The Huskers’ last 22 Florida trips were for bowl games, 17 of them Orange Bowls including three where this Nebraska-Miami rivalry was forged. In all, they’ve played four times to decide the national championship, Miami winning three — starting with 1983, when Nebraska went for a two-point conversion when an extra-point probably would have been enough to clinch the title.

Miami deflected that pass away, and Hurricane football forever changed that night. And, ironically, two 2-pointers for Nebraska in the fourth quarter weren’t enough on Saturday.