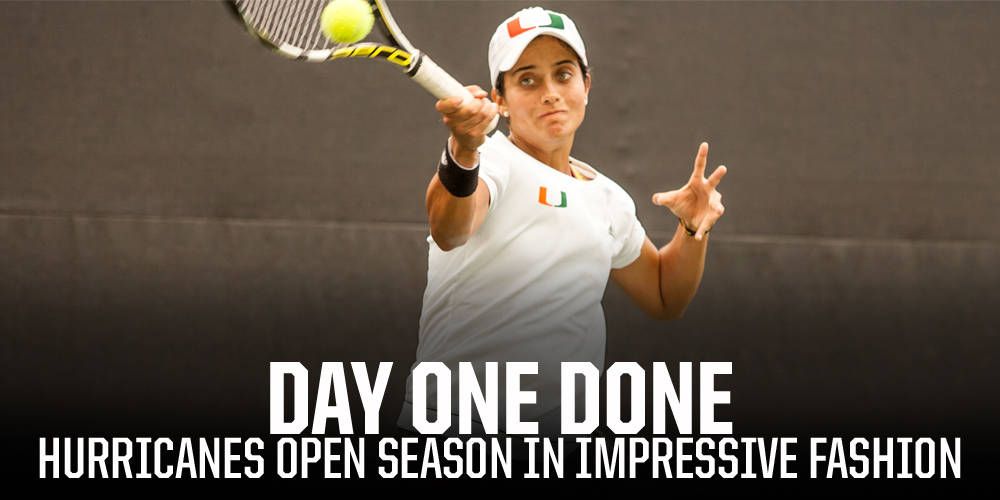 W. Tennis Goes 8-2 on Day One of Fall Invite

CORAL GABLES, Fla. – On the first day of the 2015 fall season, the University of Miami women’s tennis team came out in stellar fashion, dropping just two matches Friday at the Miami Fall Invite.

The Hurricanes posted a 5-1 mark in doubles at the Neil Schiff Tennis Center and went 3-1 in singles, with another victory by withdrawal and a sixth match left unfinished, but just two games from a Miami victory.

“Very excited to see the team compete and coach the young players up,” Miami associate head coach Laura Vallverdu said. “They are all being very responsive and seem hungry to implement what we talk about.”

Both Miami pairs in the Orange Doubles Draw posted comeback victories to form an all-UM final. In a back-and-forth contest, Madcur and Riobueno were able to notch a 6-4 victory over Alex Anton-Ohlmeyer and Megan Kurey of Georgia Tech.

Tanielian and Zhang jumped out to a 3-1 lead on the top-seeded duo of Frances Altick and Fernanda Contreras of Vanderbilt, but the Commodores won four-straight games to go up 5-3. The Hurricane duo responded by evening the score at five and then again at six, before eventually winning the match in the tiebreaker for a 7-6 (7-2) victory.

In singles action, Fuentes, the second seed in the Green Singles Draw, won her match over Clara Lucas of Pitt via withdrawal. Also in that draw, Madcur fell to Pitt’s Amber Washington, 6-2, 6-1. Tanielian’s match was the only one on the day left unfinished, as she was unable to complete hers due to rain. The newcomer led 2-6, 6-3, 4-1 after a stellar comeback following an earlier three-hour rain delay.

“I am looking for a very strong Saturday in terms of team vibe and their individual body language,” Vallverdu said. “Their tennis always shows when they are taking care of those things.”

Singles action will begin at 8:00 a.m. Saturday and after two rounds have been played, the final doubles contests will take place.

To keep up with the Hurricanes throughout the Miami Fall Invite, follow @HurricaneTennis.