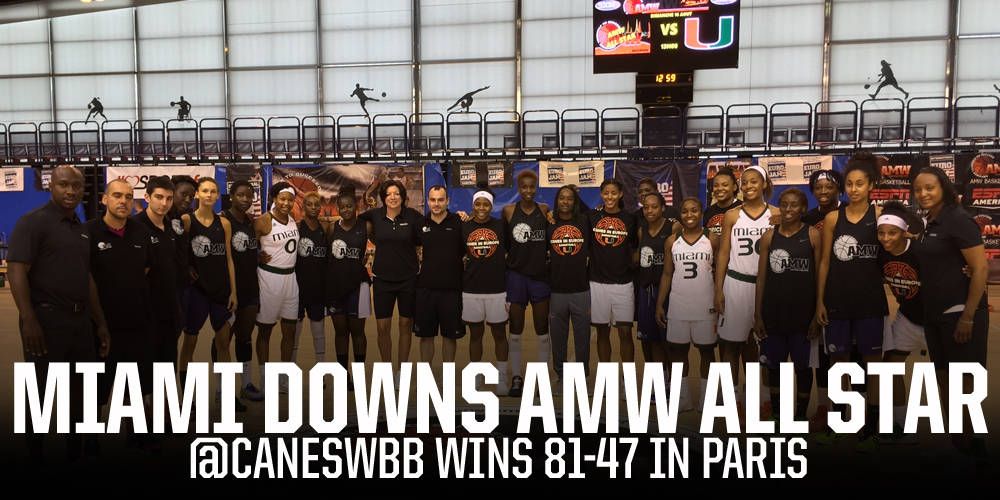 PARIS – The University of Miami women’s basketball team picked up a victory in the final game of its foreign tour, defeating AMW All Star 81-47 at Halle Georges Carpentier.

The Hurricanes started strong from the opening tip and raced out to a 13-3 lead and stretched the advantage to 26-14 at the end of the first quarter, paced by 10 points from Motley.

The second frame was more of the same from the potent Miami offense, as seven different players scored in the quarter to help the Hurricanes take a 45-27 edge into the intermission.

Sophomore forward Keyanna Harris and redshirt senior guard Michelle Woods both connected on a pair of three-pointers in the third quarter and Miami led 67-37 with 10 minutes to go. A balanced fourth quarter gave the Hurricanes the win by a final score of 81-47.

In addition to Davenport, Hayes and Motley, both Harris and Woods ended the contest with double figures. Harris had 13 points for the Hurricanes, while Woods scored 12 points on 4-of-6 (66.7 percent) shooting from beyond the arc.

Miami finished its four-game set overseas with a 2-2 record, earning commanding victories over both AMW All Star and BC Waregem of Belgium. Both defeats came to the senior national team of the Netherlands, with the second one a scintillating overtime affair.

The Hurricanes will wrap up their foreign tour by spending Sunday night and Monday in Paris before returning back to Coral Gables, Fla. Tuesday.

To track the University of Miami women’s basketball team during its final days overseas, follow @CanesWBB.

All statistics from the game are unofficial.