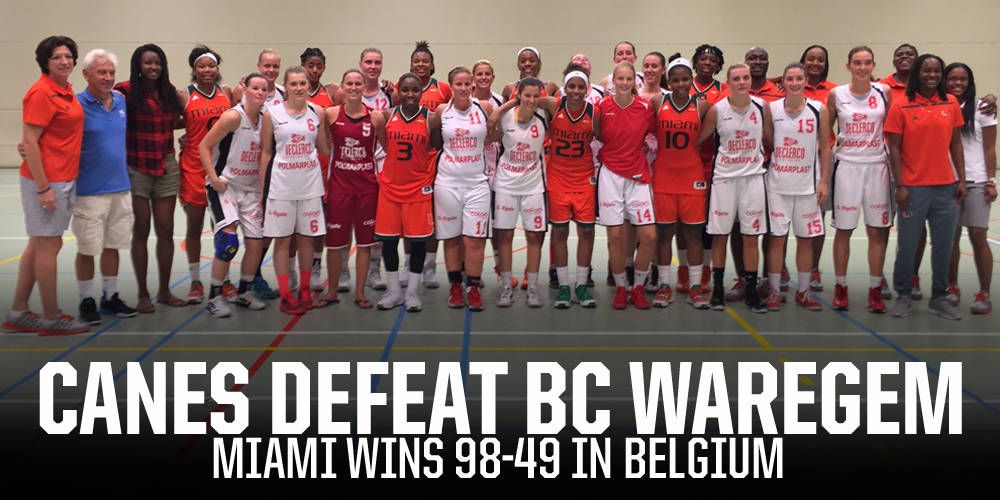 WAREGEM, Belgium – The University of Miami women’s basketball team won the third game of its foreign tour Thursday night, earning a 98-49 victory over BC Waregem at Sportcentrum De Treffer.

Facing the team Miami head coach Katie Meier played for as a professional, the Hurricanes put together a superb all-around effort for the win. Miami lead 20-11 after one quarter of play and then began to take control.

Hayes scored 10 points in the second quarter alone to help the Hurricanes build a 48-22 led entering the break. At halftime, Meier was honored with a speech by Marc Foucart, who coached her as a player with the team and is the coach now, as well as a picture presented to her by her former house mother, Gemma, in Waregem.

Junior guard Adrienne Motley scored nine of her 21 points in the third quarter and Miami took a 64-34 advantage through 30 minutes of play.

In the final session, the Hurricanes got hot from the field, shooting 12-of-20 (60 percent) from the floor and posting 34 points. Twelve of those points came from junior guard Jessica Thomas, who connected on three of her five three-pointers in the closing frame. When the final horn sounded, Miami had a 98-49 win.

Along with 22 points, Hayes had nine rebounds, including seven on the offensive end. Thomas recorded 19 points and a team-high 11 rebounds to give her a double-double, while also posting five assists to tie for the team lead with sophomore forward Keyanna Harris, who paced the Hurricanes with five steals. Redshirt senior guard Michelle Woods added 16 points in the win.

The Hurricanes travel to Paris Friday morning for the last stop on their tour of Europe and will take on AMW All Star at 7:00 a.m. ET (1:00 p.m. local time).

To keep up with the University of Miami women’s basketball team during its overseas travel, follow @CanesWBB.

All statistics from the game are unofficial.