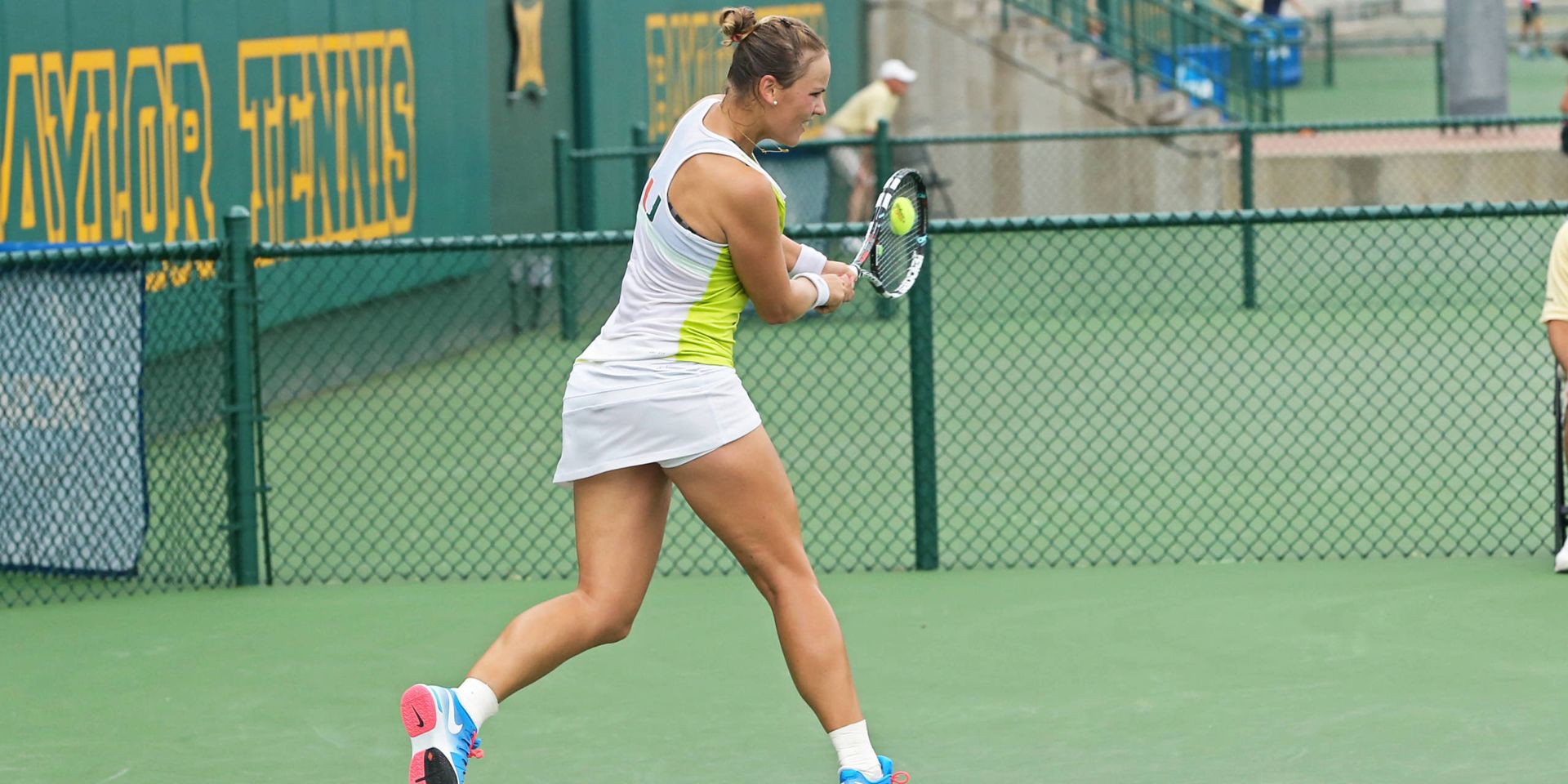 “Even though Steffi lost that match today, I’ve got to say she played great. She was incredibly poised,” Miami head coach Paige Yaroshuk-Tews said. “She played really the smartest I’ve ever seen her play against Loeb, which is what you need to do. Nerves were not an issue today . . . I felt that she woke up and she was ready to play. That’s what you’ve got to do if you want to be a big-time college player and you want to try to win a title.”

Loeb, the ACC Player of the Year, jumped out to a 3-1 lead in the opening set, but then Wagner got hot and took back-to-back games to even the set at three.

After Loeb won a game to go back up by one, the final three games of the set all went to Wagner. At 4-4, the junior from Amberg, Germany fought off three game points and broke Loeb’s serve to take her first lead and then closed out the set with a hold.

“We played Loeb a different way, a way we have never played her,” Yaroshuk-Tews said of what made Wagner so effective in the opening set. “We varied up some heights on her, we took part of the court that she likes playing on away from her, and we got the first set under our belt pretty handily I thought.”

In set two, Loeb won the first two games, followed by Wagner winning two of the next three to cut the deficit to one, at 3-2 for Loeb. The Tar Heel sophomore then took consecutive games to pad her lead and make it 5-2.

Wagner would not relent though, winning each of the next two games to get within one. However, Loeb broke Wagner’s serve to clinch a 6-4 victory in the second set.

Loeb came out strong in the final set, winning each of the first three games. Wagner battled back though, taking two straight games to get within one.

“Loeb makes you feel uncomfortable and she makes you kind of second-guess your strategy deep in games, deep in matches and deep in points,” Yaroshuk-Tews said. “Although I thought we handled it very well, in order to beat a kid like Loeb you have to be unwavering. There is no room to make mistakes. It was a high-level match. I couldn’t be prouder of Steffi. She came up a little bit short against a great opponent.”

Wagner finished her junior season as an All-American, a First Team All-ACC selection and the ITA National Player to Watch. She went 21-8 in singles matches, including a 16-5 mark in dual matches, 11-3 in ACC play and 14-8 against ranked opponents.

Ranked in the top 11 in in singles and top 20 in doubles all season long, Wagner was one of just 31 players in the country to compete in the NCAA Singles Championship and the NCAA Doubles Championship.

Wagner and freshman Sinead Lohan became the fourth duo in Miami program history to reach the quarterfinals of the NCAA Singles Championship the same season.

“Steffi made a great run here, played great tennis, and I think she got rid of some demons that she had,” Yaroshuk-Tews said. “I think that the win Saturday over [top-ranked Robin] Anderson is really going to catapult her into the next-level thinking, which is where she needs to be . . .  I think she put some things behind her in this tournament and she took a real step forward. It’s going to be fun to see what she does next season.”

To keep up with the Hurricanes throughout the offseason, as well as to learn more about University of Miami women’s tennis, follow @HurricaneTennis.