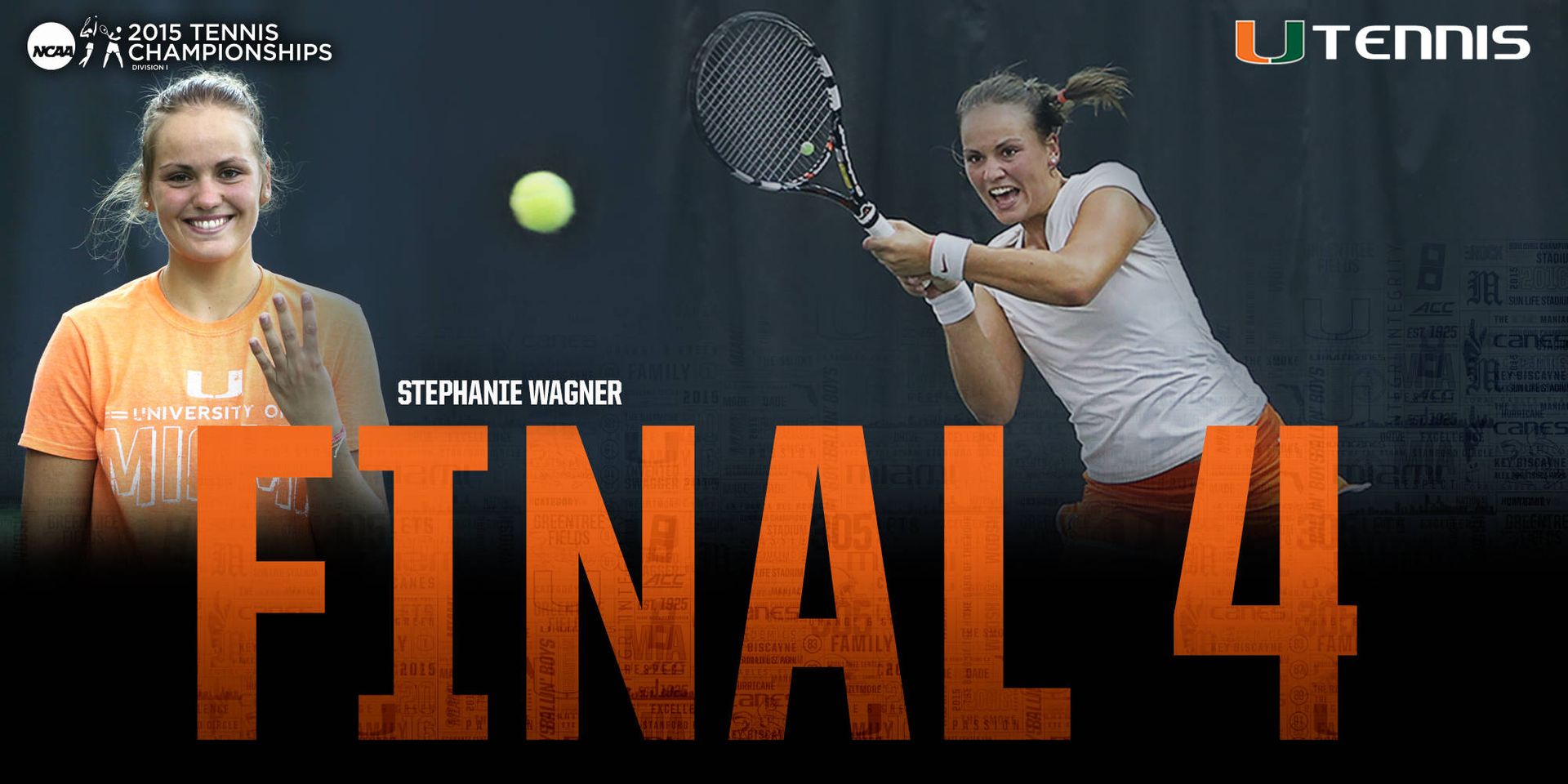 WACO, Texas – Stephanie Wagner of the University of Miami women’s tennis team defeated the top-ranked player in the nation, Robin Anderson, Saturday to advance to the semifinals of the NCAA Singles Championship.

The Miami junior opened set one the same way she did each of the next two, by taking the first game. Anderson then responded by winning three straight games to go up 3-1. The last of those three was the first of five consecutive breaks, leading to Anderson serving, ahead 5-3.

After Wagner fought off a pair of set points, Anderson clinched the first set on her third chance, taking it 6-3. Seven of the nine games in the opening set were breaks.

The second set was quite different than the first, as each of the first nine games were holds. Finally, leading 5-4, it was Wagner who came up with a break, clinching the second set, 6-4, to send the match to a decisive third set.

In set three, Wagner continued her hot streak, winning each of the first two games to make it four in a row. Anderson, a four-time All-American in singles, would not cave, winning back-to-back games to even the third set at a pair.

From there, it was all Wagner. The All-American and First Team All-ACC selection won each of the final four games, capping it with yet another break to clinch the match and earn a berth in the Final Four.

“In the third set I just started to play my game,” Wagner said. “I went for my shots, I took away her forehand, [I went] crosscourt a little bit more, I used more of the middle, and just played more aggressively than her.”

The win for Wagner was her fourth over a top-10 opponent in 2014-15, as well as the third of her career in a spring match, including the second over a top-five player. She won eight of the final 10 games en route to the victory over Anderson, who entered the match at 27-2 and had defeated Wagner in straight sets Feb. 8 at the ITA National Team Indoor Championships.

Wagner is the first Hurricane to make the semifinals of the NCAA Singles Championship since current Miami assistant coach Laura Vallverdu did so in 2010. Her appearance in the Final Four of the singles tournament will be the seventh in program history.

While Wagner advanced to the Final Four, Miami freshman Sinead Lohan fell in her quarterfinal match to Florida’s Josie Kuhlman, ranked No. 13 and seeded No. 9-16, 6-3, 6-4.

“Rough day for her,” Yaroshuk-Tews said. “Nobody wants their season to end, but the future is so bright for Sinead Lohan that I’m excited to be back out on court and work on things. She needs to work on a few things and when she does she is going to be even better than she was this year.”

Lohan, ranked No. 37, defeated three straight seniors ranked higher than her nationally to reach the Elite Eight and was one of just two freshmen, along with Kuhlman, to get to the quarterfinals.

The first ACC Freshman of the Year in program history, Lohan won the opening game of the match and then led 2-1, but Kuhlman charged back to go up 3-2. Lohan then held serve to even the first set, but Kuhlman won each of the final three games to take the first set.

In the second set, Kuhlman got off to a strong start, grabbing a 2-0 edge. Lohan then began to pick up her play, winning each of the next four games to go ahead 4-2.

However, it would not be enough, as Kuhlman took the last four games of the match to earn the victory and advance to the semifinals. Lohan finished her freshman season with a 23-4 record in singles play and posted 11 wins over ranked opponents.

“I’ve said all along that this is a special kid. She is such a winner. She is such a great person and such a respectful person,” Yaroshuk-Tews said. “She is such a hard worker. She hates to lose. She is such a competitor. I am so excited that this kid is a part of our program and she represents us in every facet just the best way that you can represent a program.”

Wagner will take on ACC Player of the Year Jamie Loeb of North Carolina in the semifinals Sunday at 1:00 p.m. ET. Live stats and live video will be available HERE.

“If she goes out and she plays with the same mentality that she played with the last half of that match today, she can be successful,” Yaroshuk-Tews said.

To keep up with Wagner’s match, as well as to learn more about University of Miami women’s tennis, follow @HurricaneTennis.