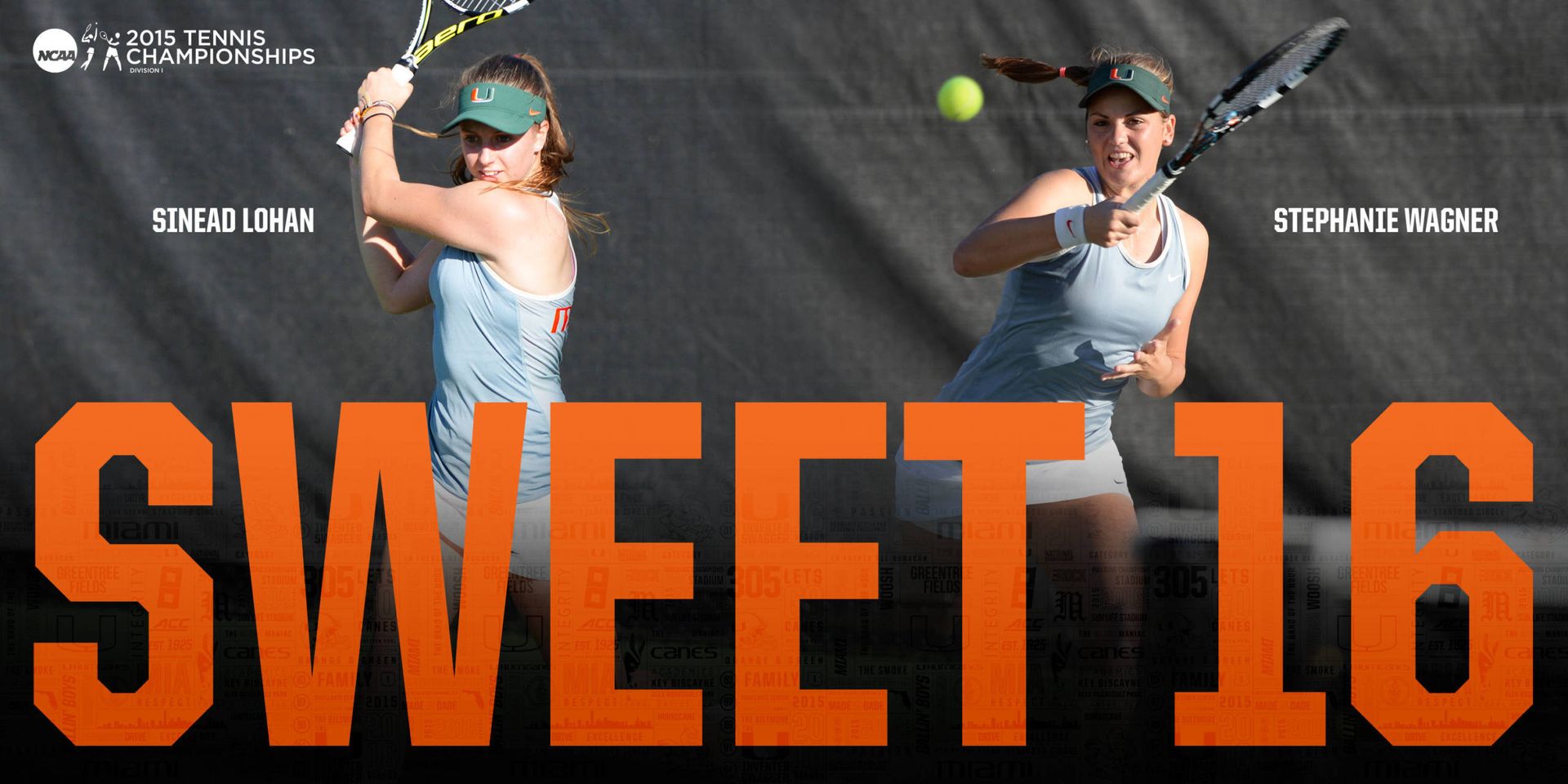 WACO, Texas – Two members of the University of Miami women’s tennis team are going to the Sweet 16 of the NCAA Singles Championship.

Junior Stephanie Wagner, seeded No. 9-16, and freshman Sinead Lohan both won their second round matches in straight sets Thursday at the Hurd Tennis Center to clinch trips to the round of 16.

“Steffi and Sinead are two great players. They have been leading our program all season,” Miami head coach Paige Yaroshuk-Tews said. “ . . . Having these two kids in the final 16 of the tournament I think just says a whole lot about all the work that they put in this season and says a lot about the future of our program.”

Although Lohan’s match started a few minutes earlier, it was Wagner who finished first, as she rolled to victory over Gumulya. The First Team All-ACC selection dropped the first two games, and then rattled off six wins in a row to take the first set, 6-2.

Wagner, ranked No. 11 in the nation, took the first two games of set two to make it eight straight victories. Gumulya, a Second-Team All-ACC pick, then began to battle back and eventually tied the second set at 3-3.

From there, it was all Wagner, as she won each of the final three games, including a pair of breaks, to clinch the match. Wagner, who already earned All-America honors by being seeded in the field, has now reached the Sweet 16 for the first time in her career, after falling in the second round each of the past two seasons.

“I’m excited that I won [in the first] two rounds,” Wagner said. “Obviously I’m not satisfied with that yet, but in comparison to the last two years, I’m of course happy I’m past the second round.”

Lohan, the first ACC Freshman of the Year in program history, won her match against Price in thrilling fashion. For the second consecutive day, she downed a senior ranked in the top 20 in the nation in straight sets, and this time it took an extra game in each set.

After falling behind 5-2 in the first set, Lohan took three straight games to even the score. Price then broke Lohan’s serve to go up 6-5, but Lohan, who staved off set points in multiple games, broke right back to send it to a tiebreaker. Lohan, ranked No. 37, lost the first point, but won seven of the final nine and took the tiebreaker, 7-3, to win the first set.

“I started off really slow. Caroline started playing with good intensity,” Lohan said. “I wasn’t really ready for her ball, but then I started accelerating my racquet and moving better. That got me into the first set, and then in the second set I knew that I had to be on her at the start.”

Lohan did indeed jump out to a fast start in set two, grabbing a 5-1 edge and making it 10 wins in the last 12 games. Price, a First-Team All-ACC honoree, then fought all the way back to even it at 5-5, but Lohan would not cave. The Waterford, Ireland native won consecutive games and clinched the match.

By reaching the Sweet 16, Lohan locked up 2015 All-American honors. One of just three freshmen to reach of the round of 32, Lohan will be one of just two freshmen in the Sweet 16.

“Having a freshman step in on a day like today and just be as calm and cool as she was just says a lot about how good Sinead is,” Yaroshuk-Tews said. “She’s been doing her thing all season. I think, playing behind Steffi, at times she was probably overshadowed a little bit, but as a staff and as a team we’ve known just how good she is.”

This marks the fourth time in program history that multiple Hurricanes have made the round of 16 of the NCAA Singles Championship, joining 2010, 2009 and 1985.

Miami is one of three schools in the nation with multiple players in the Sweet 16, along with UCLA and Cal.

To follow the action throughout the NCAA Championships, as well as to learn more about University of Miami women’s tennis, follow @HurricaneTennis.