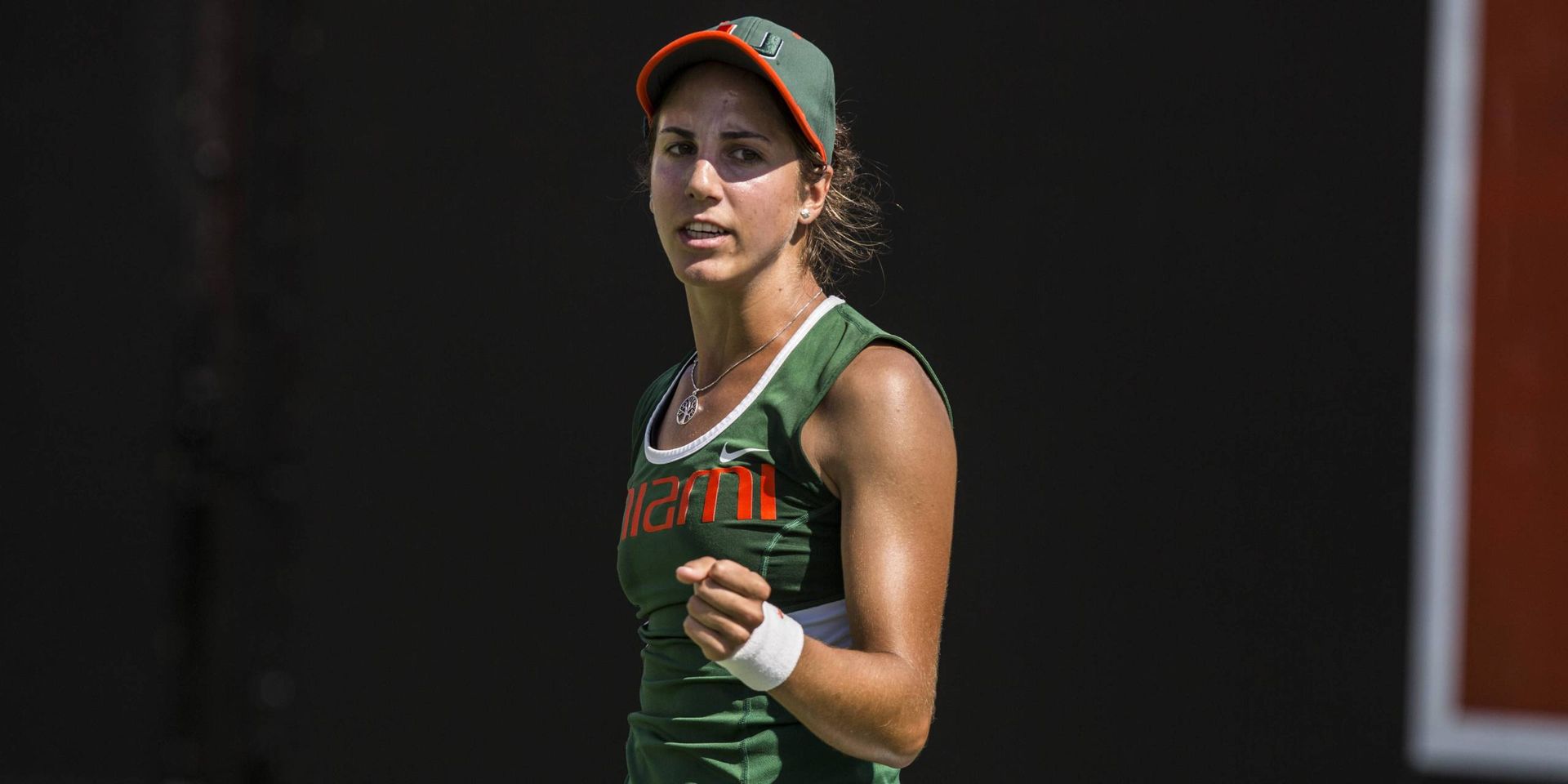 The Hurricanes, both seeded and ranked No. 15, have now advanced to at least the second round of the tournament in all 14 of Paige Yaroshuk-Tews’ seasons as the head coach.

“It’s always nice to advance. The girls played pretty well, especially since we had a new combination out there in doubles,” Yaroshuk-Tews said. “I was happy for them to get it going. I know that they’ve been waiting to play and they’ve been waiting to put finals behind them, so I’m happy that the tournament is underway. It’s always nice to get the first one under your belt.”

Miami (17-6, 12-2 ACC) jumped out to a fast start in doubles play to set the tone for the match. ACC Freshman of the Year Sinead Lohan and All-American junior Stephanie Wagner grabbed a 6-0 lead over Esther Zuniga and Taylor Hollander on their way to an 8-1 win.

Senior Monique Albuquerque and freshman Silvia Fuentes meshed quite well in their first match as a doubles pair. They won the first three games over Luise Intert and Rebeca Pereira and continued their strong play to the end, taking an 8-3 decision to clinch the doubles point for Miami.

“Monique and Silvia played great. They complemented each other well,” Yaroshuk-Tews said. “Monique did a great job leading out there and Silvia was just aggressive, loose, fiery, and going after her shots. That’s exactly how we’ve been telling her she needs to play. I was very happy with them.”

Miami put forth a stellar showing in singles against UNF (17-4, 6-0 A-Sun) as well, conceding over two games in just two of the 11 sets played and over three in only one.

Lohan, ranked No. 37, was the first to win her match. The Second Team All-ACC selection moved to 19-2 on the season with a 6-1, 6-1 victory against Michelle Valdez.

Once Wagner put Miami within a point of victory, three Hurricanes were close to clinching the match. It would end up being Fuentes who sealed the deal, as she took down Vazquez in impressive fashion, 6-0, 6-2.

“Steffi, Sinead and Silvia, from what I saw, they were just very on point. They’re hitting the ball well, it’s crisp coming off of their strings, you could kind of see it,” Yaroshuk-Tews said. “We saw it yesterday in practice and even today in practice. They’re hitting a crisp ball, a really penetrating ball. One, two, three [were all] dominant and that’s what we need to have moving forward.”

Albuquerque was one game from victory when play stopped, leading Intert by a score of 6-2, 5-3. Lileikite had a 6-2, 4-2 edge on Hollander and Zhang was ahead 6-5 in the first set on Cunningham when the match came to an end.

With the win, Miami moves to 11-0 all-time against the Ospreys. The Hurricanes will meet No. 23 Ole Miss in the second round of the NCAA Team Championship Saturday at 2:00 p.m. at the Neil Schiff Tennis Center. The winner advances to the Sweet 16 next week in Waco, Texas.

Live stats for Miami’s match against the Rebels in the final home match of the season will be available HERE.

To keep up with the team throughout the NCAA Championships, as well as for information on University of Miami women’s tennis, follow @HurricaneTennis.