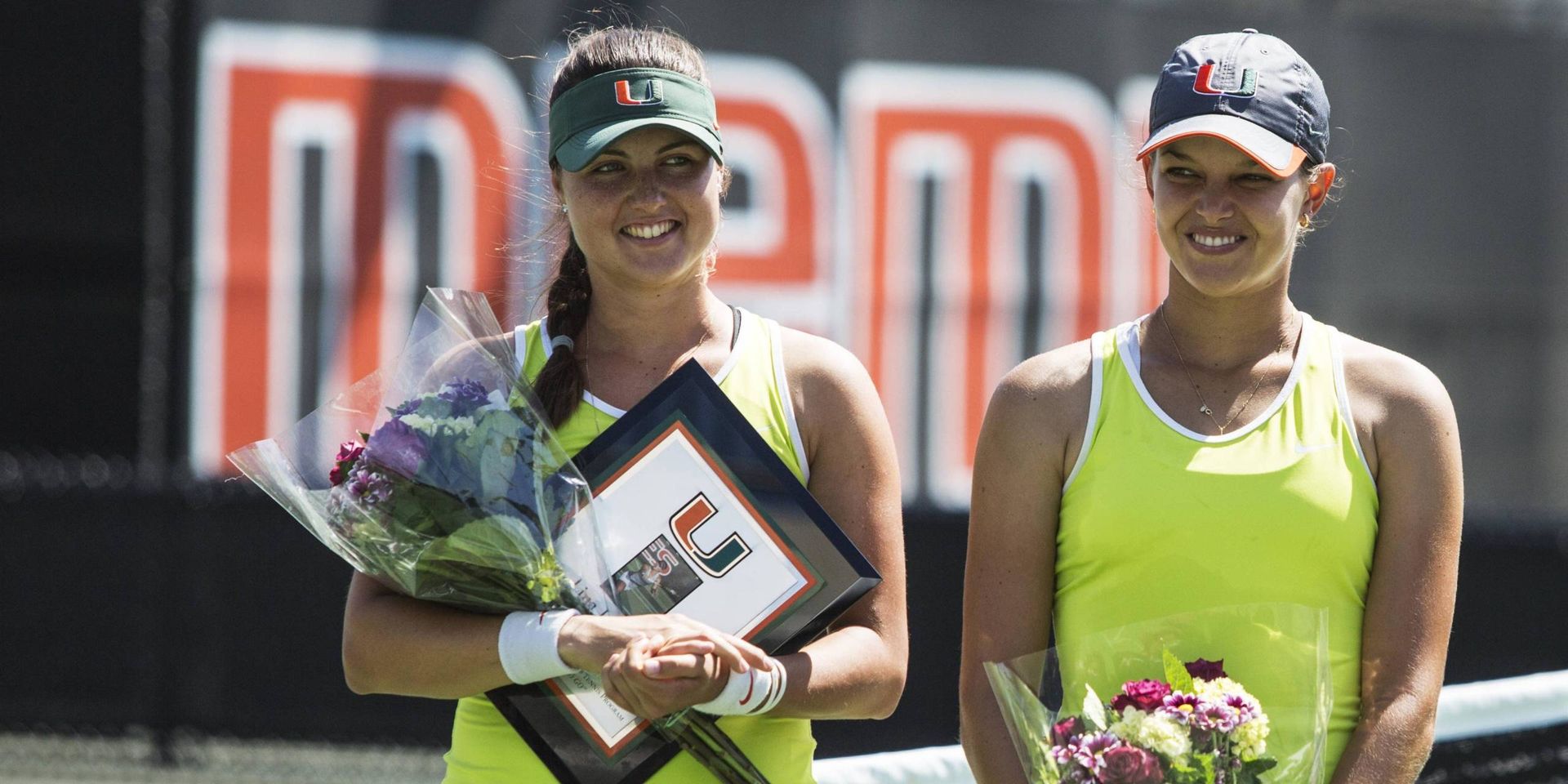 Seniors Monique Albuquerque and Lina Lileikite, honored before the match, helped the Hurricanes earn their sixth shutout win of the season and fourth in ACC play.

“Whenever you win a match 7-0 you’re happy. I think the girls played well today, but I think that our best tennis is still in front of us,” Miami head coach Paige Yaroshuk-Tews said. “I told them that in the meeting that I still think we’ve got better tennis in us, and what better place to showcase it than the postseason and we’re excited to see that.”

After dropping the doubles point Saturday, Miami (16-5, 12-2 ACC) quickly took control Sunday against the Panthers. The 71st-ranked pair of Lileikite and freshman Wendy Zhang knocked off Molly Wickman and Amanda Washington, 8-4, to give the Hurricanes a leg up.

Freshman Sinead Lohan and senior Stephanie Wagner then rolled past Katherine Castro and Lolade Ogungbesan for an 8-3 victory to clinch the doubles point. Albuquerque and junior Clementina Riobueno, ranked No. 44, led 6-3 over Audrey Ann Blakely and Callie Frey of Pittsburgh (2-17, 0-14 ACC) when action stopped.

“Girls came out ready to play today. I think they respect Alex [Santos] a lot, they know that he’s a good coach,” Yaroshuk-Tews said of the Pittsburgh head coach, her former assistant at Miami. “They know that they’ve got to be ready. A lot of them know that he knows their weaknesses, so I think that they were kind of, in that regard, on their toes and it was nice to see them come out strong. That’s how we’ve got to come out from this point forward.”

The Hurricanes were dominant in singles play, winning every single set and not dropping more than three games in any of them. Zhang, ranked No. 101, was the first to tally a point for the Hurricanes, winning the first 10 games of her match en route to a 6-0, 6-2 victory over Molly Wickman.

Within a minute of Zhang winning, Albuquerque did the same, putting Miami in front 3-0. Playing in the final regular season match of her career, Albuquerque won 6-1, 6-2 over Katherine Castro. Including Sunday, the Porto Alegre, Brazil native won 24 of the final 28 singles games she played this weekend.

The three matches remaining all went the Hurricanes’ way, with Silvia Fuentes the first to seal the deal. After winning her final nine games Saturday, the freshman won her first eight Sunday, making it 17 straight before she finally dropped on. Fuentes defeated Blakely, 6-0, 6-2, in her first appearance at the No. 2 position.

Wagner, ranked eighth, lost the first three games of her match and then won 12 of the final 15 to take down Ogungbesan, 6-3, 6-3. Finally, with all of her teammates looking on one court over, No. 115 Lileikite, defeated Frey, 6-3, 6-2, winning the final regular season match of her career in straight sets, just as fellow senior Albuquerque did.

“Trustworthy, mature, hardworking,” Yaroshuk-Tews said of Albuquerque and Lileikite. “What else do you want in student-athletes? These kids have put in a lot of hard work, lot of time, lot of sweat, lot of tears, and have really grown up along the way. So, they’ve been a lot of fun to be around and a lot of fun to have on our team.”

The Hurricanes finish the regular season in sole possession of second place in the ACC and will receive a double-bye in the ACC Championship this week in Cary, N.C.