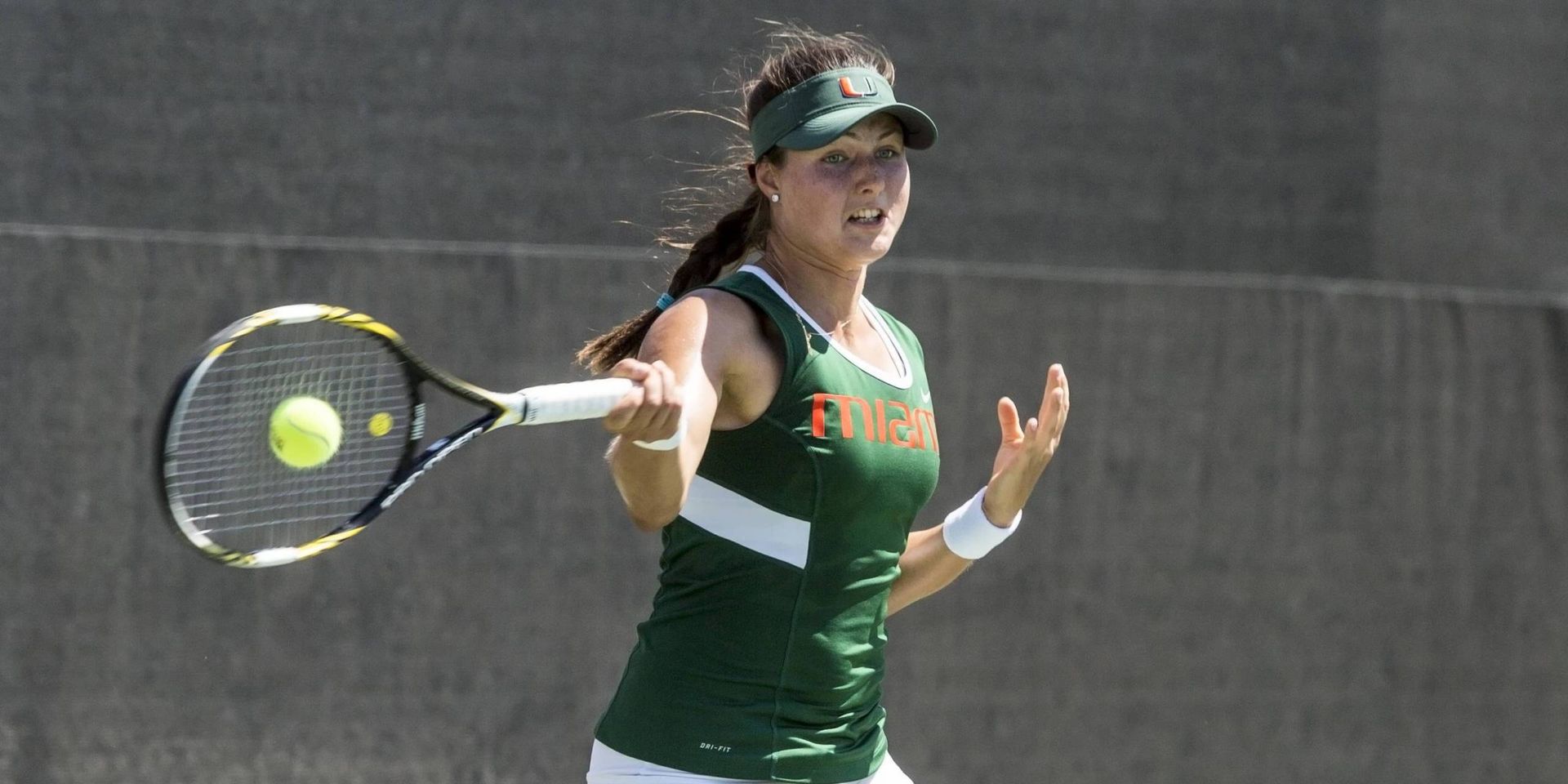 NOTRE DAME, Ind. – The University of Miami women’s tennis team recorded one of its most impressive victories of the season Friday night at Notre Dame.

In a match that began outdoors at the Courtney Tennis Center and then moved indoors to the Eck Tennis Pavilion due to rain, Miami (13-5, 9-2 ACC) defeated the 31st-ranked Fighting Irish, 5-2.

“First match this season where we lost the doubles point and won the match,” Miami head coach Paige Yaroshuk-Tews said. “To do that against Notre Dame on their turf is big. Proud of our fight tonight.”

The Fighting Irish clinched the doubles point when Allison Miller and Julie Vrabel came back from a 6-3 deficit for an 8-6 win over freshman Sinead Lohan and junior Stephanie Wagner.  This marked just the second time in 11 ACC matches that Miami dropped the doubles point.

Senior Lina Lileikite and freshman Wendy Zhang, ranked No. 63, were one game from victory over Jane Fennelly and Mary Closs when play ended, leading 7-5.

Miami got out to a hot start in singles play, but the match had to be moved indoors due to the inclement weather. The change of scenery did not slow down the Hurricanes though, as they quickly grabbed the lead.

Each of the three remaining matches went to a decisive third set and the Hurricanes needed to win two to come away with the victory. They got all three.

At one point, while No. 11 Wagner was still in the second set, both No. 115 Lileikite and freshman Silvia Fuentes trailed in the third, but both rallied back to help clinch the win.

Lileikite dropped the first set against Miller and was behind 3-1 in the third set, but the lone fourth-year player on the Miami roster won each of the final five games for a 4-6, 6-4, 6-3 win to put the Hurricanes ahead.

Fuentes clinched the victory for Miami, battling back from a 5-3 deficit in the third set to force a tiebreaker, which she won without dropping a point. The Ciudad Rodrigo, Spain native picked up a 6-2, 4-6, 7-6 (7-0) win over Closs to clinch the win for Miami.

“We were so strong in the thirds today,” Yaroshuk-Tews said. “We were on the run a lot playing inside and had to play brave. We fought hard tonight and played as a real unit.”

Miami will play its final ACC road match of the season Sunday at 11:00 a.m. at Louisville. Live stats for the match will be available HERE.

To track the match on Twitter, as well as learn more about University of Miami women’s tennis, follow @HurricaneTennis.