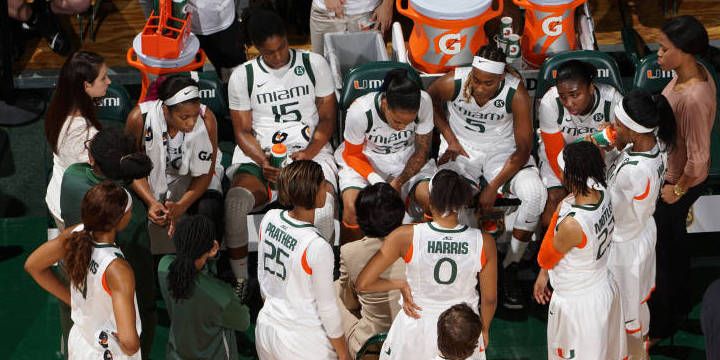 CORAL GABLES, Fla. – After reentering the receiving votes category of the USA Today Coaches Poll last week for the first time since Jan. 27, the University of Miami is yet again in that group.

The Hurricanes are one of 15 schools listed as receiving votes in the Coaches Poll released Tuesday afternoon, placing Miami among the top 40 teams in the nation.

The Hurricanes will face Wake Forest Thursday, Feb. 26 at Lawrence Joel Veterans Memorial Coliseum in Winston-Salem, N.C. The game is scheduled for 7:00 p.m. and the action can be heard live on WVUM 90.5 FM or WVUM.org.

Katie Meier‘s team will then wrap up the regular season Sunday, March 1 at 3:00 p.m. against No. 9/8 Florida State at the BankUnited Center in Coral Gables, Fla. This will be the senior day game for a trio of Hurricanes: guard Suriya McGuire, forward Necole Sterling and forward Jassany Williams.